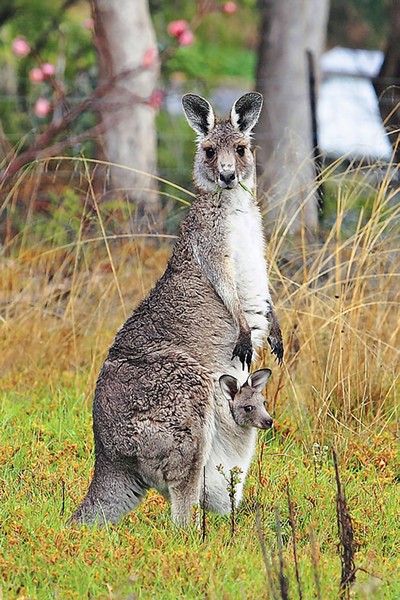 Image by Fir0002/Flagstaffotos via Wikimedia A marsupial baby develops in its mother's pouch, like this kangaroo and joey.

Ten minutes before a huge space rock — as wide as Humboldt Bay and half as long — barreled through Earth's atmosphere 66 million years ago, ending the Mesozoic Era with a bang, the ecological balance between dinosaurs and mammals was working fine. The two groups had been living and thriving alongside each other for tens of millions of years, each mostly keeping to their own ecological niches: mammals stayed small — no larger than today's raccoons — while dinosaurs grew to enormous proportions: a titanosaur might have weighed 100 tons. Mammals essentially filled the "small is beautiful" niche into which, in their absence, some terrestrial dinosaurs might have evolved. (Avian dinosaurs did, of course — we call them birds.)

This state of affairs — big dinosaurs, small mammals — lasted throughout most of the Mesozoic Era: Dinosaurs appeared about 225 million years ago, while the common ancestor of today's mammals dates to around 160 million years ago. The arrangement seems to have been beneficial to both groups — they both thrived and evolved new species — although there were exceptions. For instance, baby dinosaur fossils have been found in the stomach of an ancient omnivorous mammal, Repenomamus, and we can safely assume that carnivorous dinosaurs occasionally returned the favor.

An alien scientist, observing our planet just before the Big One hit, would have had no reason to predict any great changes from then until now: Dinosaurs would still rule the planet. Yet, in a cliché "geological blink of an eye," terrestrial dinosaurs were no more. Within a decade or two after the impact, they had starved to death, as photosynthesis virtually ceased under the thick, long-lived global dust cloud kicked up by the asteroid. Plants died and with them, creatures dependent on plants for food, and carnivores that were dependent on them, all the way up the food chain.

A few adaptable mammals — some 20-odd species — somehow scraped and scavenged through the catastrophe, their small size (and therefore minimal calorie requirements) giving them the edge over larger, hungrier animals. Anything bigger than a rat didn't make it. Once the atmosphere cleared and the climate settled down, photosynthesis restarted. Small, opportunistic mammals that had survived the catastrophe — probably omnivores with an excellent sense of smell — emerged into a dinosaur-free world, and evolution did the rest, aided, perhaps, by the appearance of new, energy-rich plants: legumes. Within half a million years, a newly green Earth was home to mammals as large as sheep.

Today, mammals come in three groups, all of which have antecedents from that time: placentals, monotremes and marsupials. While they have common features — warm-blooded metabolism, hair and, of course, mammary glands for feeding their young (hence "mammals") — each group has its own characteristics. Monotremes (e.g. platypus and echnida) lay eggs, while marsupials (e.g. kangaroos, koalas, opossums) birth small, frail babies that develop to term in their mothers' pouches. Placentals, by far the most successful — 6,000 species of us! — are characterized by giving birth to well-developed young, some of which can function effectively just minutes after birth — think of whales and wildebeests.

And some, of course, can't — think humans.

Barry Evans (he/him, barryevans9@yahoo.com) wonders if, absent that asteroid, dinosaurs would have evolved big brains with all the concomitant problems that come with intelligence.