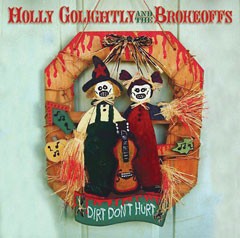 Musician, songwriter and vocalist Holly Golightly hasn't slowed up much. Since her time in the mid-’90s with the garage band Thee Headcoatees, the all-female counterpart to Billy Childish's Thee Headcoats, Golightly has released over a dozen full-length studio albums. Her styles, like her moods, swung with each of her records, from rockabilly to folk to garage rock to country, marking an eclectic distinction between each offering.

After collaborating (separately) with British garage stalwarts Billy Childish, Bruce Brand and Dan Melchior, Golightly teamed up with Texas musician "Lawyer Dave" Drake for her 2007 release You Can't Buy A Gun If You're Crying, a stripped down record with a primitive sound. The lo-fi self-production allowed for more space to accentuate the subtleties: rusty acoustic guitar strings, bottleneck slide riffs, scrappy percussion and dual harmonies. Golightly's new offering, Dirt Don't Hurt, recorded on analog in Spain, has honed this gravel sound to an art.

Golightly and Lawyer Dave sound like a two-person hootenanny. There are plenty of pots-and-pans (literally) percussion, stringed-instrument bashing and soulful harmonies, akin to Gillian Welch and David Rawlings. Golightly's songwriting, however, contains a great deal more dark humor. Her "revenge" songs, such as "Burn Your Fun," "My 45" and "Three Times Under," are often sung as if they're simply having too much fun, and you never take Golightly's "threats" too seriously.

The opening cut, "Bottom Below," is a swampy rave-up that sets the tone for the eccentric mixture of Delta Blues, Carter Family country-folk and garage rock. "Burn You Fun" is a haunting cautionary tale of "good time" coming to an abrupt end, via the second coming, with a spare guitar-tremolo riff (and an occasional pot/pan banging) propelling the song. "Slow Road" has the swagger of a drunken waltz, complete with an eerie zither-like guitar delivered by Lawyer Dave.

Even though Golightly garnered the most attention in the U.S. through her collaboration with Jack White (on the White Stripes' Elephant) and her inclusion on the soundtrack of Jim Jarmusch's film Broken Flowers, she has retreated from her garage or pop sound. It's interesting that however far back Holly Golightly reaches into the back catalog of lost, obscure American folk music for inspiration (like Harry Smith's Anthology of American Folk Music), she can never really dispel her garage roots. And because of this, Dirt Don't Hurt sounds strangely distinct and contemporary. Like fellow Brit (and friend) Pete Molinari, Golightly has successfully distilled American roots music, transcending mere revivalism. To paraphrase her earlier album title, truly, Golightly is none other.