The Aggrolites, plus Flowmotion reimagined, Tony Furtado and Playing for Change 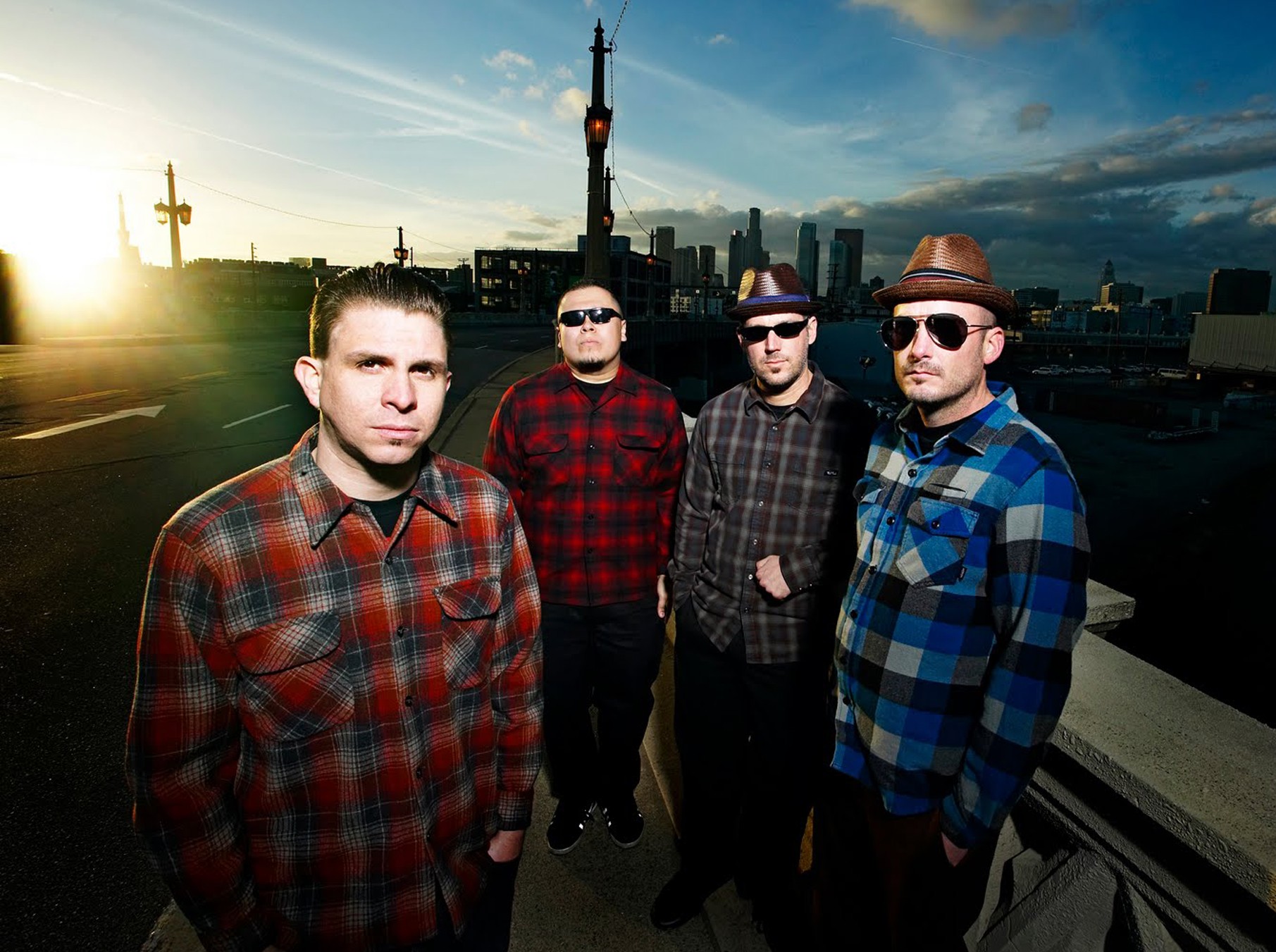 A long time ago, when I was first discovering reggae music, I picked up a three record compilation called The Trojan Story. Produced in the early ‘70s, it was a look back for the British label starting with the ska era, moving through rocksteady and ending with the dawn of reggae, with the main focus on hits from the late ‘60s. The artists -- The Maytals, The Ethiopians, The Skatalites, Lee "Scratch" Perry and Derrick Morgan among them -- were all Jamaican. Their music was quite popular in England, and not just because of the Caribbean immigrant population -- it was also party music for working class British youth and eventually became the basis for the British second wave "2 Tone" ska movement of the ‘70s and ‘80s.

Years later I came across a few instrumental tracks by a band called The Aggrolites. From their sound, I figured them for a ska/rocksteady band from back in the day, but it turns out they're young musicians from L.A. who describe their sound as "dirty reggae."

"Not all reggae is about Rasta, red, green and gold, Bob Marley and smoking marijuana," said Aggrolites organist Roger Rivas, who sports a "Los Angeles born and bred" T-shirt in a recent band video. The Aggrolites first came together 10 years ago when members of two retro reggae/ska bands, The Vessels and The Rhythm Doctors, joined forces for a session backing the above-mentioned Jamaican veteran Derrick Morgan. "Both bands were into the same sound, music from that same period in reggae history," said Rivas. "There's just something about the way it makes you feel, there's this groove -- you can't stop moving."

The Aggrolites were soon getting gigs on their own, and lead guitarist Jesse Wagner and Rivas have been playing together ever since. While they've worked backing other artists including rocksteady pioneer Prince Buster, the late Joseph Hill from Culture and Tim Armstrong from Operation Ivy and Rancid, they've also built a catalog of their own original songs, four albums deep (five if you count the recent retrospective, Live Unleashed Vol. 1), invariably with that "dirty" retro reggae sound. Good stuff.

A spring tour of the western states brings The Aggrolites to Humboldt Brews Thursday with The Mike Pinto Band. Originally from Philadelphia, Pinto and company are now based in Long Beach, appropriate since the trio explores a dub/ska/surf sound reminiscent of Sublime.

At the Jambalaya that Thursday night it's a Seattle quintet formerly know as Flowmotion, recently renamed The True Spokes. After a decade working the jammy circuit, as the band declares on its ReverbNation page, "Ladies and gentlemen, we're living in a post-jam world." That means lead singer/guitarist Josh Clauson no longer fronts a jamband. Instead the band is moving toward alt. rock with folky harmony vocals, using folks like Wilco, My Morning Jacket and Blitzen Trapper as models.

More vinyl dance grooves Friday as Gabe Pressure and DJ Red take turns on the turntables for an ‘80s night at the Jambalaya.

More funk and soul Saturday night at the Jam with The Staxx Brothers down from Seattle bringing a cool blast of what they call "hard ass soul." The name may reference the classic southern soul/funk label, but judging by the new disc, Jungle Cat, this a more modern take, with hip hop-style vocals shot through with rock guitar (and the band includes a couple of "sisters").

Blues harpist Mark Hummel kicked some ass when he brought his superstar harmonica blowout crew to the Duzer in January. Now he's back, this time playing a Saturday night gig at the Riverwood Inn with master blues guitarist Steve Freund.

Also on Saturday night, the Fortuna Concert Series presents The Latin Peppers at the Fortuna Monday Club. The all-star collection of local musicians led by trombonist Jimmy Durchslag (with Tim Randles on keys) plays, you guessed it, Latin jazz. (And they play it well.)

Tribute of the week: Come Together: The Beatles Concert Experience Saturday night at the Arkley Center for the Performing Arts, which goes a step beyond cover versions of the Fab Four's many hits. I "experienced" the show last time it came to town and I have to say, the musicians did a good job -- of course it's hard to miss with that iconic set of tunes. The mostly baby boomer crowd was singing along from beginning to end. What did not work so well were the costumes -- bad Beatle wigs and matching suits for the early years, really silly Sergeant Pepper outfits for the psychedelic era. "Go go k'joob" indeed.

PDX band-o-the-week: The Tony Furtado Band. I still think of Furtado as the banjo jammer from Boulder, but he's now happily settled in Portland and plays bottleneck slide guitar as much as the banjo. Pick up his new album, Golden, on the merch table when he plays at Humboldt Brews Sunday. And for those who want to emulate that bluesy slide sound, he offers Furtado-made slides, complete with instructions.

While electronic dance music producers/DJs typically play late at night, this weekend you can hear some womp in the daytime (along with other music). The occasion is the grand opening of Green Future Soil Products running from 10 a.m. until 5 p.m. out on West End Road. Friday the Deep Grove Society gang holds court; Saturday it's Cacao (Datablend), who recently opened for Slugabed, along with members of the Talking Heads cover band Naive Melodies; Sunday the Deep Groovers return, taking turns with Cacao.

You'll also find the DGS folks at the Jambalaya later that night for the usual Sundaze. The dance music continues Monday at the Jam with a World Famous show featuring MartyParty. Born Marty Folb in South Africa, he landed in San Francisco during the dot.com boom and worked as a software engineer while learning Ableton Live and using it to craft his own unique "Africanized" electronic dance "party" music.

It started back in 2005 when Mark Johnson and Enzo Buono heard a soulful street musician, Roger Ridley, playing guitar for change, singing the Ben E. King classic "Stand By Me" on a Santa Monica sidewalk. They ended up recording the song, then traveled around the world gathering versions of it by a collection of buskers and others, which they wove together via digital magic to make a video. At this point well over 40 million people have watched that viral vid on YouTube. Ridley has since passed on, but the project dubbed "Playing for Change" has gone on to encompass full albums, a DVD, a killer website (playingforchange.com) and a foundation supporting music education internationally. There's also The Playing for Change Band, a collection of musicians including Grandpa Elliott, a harmonica player from New Orleans and vocalist Clarence Bekker, from Surinam via Amsterdam (who both sang on "Stand by Me") along with players from Zimbabwe, Congo, South Africa and New York. The PFC Band plays a CenterArts show in the Van Duzer Tuesday, March 13. As Johnson explained (in another YouTube vid), "Playing for Change was born out of the idea that we have to inspire each other to come together as a human race, and music is the best way to it." I couldn't agree more.