Our e-quake and tsunami savvy has grown, with one jolting exception 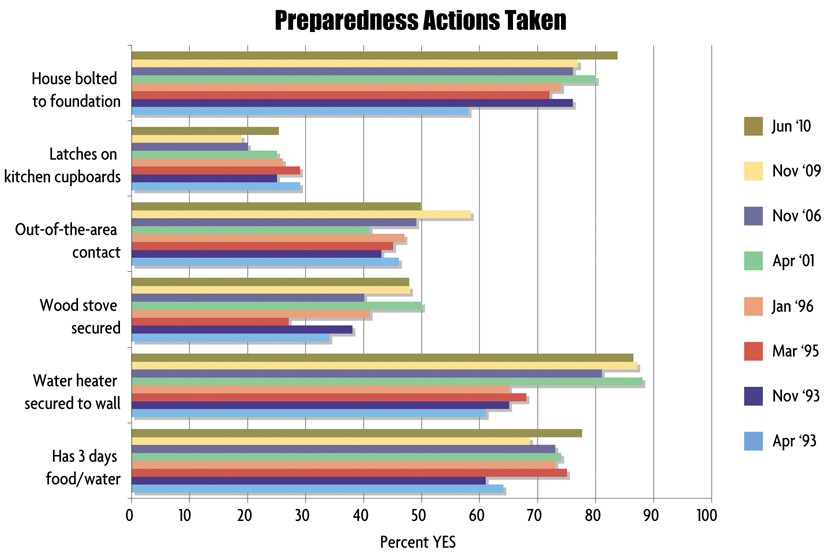 First the rumble, loud, louder, LOUDER until it thunders under your feet. Then BAM! CRACK! And the terrifying shaking, the deafening, dread symphony of rattle, thud, jingle and smash.

When it's over, you crawl out from under the sturdy table you dove under the second you realized it was an earthquake -- right? didn't you? -- pick your way through the mess to the front door, pry it open and peer out. Chaos. Houses, including your own, askew on their foundations, power poles toppled, drooping wires crisscrossing the impassable, rubbled streets.

Whoa, that was big. Your thoughts go askittering -- where's my wife, where are my kids, my prescription's almost out, hope we still have water, is that gas I smell? You hear far-off sirens and relax: Help is on the way. Apparently, many of your neighbors are kicking back with the same comforting thought.

Uh, good luck with that. In a disaster such as a major earthquake, which could happen here on the North Coast, help could be a long time coming, says Lori Dengler, geophysics professor and chair of the Humboldt State University geology department. It's called a "disaster" for a reason.

"By definition, a ‘disaster' means that all the people who need help can't get it immediately because our services are overtaxed and our roads may be impaired," Dengler says. It's not, that is, the same thing as an "emergency," like having a heart attack or your house catching on fire. "Those things are bad for you, but the community can deal with them."

Dengler is the lead kick-in-the-pants with the HSU-based nonprofit Humboldt Earthquake Education Center, which since 1985 has been trying to convince people they need to be ready to take care of themselves in the moments and days immediately following a disaster. Since 1993, she and her crew have been surveying Humboldt residents to measure the success of the center's awareness campaign. They've done eight surveys to date (spotty funding precluded more). Overall, the survey results show that people's earthquake and tsunami savvy has increased as have their pre-disaster preparations. Everybody knows now, for instance, that it isn't safe to be in the tsunami zone after the first wave retreats. And nearly everyone now knows that a tsunami could arrive within minutes following a huge local earthquake. And just about everybody and their dog knows about the "Cascadia Subduction Zone," the mashing of tectonic plates that could give us major grief. And lots of people have bolted their water heaters to the wall (it's the law, besides). Back in 1993, fewer people were clued in about these things.

But there's one area of disaster awareness in which our community has markedly faltered. In the 1996 survey, the education team added the question, "Who do you think has the primary responsibility for helping people during the first 12 hours after a strong earthquake or other disaster?"

Sixty-seven percent of the respondents that year said they -- themselves, their relatives, their neighbors -- were responsible, and 18 percent said the government was responsible. That's kind of what Dengler expected.

"People are resilient here on the North Coast," she says.

Dengler doesn't know why more people have come to expect the government to help them in the immediate after-period of a disaster. She suspects events such as Hurricane Katrina, in which there was much fingerpointing at FEMA even though it's not technically a first-responder, might have skewed how people think about responsibility and the government.

"There have been other social science studies, as well, that have suggested that people expect services from the government that they may not have had in the past -- that expectations have increased over the decades," says Dengler.

There may be hope for us yet, however. In the June 2010 survey, 28.9 percent said they expected the government to be their first responder, and 52.6 said they were relying on themselves.

"I need to go back and check those numbers more carefully, but it looks like we're seeing an increase in people saying they are responsible for helping themselves in the immediate aftermath of a disaster," Dengler says. "We've been really pushing that in our messaging."

Maybe that 6.5 shaker in January last year rattled some sense into some of us, too. According to results on another part on the survey, that quake -- and a series of more severe ones in 1992 -- seemed to trigger a greater expectation of damaging earthquakes.

But don't wait for a disaster to shake you out of your stupor. Get ready now. Dengler says talking about the mundanities of preparedness, rather than scary stories, actually seems to spur more people into action. You can start now by getting tips on how to prepare, and more, at www.daretoprepare.org. (Among them: Strap things down, make a disaster plan and make a disaster kit.) And you can take part in the statewide ShakeOut. On Thursday, Oct. 20, the drill begins at 10:20 a.m. -- might as well drop and cover with the rest of them, just in case. Check out www.shakeout.org for more info.

Or you can just kick back and wait for disaster to come. Just don't count on help afterward.