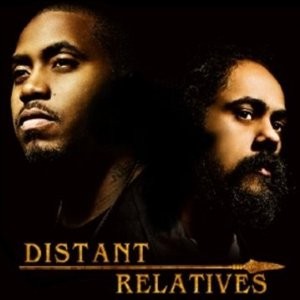 Listening to Distant Relatives, it's easy to imagine Damian Marley and Nas being related -- they perform as though they've spent a lifetime playing together. No wonder. They're both internationally successful and respected artists who celebrate their African heritage, especially on this latest effort. Damian Marley, of course, is also known for being Bob Marley's youngest son. Likewise, Nas -- full name, Nasir bin Olu Dara Jones -- grew up with a musician father, jazz player Olu Dara.

Separately, Nas and Marley are good. Together, they're phenomenal. Having collaborated on the hit "Road to Zion" on Marley's 2006 Grammy-winning Welcome to Jamrock album, they had a good start to becoming a famous duo. In interviews, Marley has made it clear that he and Nas wanted something that was different from their solo work. Scheduled for release on May 18, Distant Relatives achieves just that, crossing genres and irresistibly mixing reggae, hip hop and rap.

Among the highlights off the new album: "As We Enter," which is definitely the radio hit. The beat fits perfectly with the lyrics, and Marley's and Nas' voices blend flawlessly. "Tribal War," featuring Somali rapper K'Naan, has a cool sound, combining African drumming with the traditional hip-hop beat under lyrics pointing out the ways in which the contributions of Africa to the world aren't respected. This song carries the same feel as an ancient war dance. It's a pop-out on the album.

"Disappear" is a cool, mystic song, one of the better hip-hop/rap numbers on the album. Nas especially shines. Marley and Nas share the floor on "Patience," a solid song that stands out for its mysterious feel and electronic/reggae beats. "My Generation" is the main hip-hop song on the album, another great track offering a very positive message.

"In His Own Words" is another high point. This spiritual, romantic song -- "I hold mirrors up/Give combinations of pain, joy, fear, and love/Through my perspective/I can see Jah reflection"  -- features Damian's brother Stephen in a guest appearance.

I'd say "Strong Will Continue" is the best song on the album, very intense -- it will get you pumped! This track sends the message of not giving up and that, if you keep trying, you will eventually succeed. The duo fills this extra long song with not only a catchy beat, but inspirational lyrics with a good meaning behind them.

And not only is Distant Relatives an album you'll want to listen to again and again, but the profits go toward building a school in the Congo, Marley and Nas' way of giving back to the continent that has given so much to all of us.

Note: Damian Marley and Nas kick off the official Distant Relatives tour on Friday, May 21, with an all-ages show at the Arcata Community Center.