Distracted: The Erosion of Attention and the Coming Dark Age 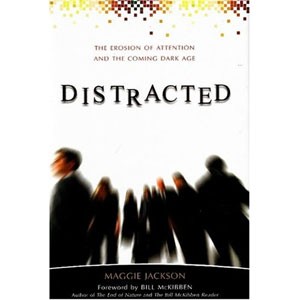 So Maggie Jackson is a columnist for the Boston Globe who -- that's mine, new ringtone, like it? Theme from Mad Men. Hi, no way, she did? Maybe, bye. So this book, which Wired magazine really didn't like, ’cause -- oh man, look at that score! Do you believe this? Anyway, because like multi-tasking: duh. Dude! Text from my mom -- I'm like way late for, I don't know, something. See ya.

The problem with the concept of distraction these days is having a clue about what you might be distracted from. For Maggie Jackson it's attention and memory, which she sees as the keys to intimacy, meaning and culture. They're threatened enough -- and central enough to civilization -- that she's warning of dark ages ahead.

Actually the great Jane Jacobs' last book, Dark Ages Ahead, is better on that scenario. But Jackson folds in a lot of reporting as well as facts to make her central argument: "Relying on multitasking as a way of life, we chop up our opportunities and abilities to make big-picture sense of the world and pursue our long-term goals. In the name of efficiency, we are diluting some of the essential qualities that make us human."

Jackson is worried about consciousness sliced and diced by the technologies conveniently packaged in iPhone arrays, and workplaces now reconfigured because of them. She quotes a study of workers which concluded that they "not only switch tasks every three minutes during their workday but that nearly half the time they interrupt themselves." Others are tethered to their jobs 24 hours a day because of these engines of access, so they're forced to be their own multi-taskmasters. She quotes a psychiatrist asking, "How do you know you have ADD or a severe case of modern life?"

We all know this is crazy, but is it dangerous? If we are indeed "losing skills needed to thrive in an increasingly complex world: deep learning, reasoning and problem-solving," then it's worth considering.

Sure, Jackson goes over the top at times, and it's ironic that she includes a lot that seems to distract from her central argument. But then, the sideshows of such social screeds are often entertaining (as in another new critique, Blubberland by Elizabeth Farrelly for MIT Press). Still, when your scope is "how we live and what that means for our individual and collective futures," you can mostly just start the discussion.

Jackson provides historical background, some deft reporting and even some counter-examples, like the attention being paid to how we pay attention, which includes new interest in forms of Buddhist meditation. Of course, who has time to read it?