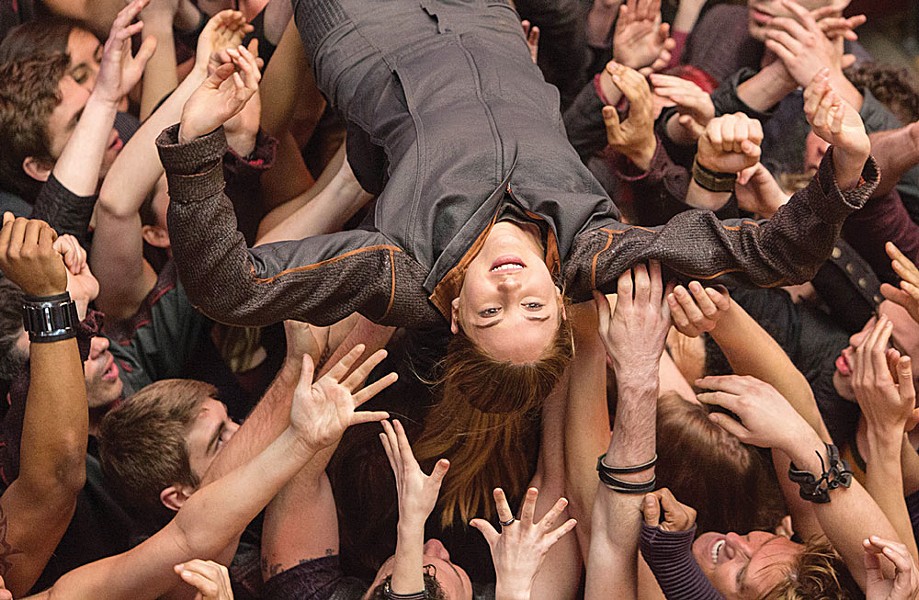 DIVERGENT. The need for yet another dystopian near-future, teen-centric melodrama is dubious at best. Not only has the theme been covered exhaustively in recent years, but it reeks of millennial pandering and uninspired adaptation. It's as if studios that missed the brass ring, failing to acquire the rights to Suzanne Collins' Hunger Games juggernaut, were left sucking their teeth. Apparently, the only way to market movies to young adults these days is to adapt a new, successful novel (series!), as faithfully (read: literally) as possible. Hollywood dodged a bullet when Veronica Roth's Divergent saga became a mega-seller. The rusty gears of production creaked once more into motion for one more obvious cash grab. But I digress.

In a post-apocalyptic Chicago, society struggles on, divided into five distinct factions. Each is responsible for the administration of some vital sphere: farming, soldiering, arbitration, etc. When children come of age, they take a chemical test to help them decide on their path in adulthood. Some, like our heroine Beatrice, (Shailene Woodley) have mental faculties outside the restrictions of the test. They are called divergent, and must hide their true identities and toe the line, lest they be caught up in a nebulous totalitarian witch-hunt. Beatrice, born into a family dedicated to selflessness and service, elects the soldier's life. It's not easy going at first, but Beatrice proves herself the better woman, rising above the taunts of classmates with social and genetic advantages — and her own shortcomings — to move up through the ranks. Along the way, she uncovers some sinister plans for cross-factional genocide, young love and the measure of her own strength.

Divergent relies almost entirely on its production design and cinematography — both striking — for its storytelling momentum. Unfortunately, this means that a rather straightforward narrative plays out predictably against an attractive backdrop. Woodley is a capable, appealing actor (her turn in The Spectacular Now absolutely gutted me) but she's still pretty new to this. With that earlier movie as counterpoint, it seems she needs the help of an insightful, involved director: someone who can help her get to the emotional center of a character and dig out the real person in there. She's got the talent to do it, but in the case of Divergent, no one is pitching in to make it happen. PG13. 139m.

MUPPETS MOST WANTED. I love the Muppets — who doesn't? They are a part of the fabric of my childhood security blanket. So I can't quite make up my mind when it comes to these new Muppet movies. On one hand, the thought that they will bring joy to new generations of movie lovers, and maybe warm the hearts of their rapidly aging parents makes me feel pretty good. And I think co-writer/director James Bobin (Flight of the Conchords) has pure intentions: His love and respect for these puppet oddballs is evident in every frame. But Disney owns the Muppets now, Jim Henson is long dead, and my cynical side conjures up images of a cartoon mouse with dollar signs in his eyes trying to reanimate a corpse. Maybe that's just me.

Picking up immediately after the triumphant closing number from The Muppets (2011), Most Wanted finds our heroes contemplating a break to write and rehearse new material. Into their midst swaggers "talent agent" Dominic Badguy (Ricky Gervais), with a convincing pitch for a European tour and an ulterior motive. Having busted out of the Gulag, Badguy's partner Constantine — the world's most dangerous frog and a dead-ringer for Kermit — plans to get the band back together for a series of heists, culminating in the theft of the British crown jewels. The Muppets touring show provides the perfect cover and a fall-group.

Because it's faithful to the characters and spirit of Muppetry, I can't fault Most Wanted. It lacks some of the transcendence, the all-encompassing feeling of the original movies, but then again, I've done some aging and skin thickening in the intervening decades. At any rate, this is undeniably fun, funny and charming. It delivers some satisfying cameos, particularly by Ty Burrell as a dim-witted French inspector and Tina Fey as a weirdly obsessed Russian prison guard. The ending won't surprise anyone, but that won't stop you from having a good time. PG. 112m.

2014 OSCAR NOMINATED ANIMATED SHORT FILMS. With my luck, these will have vanished from the Minor by the time anyone reads this. But, on the off chance I'm wrong, they're worth a look. I didn't find them as compelling as the live action shorts (although the in-between material is a lot funnier), but they are another testament to the refusal of the imagination to submit in the Roman coliseum that is the movie industry.

Two of the shorts, which couldn't be more different in form or narrative, tied for my vote. Feral, an American entry, uses impressionistic black and white art naïf to tell the scary, lyrical story of a boy raised in the wild, adopted by a hunter and brought into human society: ambiguous, pretty and vaguely disturbing. Possessions, from Japan, is reminiscent of Miyazaki's most magical realism, telling the story of a traveling handyman in the Edo period. He takes shelter in an abandoned shrine and is haunted all night by the colorful ghosts of inanimate objects: humorous, pretty and distinctly Japanese in its tone and technique. NR. 102m.

3 DAYS TO KILL. A bored Kevin Costner as a CIA tough guy on one final assignment to save his own life and spend quality time with his daughter. Not the Luc Besson action movie you hoped for. PG13. 113m.

300: RISE OF AN EMPIRE. Xerxes returns in his golden booty shorts to battle a legion of Greek abs. The convoluted 300 sequel has a few good action sequences, but the comic writing is tragic. R. 102m.

NEED FOR SPEED. Framed street racer Aaron Paul is out of jail and out for vengeance via stunts and chases that make up for a forgettable plot. Cue explosion. PG13. 130m.