The secret’s in the peppers 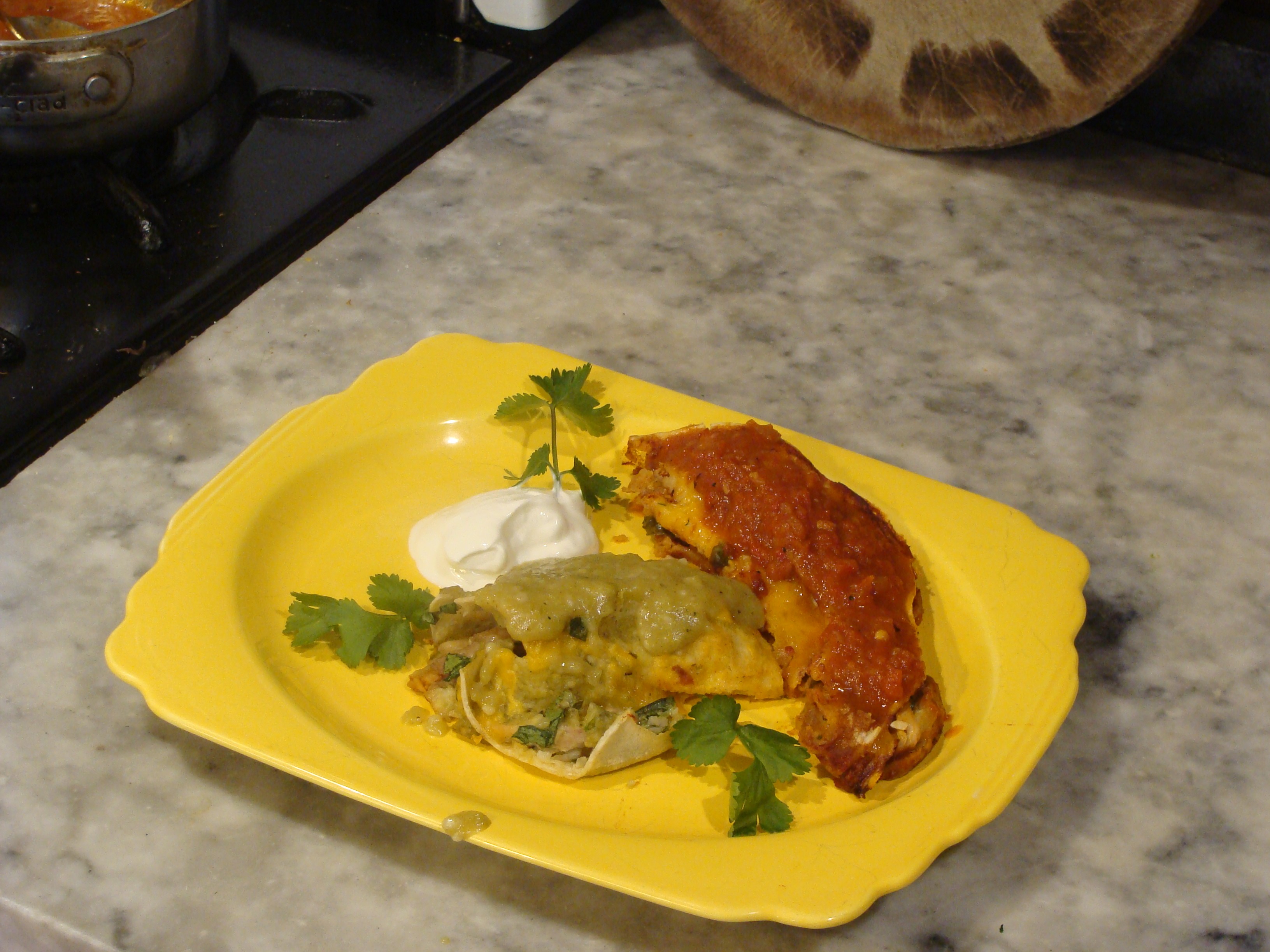 I'm so white. I feel nervous about even suggesting recipes for enchilada sauce. What chutzpah! Honestly, I am not any kind of Mexican master chef; I've used the same enchilada recipe from The Vegetarian Epicure my whole life. Besides, we live in California -- trying to make my own Mexican food at home seems like more effort than it's worth. Rita, Luzmila or Alma can make whatever it is with aplomb and low, low prices.

That said, my mind was blown when my brother Max, fresh from the ethnic haven of Fruitvale, Oakland, arrived home bursting with Smug Tales of the City, including: a) What The Urban Gentlewoman Is Wearing and b) a really wonderful enchilada sauce that takes much less time than my tomato-based 1970s stand-by.

Enchiladas are not usually my favorite dish. They are inextricably tied with memories of fourth grade potlucks and usually seemed to involve gallons of tomato sauce, under-salted hippie beans and congealed cheese. As an adult, making adequately seasoned frijoles became feasible, but the tomato sauces I used, while tasty, lacked a certain je ne sais quoi (¿no sé por qué?). Basically it seemed like a bland dish.

Fundamentally enchiladas are quite simple: tortillas and sauce and cheese, maybe some protein filling. But like most good Mexican food, the genius lies in the execution of familiar ingredients. These days I make more interesting fillings, and lately, much tastier sauces.

This week we're mostly exploring sauces. Good enchilada fillings can be found or invented without much trouble. To try out my sauce recipes, I filled corn tortillas with shredded chicken, a generous half cup of one of the sauces, chopped spinach, pine nuts and crema (sour cream thinned with water and a little lime juice). After rolling and arranging them snugly in a baking dish, I poured the remaining sauce over the rolls, sprinkled on a little cheddar and baked them for half an hour.

These simple but deep-flavored sauces, made primarily out of peppers, were a revelation. Still working off the classic French model that a cooked sauce should be complex, it hadn't occurred to me that a sauce could be made of virtually nothing but peppers and not be too acrid. I also include my jazzed-up version of the old Vegetarian Epicure sauce, improved by -- you guessed it -- a roasted pepper.

Max's Sauce
This sauce is the simplest. If you use stock, it will be more full-bodied, but just agua works too.
Makes about 2 1/2 cups.
1 and 1/12 cup each chicken stock and water or 3 cups water (keep another cup of either in reserve)
4 dried New Mexico peppers (red, available at Rita's Mexican groceries)
at least 3/4 t. salt (I use more but I love salt)
Juice of one lime
1 t. cumin (do you say COOmin or CEWmin?)
Bring liquid to a boil in saucepan. Add peppers. Boil till soft over medium flame, about 30 minutes. If liquid looks like it's getting low, add more from reserve. You should gradually add most or all the reserve. Remove saucepan and pull stems off peppers with tongs or brave fingers. Pour pan contents into blender and add remaining ingredients. Blend thoroughly. Strain and adjust seasonings.
Make enchiladas

Arno Holschuh's New Mexico Hangover Sauce (my favorite)
Makes about 2 1/2 cups
2 Anaheim peppers
1 pasilla or poblano pepper
1 jalapeno pepper (unless you don't want any heat, then skip)
1 Tbl. butter
1/4 cup flour
1 cup milk
1 cup chicken stock, veggie stock or water
1 cup water in reserve
Juice of 1/2 lime
3/4 t. salt (or more) to taste
1 t. cumin
First, roast the peppers over an open flame. I use my stove burner. Rotate peppers with tongs until blackened all over. This should take about seven minutes. Remove peppers to sink and rub under warm water till blackened skin is removed. Cut off tops and remove pith and seeds. You'll want to wear gloves when seeding jalapeno. Taste just a little jalapeno -- if it's a very hot one, you may want to use a half, or even a quarter of it. Chop peppers roughly. Set aside.
In a saucepan, make a roux with butter and flour, which means melt the butter over a medium flame and gradually whisk in flour so it looks like clumpy melty sand. Add milk a bit at time, whisking furiously, still at medium heat. You should now have a thick white sauce. If there are lumps keep whisking. Keep whisking regardless. It's a whisky business. Gradually add second cup liquid, raising heat so it comes to a low simmer, and yes, whisking. It should be the consistency of a thin pancake batter -- if its too thick add more liquid, too thin, keep simmering. When desired consistency is reached pour into blender. Add peppers, cumin, salt and lime. Pulse till coarsely homogenized. Taste for seasoning adjustments. If it's too thick to pour flowingly, add a little liquid and reblend for a second.