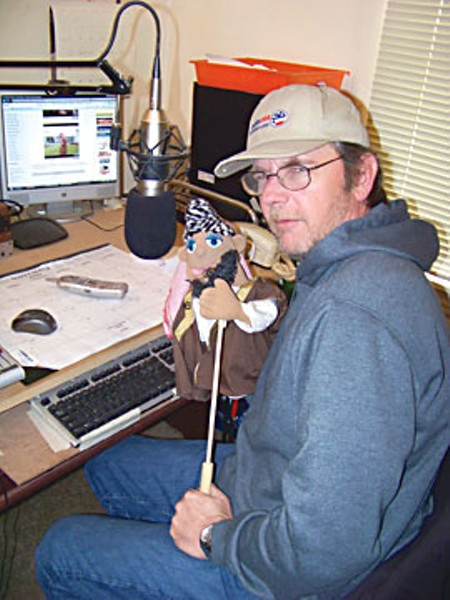 You're sitting at your computer staring at something called Old Glory Radio. Near the top of the page is a podcast of a "promotion" for a reality TV show in Arcata, with the announcement that "Residents of Arcata are not eligible."

You hit the play button: Sinister music attends an eyes-cast-down view of a litter-strewn beach. A sandal. A beer bottle. More trash. Words appear: "Only one will survive to the end." You see a hand buried in the sand. Then more words: "Outwit. Outplay. Outlast. Survivor Arcata."

Searching the archives, you find newscasts and interviews hosted by Old Glory Radio's founder and producer, Tom Fredriksen, in his home studio with a backdrop of desk flags, an eagle emblem and a small photo of Sarah Palin; a puppet show starring Uncle Abdul and the Sheik; a blog; and on-scene news reports: Fredriksen, marching alone in Eureka in front of the courthouse to rally support for the McCain/Palin ticket, with the song "One is the loneliest number" as soundtrack. Fredriksen, afterward, on a bare mattress, coughing weakly in a staged hunger strike he declares he'll continue until the Republicans come out of hiding to march with him to the sea. Fredriksen, straightforward journalist all of a sudden, conducting sympathetic interviews at a Sisters of Perpetual Indulgence picnic in support of same-sex marriage. Fredriksen, marching alone again, dressed like Yasser Arafat, holding a "Save ANWAR" sign and shouting, "Don't drill in America!" Fredriksen mocking Barack Obama. Fredriksen mocking George Bush.

What is Old Glory Radio? And, content aside, is it even "radio" -- or a harbinger of the future?

It's both. Fredriksen also broadcasts traditionally -- he threw the switch last November for Old Glory Radio News/Talk AM 1650, a licensed FCC Part 15 low-power AM station transmitted by a short antenna on the roof of Fredriksen's modest little house to about 15,000 people around Myrtletown and east Eureka, and maybe 10,000 more just beyond -- Fredriksen has had reports that his voice sometimes drifts across the bay to Arcata to jerk some knees.

"I have no illusions, it's not reaching the whole county," Fredriksen says of his AM station.

The station plays international and national news, and Fredriksen's own local content. He plans to add more. Even so, the AM thing is just a sidekick to his main concern, the Old Glory Radio "Internet television" that he's been doing for about two years and whose audience has only grown.

So Fredriksen's massively excited about the possibilities of influencing voters -- his chief goal, he says -- with the New Media. Still, he's reluctant to give up on traditional radio. He'd go low-power FM, like Blue Ox Radio (97.7 FM), if he could afford it -- it'd cost $30,000 to $40,000 for a low-power FM license, he says, compared to the $5,000 he spent for low-power AM. Even adding in the $10,000 he spent upfront to set up the equipment, initially just for the Internet broadcasts, and the monthly $100 to maintain everything, it's the cheapest route.

And he'd love for the big AM stations to do some daily local programming -- by anyone, liberal or conservative.

"Radio stations, all they are now are rooms full of computers and satellites," he says. "To me, local radio is some guy or a gal sitting down in front of a microphone and saying, ‘All right Eureka, what's going on with this Marina Center? Here's my two cents. Does anyone have anything to say? Our phone number is blahblablahblablablablah. That's my motivation for putting up the AM station here. That, and to shame the Republican Party."

Ah, the Republicans -- he's begged them to join him. "Nothing but crickets," he says. "I think that the Humboldt County Republican Party exists for the sole purpose of being a social organization."

(Patricia Welch, chair of the Republican Party of Humboldt County, says she's posted on the Party's window the fliers Fredriksen has given her, and sent out e-mails on his behalf. But her people are mostly volunteers and retirees, she says, and not inclined toward satirical marches.)

So, anyway: If the Internet's where it's at, and the locals aren't biting, why bother with traditional radio?