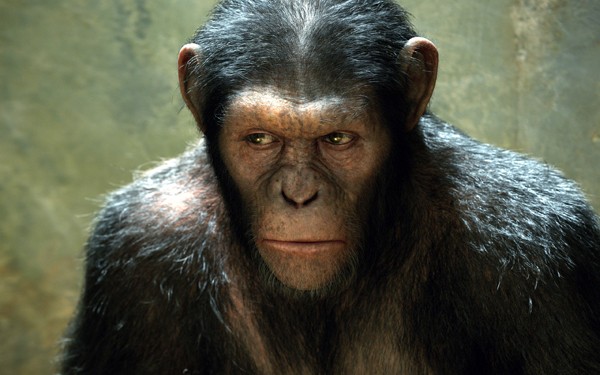 RISE OF THE PLANET OF THE APES. Virtually everyone of my age or so who goes to movies no doubt remembers the original Planet of the Apes, released in 1968. Who could forget the startling final scene when the humans discover the ruined Statue of Liberty, not to mention the over-emoting Charlton Heston whose subtlety mode clearly never developed?

Like most films that went on to be franchises, however, the subsequent sequels just became increasingly bad. So, with Rise of the Planet of the Apes, filmgoers get another chance to see an attempted reboot of a series. As you might expect, the film is replete with references to the original, including the line “take your dirty paws off me, you damned dirty ape,” as well as homage to other films such as King Kong.

But at its core, Rise taps into the trope of humankind sowing the seeds of its own destruction by scientists who are ignorant of the ultimate effects of their experimentation. In this instance, the scientist is Will Rodman (James Franco), who is trying to find a cure for Alzheimer’s using chimpanzees as the guinea pigs for his drug. He has a very personal reason for pursuing this path as his father Charles (John Lithgow) is approaching the final stages of that form of dementia.

Unfortunately, when his most promising chimpanzee, Bright Eyes, goes berserk and is shot, his efforts seem doomed. Not to worry though: The narrative has a surprise that sets up the rest of the story. From here on out, we watch one very intelligent chimpanzee rise to become a leader of the revolution. In getting there, Will continues his experiments, secretly at first, and finds a love interest (Freida Pinto, Slumdog Millionaire).

The gradual build to the revolt of the chimpanzees is actually handled quite well, and audiences will no doubt enjoy the climactic scene set on the iconic Golden Gate Bridge. In addition, Franco is always an interesting actor and so is Lithgow. In the end then, this is a reasonably enjoyable commercial film, a comment I couldn’t make about much of the summer fare.

As it turns out, it is not the apes that lead to the apocalypse but a substance developed by humans. I can imagine the end of humanity, but I always thought it would come at the hands of politicians or religious fanatics. PG-13. 110m. At the Broadway, Mill Creek, Minor and Fortuna.

THE CHANGE-UP. I remember with some fondness the late-'80s heyday of the body-swap comedy, so the admittedly thin premise of The Change-Up doesn’t break any new ground for me. On the other hand, it’s nice that this, a major studio release, is based on an original screenplay (by The Hangover scribes Jon Lucas and Scott Moore) rather than just repopulating some half-forgotten story from decades past -- or worse, a fondly remembered and perfectly executed one. (When the trailer for the remake of John Carpenter’s The Thing played, I started looking around for stuff to throw at the screen, but that’s a conversation for another day).

Jason Bateman and Ryan Reynolds play longtime friends who’ve charted diametrically opposed paths through life. Dave Lockwood (Bateman) grew up poor and has spent his adult life burning the candle at both ends to get through college and law school, to get the big house and the nuclear family and the better car. Mitch Planko (Reynolds) is a no-account stoner playboy and would-be actor with a strained relationship to his oft-betrothed father, played with customary composure by Alan Arkin. After a convivial drinking evening, the buddies wish for each other’s lives while simultaneously peeing in the wrong fountain in downtown Atlanta, and presto change-o.

Bateman and Reynolds are both terrifically funny actors when they’ve got the right material to work from and a director who can help them play to their strengths. Fortunately, those two elements are generally present in The Change-Up. The script is genuinely funny, despite a somewhat uneven tone and one or two over-the-top gags that don’t quite succeed. The second act gave me some of the biggest laughs I’ve had in the theater recently. Director David Dobkin (Wedding Crashers) steers with a sure hand, and elicits strong performances from the leads.

Reynolds plays Planko in full-on Van Wilder mode, with Bateman as the sort of straight man one generally expects him to play. After the switch, both guys get a chance to play against type a little bit. Bateman especially shines as the foul-mouthed perpetual teenager stuffed into a suit, trying to navigate the foreign terrain of adulthood, marriage and corporate law. Leslie Mann stands out, too, as the long-suffering Mrs. Lockwood, whose confusion at her husband’s inexplicable personality change highlights the feelings of distance and loneliness that his career-focus have bred in her.

Even if the movie slows and softens a little toward the end, and the dialog is a little coarser than it may need to be -- don’t get me wrong, I’ve been known to curse like a sailor, but overuse lessens the impact -- and the script isn’t exactly full of surprises, The Change-Up is solidly made, often hilarious and even occasionally touching. R. 113m. At the Broadway, Mill Creek and Fortuna.

FINAL DESTINATION 5. Can that be right? Are we really on our fifth one of these? Oy. Anyway, a group of co-workers receive a premonition that saves them from a terrifying suspension bridge collapse. But they were, like, supposed to die or something. So death stalks them. Rated R for death and stuff. 92m. At the Broadway, Fortuna and Mill Creek.

THE HELP. What was a book is now a movie. Black and white women in 1960s Mississippi reject social norms and form an unlikely friendship through a secret writing project. But their bold sisterhood puts them all at risk in the segregated South. Sounds like a hanky soaker. Rated PG-13. 146m. At the Broadway and Mill Creek.

30 MINUTES OR LESS. A small town pizza delivery guy's mundane life is altered when he's kidnapped by criminals, fitted with a bomb-filled vest and forced to rob a bank. And it's a comedy, people. The film's plot has apparently rankled the Pennsylvania family of a man who was tragically killed eight years ago in a strikingly similar case. Will that hurt its box office? Do you care? Rated R. Whoa, only 83m. At the Broadway, Fortuna and Mill Creek.

SNOW FLOWER AND THE SECRET FAN. May we interest you in a multilayered international film? In 19th-century China, 7-year-old girls Snow Flower and Lily are bound together for eternity. In present day Shanghai, their descendants form an oddly similar bond. Somewhere in there is a secret fan. Don't toke up before this one kids. You'll get confused. Rated PG-13. 105m. At the Minor.

The Arcata Theater Lounge keeps it hilarious this week. In reverse chronological order: on Sunday, it serves up Leslie Nielsen's first career redefining outing as Lt. Frank Drebin in The Naked Gun. Saturday, Dan Aykroyd and John Belushi encounter countless legendary blues/soul musicians on their "mission from God" in The Blues Brothers. And on Friday night, yuk it up with Stanley Kubrick's light and jaunty Full Metal Jacket. Careful: see all three movies consecutively and you'll likely never get those laugh lines off your face.

COWBOYS AND ALIENS. Daniel Craig and Harrison Ford star in this film set in 1873 Arizona Territory about... well, you know. Rated PG-13. 118m. At the Broadway, Fortuna and Mill Creek.

CRAZY, STUPID, LOVE. Steve Carell portrays a fortysomething who tries to cope after his wife cheats on him. Rated PG-13. 118m. At the Broadway and Mill Creek.

HARRY POTTER AND THE DEATHLY HALLOWS: PART 2. The boy-wizard becomes a man-wizard in the final installment. PG-13. At the Broadway and Mill Creek.

THE SMURFS. We couldn't get anyone on staff interested in reviewing this movie. But it's about Smurfs, if you're wondering. PG. 102m. At the Broadway, Mill Creek and Fortuna.