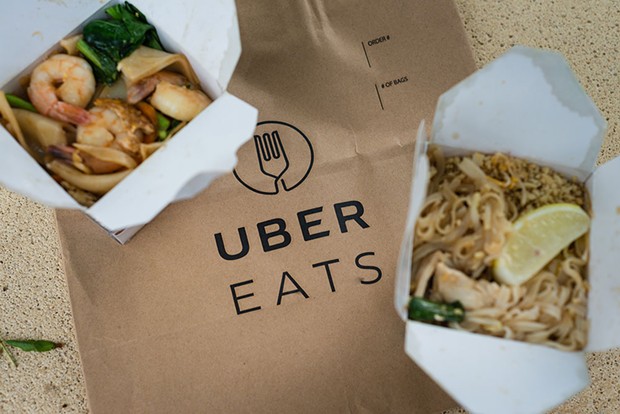 When, at already-in-your-pajamas o'clock, with Netflix alerting you the next episode will start in seven seconds, you realize you must have a bacon cheeseburger or a poké bowl, throwing a few extra bucks at a delivery app sounds like a bargain. Plus tip, of course — you're not an animal. But how much of a deal that delivery will be for the restaurant preparing your meal is another question.

Uber Eats made its incursion into the North Coast in October, deploying its small roster of drivers to service restaurants and their hungry, convenience-loving customers. A free download of the app reveals a dozen or so restaurants each in Eureka and Arcata, shuttling everything from Big Macs to oysters on the half shell. The company's website touts the benefits of fast delivery, the ability to "promote your business to our rider audience" and increased orders. The site reads, "Our top restaurants earn on average over $6,400 per month*." Qualified at the bottom of the page: "*Based on calculated global average for top 25 percent of active restaurants in the month of August 2016." (Uber Eats did not respond to emailed questions from the Journal.)

Diver Bar and Grill owners Shawn Stoops and Dawn Watkins say the service had a rocky start. There didn't seem to be enough drivers, leading to steak dinners and pizzas sitting for half an hour or more until the order was canceled or Stoops ran out to deliver it himself. Some of the late-night drivers earned poor ratings from the restaurant in the beginning, says Stoops. "We've had people smelling like weed, we had a dude walk out on a $90 order" instead of waiting for servers to finish boxing it up. The Diver isn't alone in its dissatisfaction, either. China Buffet manager Phoebe Huang says the delays caused the restaurant to ditch the service. She says, "We don't use that because before, when our orders are ready, we were waiting for 30 minutes. And I don't want to lose my customers."

While the diner only pays around $4.50 more for a given order, and the driver takes the usual trip fee plus tip, Uber Eats takes 30 percent of the cost of the meal off the restaurant's end. Most restaurants operate on margins slimmer than that, meaning Uber Eats' cut could leave them barely breaking even or losing money on each delivery. Some of the owners and managers the Journal spoke to said they trimmed which items were listed on the app accordingly, but none said they were comfortable hiking the cost to customers.

The Diver bags 18 to 25 Uber Eats meals a week. "In theory, per week, it's an extra $400 in sales but with the cut off the top ... it's not a huge amount," Stoops says. "It's been more of an aggravation." He and another restaurant owner have talked about pitching in to retain a shared delivery driver for Henderson Center businesses, but, so far, it's only talk.

Bonnie DeBord of Mia Bella Cupcakes doesn't make enough via Uber Eats for it to pay off. "The reason I did it," says DeBord, "is because no one around here does delivery and we have a lot of parents of HSU students who want to send cupcakes [for birthdays away from home]." While she tries to handle the deliveries herself, it's not always possible while baking and running the shop. "I just don't want people to be without an option." She says she doesn't advertise working with Uber Eats and was even hesitant to let Journal readers know about it since it takes such a chunk out of her bottom line.

Theresa Powell, manager at Stars Hamburgers in Arcata, says the local icon is considering dropping Uber Eats. While most of the canceled orders are reimbursed, Powell says some aren't. The kitchen, she says, turns around orders as soon as they come in over the Uber Eats tablet instead of waiting for a driver to be confirmed, since keeping a customer or a driver waiting can lead to a bad rating. If the order is canceled too quickly or before it's matched with a driver, it may not be automatically reimbursed. "Why wouldn't you match it with a driver before you send it to me to make the order?" she asks. She says she has emailed customer service to try to fix the problem but has received a standard response letting her know canceled meals will be reimbursed. Powell isn't fond of the food waste inherent in the system, either. "Even though they pay for the food, we're not really in the business of making food to throw it away."

If Stars Hamburgers leaves Uber Eats on the curb, Powell doubts it will have much impact on the 20-year-old business. "It may just be that we're kind of an old school restaurant," she says. "We still hand write tickets, we still make milkshakes by hand. It's part of the nostalgia." Most of the advertising the restaurant does is via community sponsorships, she says, adding that it doesn't need to raise its profile with Uber Eats.

Just down the street, Amy Wolfe of Wolf Dawg Eatery has found Uber Eats to be a boon, moving plenty of hot dogs and mac and cheese orders out the door to new and old customers. (She's hoping to keep the trend going when the restaurant transforms into The Choppery, shifting to a "fresh, healthy menu — no beef or pork," nixing the dogs and selling veggie burgers, chicken and fish instead.) "It's been great," she says, adding that over the span of a month and a half, only a handful of orders have sat without drivers and reimbursement for those meals has gone smoothly so far. She also says the 30 percent fee has paid off in new business. Wolfe looks at it like an advertising expense, including the $350 she shelled out for the tablet and photography to appear on the app. "I've had a new customer base just from dealing with them." She gets between one and five orders a day and reports that customers seem happy and "the support team is pretty good." Her only complaint, she says, is "I know how much better food is when it's hot," and only some drivers show up with insulated bags.

Wolf Dawg is also using DoorDash, another delivery newcomer to the county. It charges a monthly fee for equipment (a tablet and optional printer for less than $20) and a slimmer 25 percent of delivery sales. Wolfe was an early adopter and feels the service's direct deposit makes for a streamlined process. "I don't know if it's 25 percent of my income nice," she says.

A few restaurant owners the Journal contacted were surprised to have DoorDash drivers show up with company credit cards to pick up deliveries, given that their businesses hadn't signed on with the service. With a fee and tip going to the driver, and no charge to the restaurant, DoorDash's profit was a bit of a mystery. Powell says she noticed DoorDash orders, too, before a representative called to say its free trial period was over and offer a pitch for becoming a partner. That pitch included the total DoorDash sales recorded at the restaurant and information on the benefits accompanying that 25 percent fee. No such thing as free delivery after all.