Dock of the Bay 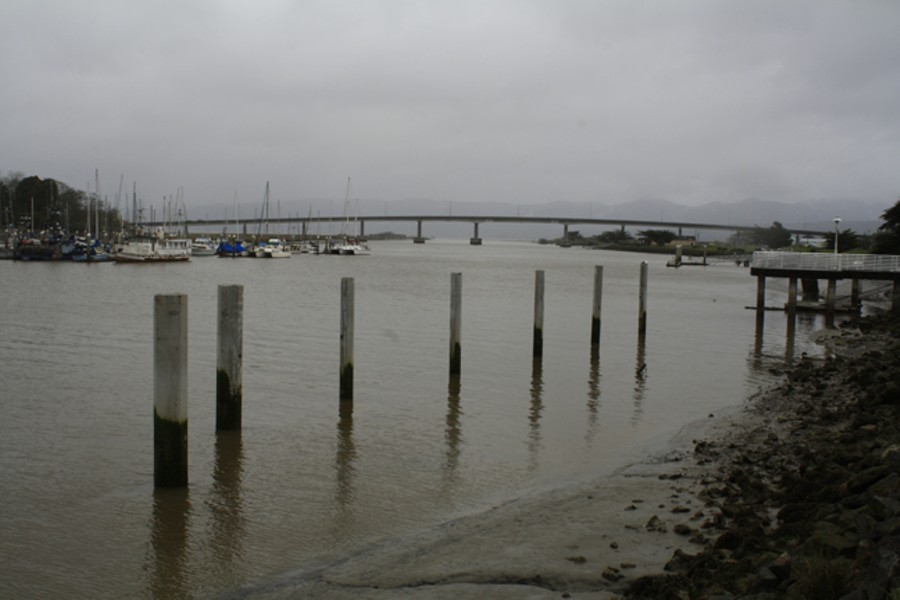 Photo by Zach St. George Concrete piles in front of the Humboldt Bay Aquatic Center. The piles were driven in October, but delays and redesigns mean the dock won't be done until at mid-May.

A white gull, heedless of the rain, slept atop the last in a row of gray concrete columns that jut from the water in front of Eureka’s Humboldt Bay Aquatic Center. The green algae rings where the columns meet the bay falsely suggest advanced age, bringing to mind the dilapidated wooden pilings scattered throughout Humboldt Bay. These columns, however, are mere months old. They are part of a new dock that will be the new home to the HSU women’s crew team and other Humboldt State aquatic education programs.

All that’s missing from the dock is the deck, which is on its way in bits and pieces from Sacramento, Seattle and Canada. The project is scheduled to be done by mid-May, or rather, it is re-scheduled. It was originally supposed to be done by January but construction trouble and redesigns pushed the completion date back.

“I’ll believe it when I see it,” said HSU women’s crew coach Robin Meiggs of the new dock. “We were told the original deadline was on Dec. 15.” She’s not holding her breath on the new deadline. “Until the dock’s in the water, we’re not making any plans,” said Meiggs. The women’s team is hoping for a permanent home in the Aquatic Center after decades of short stays in multiple locations.

When Meiggs joined the women’s crew team as an undergraduate in the fall of 1987, the rowers were based at the foot of L Street in Eureka. From there they moved into a three-walled shed at the foot of Washington Street, an area that Meiggs said had the reputation as a sort of red-light district. They cleaned it up and added another wall before moving again, this time to the foot of C Street, where they stayed for a few years. After that they moved to the foot of D Street, next to the Adorni Center. They moved again, to their current location, after the City of Eureka built a new boathouse a few hundred feet west of the Woodley Island Bridge. The HSU women’s team shares the boathouse with the flourishing Humboldt Bay Rowing Association and the HSU men’s team.

That building, about 50 feet wide by 75 feet long, is, in a word, cramped. Long, skinny boats stacked four-high stretch from one end of the room to the other. Smaller boats hang from the rafters, and aluminum outboard skiffs occupy the narrow walkways between the boat racks.

“We’ll be glad for the extra space,” said Humboldt Bay Rowing Association instructor Jerry Simone of the women’s team’s planned relocation. “But that doesn’t mean we can’t wait for them to go. We’ll miss the women’s team.” Simone said, however, that having a home base at the Aquatic Center will be great for the team. “If you’re gonna give the basketball team a basketball court, and you give the football team a football stadium, the women should have a boathouse,” Simone said. “That’s what the Aquatic Center is all about.”

The Humboldt Bay Aquatic Center is run by Humboldt State’s Center Activities, which manages auxiliary education programs such as ground school for pilots, rock climbing classes and kayak tours. Center Activities’ water-related programs are based out of the Aquatic Center. It is the boating safety center on the North Coast and is supported by the California Department of Boating and Waterways (DBW).

DBW provided funding for both the Aquatic Center (completed in 2007) and the dock. Center Activities director Dave Nakamura said the dock project, which cost a little more than $1 million, appeared deceptively simple. “The piles and the gangway and the floats all needed to work together,” said Nakamura.

It was driving the piles that was the trouble, said Mark Benzinger, the project manager for Mercer-Fraser, the construction firm responsible for building the dock. “Pile driving was difficult due to buried obstructions,” said Benzinger. Those obstructions -- rocks, tree trunks or other debris -- can cause pilings to go out of plumb as they’re being driven. That would cause the finished floating dock to bind up against the columns as it ascends and descends with the tide.

The result was that the pile locations had to be moved slightly so that they could all be driven in a straight line. This meant tweaking the original plans to fit the actual driven pile locations, which in turn meant going back to the drawing board with new specifications for the dock, and new permitting.

“Do I think anybody is dragging their feet?” Coach Meiggs asked rhetorically. “No, I don’t.” The permitting, the planning, the debating and the delays all added up to a long process, which she said seems to just be part of the construction routine. “It started about a gazillion years ago,” Meiggs added about the project, though Nakamura maintained the project is only four or five years old.

Meiggs and the women on her team get up at 5 a.m. six days a week and drive to the Humboldt Bay Rowing Association boathouse to get in a practice before school. “You have to say things go in full circles,” said Meiggs. The new Aquatic Center is only a couple minutes’ walk from the HBRA boathouse and is in almost the exact same spot as the team’s old location on the waterfront at the foot of L Street. “That’s right about where we started.”

With only eight weeks left in the school year, Meiggs said, “We imagine we’ll finish our season exactly where we are. Maybe we’ll get lucky and be [at the Aquatic Center] in the fall.”