Does My BMI Make Me Look Fat? 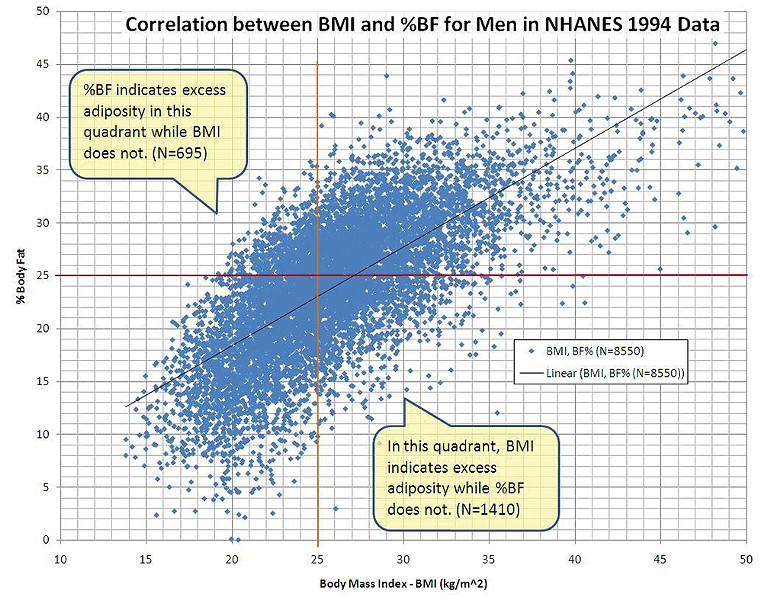 Image via Creative Commons Comparing body mass index (BMI) and percent body fat ("%BF") in a 1994 study of 8,550 men. See the upper left and lower right quadrants for the limitations of BMI in assessing body fat.

OMG! My BMI (body mass index) just jumped from under 24, where it's been for years, to more than 24. It's only a matter of time before it tops 25, meaning, according to the World Health Organization, I'll be overweight. Not obese — that doesn't happen until it reaches 30. What happened? My weight didn't change; it's still around 150 pounds, give or take. Turns out, I have a height problem. Like most old geezers, I've lost an inch somewhere along life's winding road. My previously dashing 5-foot, 7-inch frame had me at 23.5 BMI; now my puny 5 feet, 6 inches rats me out at 24.2. But enough about me. You can find a slew of BMI calculators online or do it yourself: BMI = 703 times pounds divided by inches-squared.

You might be wondering (1) Where does that 703 come from? (2) Why divide by the square of your height when you're a three-dimensional creature? (3) What's with those pat rounded cut-off numbers like 25 and 30?

BMI is measured in kilograms/meters-squared and the 703 converts from pounds/inches-squared. Thank Belgian statistician Adolphe Quetelet (1796-1874), who devised the measure as a rough-and-ready way to assess the average health of a population. The term "BMI" was first used in 1972.

If we're going to adopt such a simplistic way of gauging ourselves, we should use, not height^2 but height^2.5 — that's the average you'd find if you plotted weight against height for a large population. (Height-squared is just a holdover from earlier pre-calculator days.) The problem is that the "703 pounds divided by inches-square" formula makes tall people believe they're fatter than they are, while short folks think they're thinner. Also, no allowance is made for lean muscle tissue being about 20 percent denser than fat, so a 6-foot, 200-pound Olympic jock has the same BMI (26) as a sedentary, adipose-challenged couch potato with the same height and weight.

So while the NIH still says "a good way to decide if your weight is healthy for your height is to figure out your BMI," other medical authorities disparage its use as far too arbitrary. For instance, a 2016 study comparing BMI with cardiometabolic measures concluded that 75 million of us were healthy despite having "overweight" or "obese" BMIs, while another 21 million "normal BMI" folks were unhealthy.

Many researchers now believe that a better way to gauge general health is to skip weight entirely and focus on body shape — that is, waist-to-height ratio. According to the former director of the British Nutrition Foundation, "Keeping your waist circumference to less than half your height can help increase life expectancy for every person in the world." That's because your BMI ignores the distribution of body fat, since excess abdominal (i.e. waist) fat adversely affects your kidneys, heart, liver and other critical organs. For proof, consider a recent RAND Corporation study which concluded that the single factor explaining higher rates of type 2 diabetes in the US (5.0 percent) compared to the UK (2.7 percent) was the greater amount of mid-section fat on this side of the Atlantic.

Bottom line: If you're still using BMI as an indicator of your overall health, you might want to reconsider.

Barry Evans (barryevans9@yahoo) figures out all he has to do is grow a couple of inches in height to be healthy again.