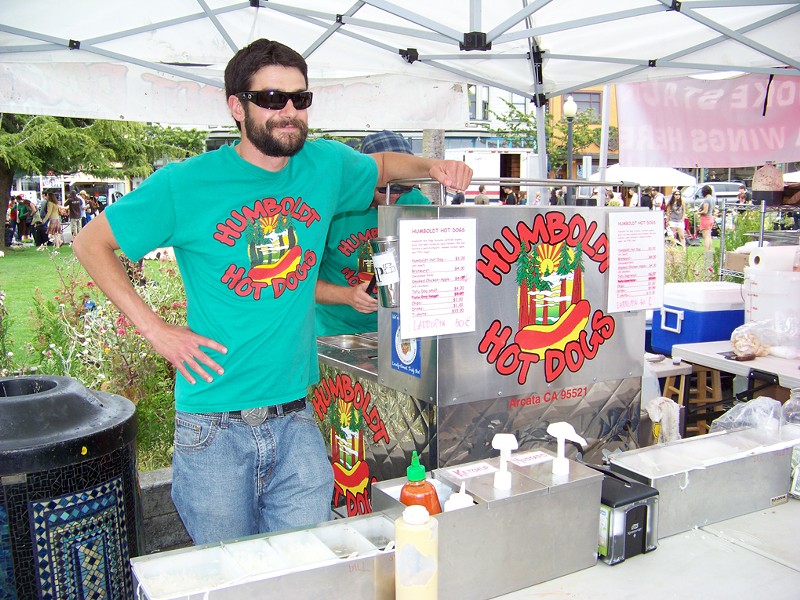 Folks, we have a hot-dog standoff happening right now, right down here on the flower-besotted, layabout-dotted Arcata Plaza, where the statue of Prez McKinley generally rules as the more constant source of rankle. Yes, hot dogs -- but no fear, some are tofu! And organic! Relax, troglodytes -- some are regular, too. The battle is not over the dogs' Arcatan correctness, nor over their promoted benefits or non-benefits to the local digestive system. It is a war of ideals -- a contest, say, to see if it is enough to be a nice guy of the gentleman's-agreement persuasion, or if one must engage in the emotion-free, dot-the-i's-and-cross-the-t's sort of behavior. A war -- OK, it's really just a major miff-off -- between entrepreneurs, both affable guys actually, of rather different intensities.

On our left (if we're facing bar-row), sitting on a plaza bench this hazy, bright midday Thursday with his cell-phone handy, we have laid-back, softspoken 30-something Jon Quaccia, owner of Humboldt Hot Dogs. In the spring-to-autumn seasons of 2009 and 2010, Quaccia ran his hot-dog cart on the plaza -- organic beef and smoked-chicken apple sausages, five varieties of tofu dogs, Blue Sky sodas. The disillusioned former labor organizer and one-time social worker started the new gig off in a spot in the center, near McKinley, working just days. By mid-2010 he was in another spot, by the flag pole, on the north edge of the plaza, and was working strictly Thursday, Friday and Saturday nights there (plus day gigs at the Arcata Farmers' Market on Saturdays and at numerous festivals, which he still does). Quaccia had convinced city officials to extend plaza vending hours past dusk to 1:30 a.m., and his flag pole site turned into a real financial sweet spot. It is but a quick stumble from the rank of bars just across the road, and any cart positioned there is guaranteed a swarm of peckish barflies at closing time.

On our right, setting up his cart this very moment on that sweet spot with the help of two employees, we have Owen Newman, owner of O'Dog's. Newman, a sweet-faced, flash young business major from Humboldt State University who was one of four grand-prize winners in this year's Economic Fuel competition, began operating his hot dog cart here in March -- nothing organic, just good ol' turkey dogs and Polish sausages, tofu dogs and hot links.  His pitch to the economic fuel folks included plans to expand O'Dog's to at least six carts, to be rolled out across the county.

Newman is a 6'9", 300-pound former college basketball player, who also worked security for some of the plaza-side bars. Quaccia is slender, with a short, dark beard, often seen in his kelly green Humboldt Hot Dogs T-shirt.

Their beef? Well, Newman says he really doesn't have one; he's just doing business. Quaccia, however, accuses Newman of picking his brains then grabbing his spot, and he blames the city for letting him do it. Even more, he says, he's worried that his public image has become muddled.

"I'm not trying to bad mouth anyone," Quaccia said. "But there is a heckuva lot of confusion about who is who now. I went to sign up for the Humboldt County Fair in Ferndale, and they said, ‘You've already signed up.' But it was the other guy, Owen. But he didn't get back to them in time with a check, so I swooped in and got her a check and I got in. ... So many people have been coming up to me, at festivals and the farmers' market, and asking me, ‘Where are you? Why aren't you on the plaza?' And now he's becoming the Arcata hot dog guy."

A couple of years ago, Newman had come to Quaccia to ask him about the hot dog vending business.  "He said, ‘I'm thinking about starting a hot dog cart in Eureka next year,'" recalls Quaccia. "He said, ‘I heard you've been doing good here, can I interview you?' I don't know how to be anything but nice, so I told him everything I knew. He said he wasn't going to do organic, but I told him he should do tofu dogs because it looks good to have them. And I gave him my phone number, in case he wanted to talk shop. "

Newman remembers it a little differently. He was taking a business class designed to prepare students to enter the Economic Fuel Competition. He interviewed Quaccia and a couple of other food cart vendors on or near the plaza as part of his studies.

Quaccia, meanwhile, went about his business as usual.

Last November, as he had done the year before, Quaccia packed up his cart for the winter. He left town, planning to be gone through February. He didn't tell the city his plans. He didn't apply and pay rent to keep the spot another three months -- the city rents the three vendor spots on the plaza in three-month increments, and current vendors pay permit, insurance and health department fees as well as a per-day rental fee (currently $17 a day). Quaccia says it didn't occur to him that somebody else would want his spot.

In March, a friend called him to report that O'Dog's was in his spot.

Newman says that happened partly because he couldn't find a hot dog when he wanted one. "When I came out in the daytime a couple of times, he wasn't there," Newman says. "He wasn't consistent. That was a turning point for me." When he saw that the flag pole site had sat empty for several months, he decided to move in.

He says he's grateful to Quaccia.

"He's part of the reason I was able to do this, because he gave me a lot of good information and was really helpful," says Newman.

When Quaccia got back to town this spring he confronted Newman. "He said to me, ‘You dropped the ball,'" says Quaccia. "And I admit, I did kind of drop the ball. But there wasn't any question that he knew what he was doing. I was real hurt."

Quaccia says he called the city and asked why they hadn't warned him someone wanted his spot, and the city folks said they hadn't heard from him so they gave Newman the site when he applied for it. It wasn't, they said, their place to protect or promote one vendor over another.

"I would have gladly paid for the down months had I known that might happen," Quaccia says.

He was further peeved when Newman made him an offer: Quaccia could give him $6,000 -- the low end of what Newman figured he could make in three months on the flag pole spot -- and Newman would agree to never set up a hot dog cart on the plaza as long as Quaccia had plans to. Quaccia declined, he says, on principle.

Newman says he felt no obligation to call Quaccia before he applied for the permit for the flag pole site earlier this year.

"It's not very businesslike to call an opposing company and ask, ‘Are you going to take this spot?'" he says. "Because, of course, he'll go take it."

If you want to run a successful business, Newman adds, you've got to stay on top of your stuff.

"I understand Jon's upset," he says. "But this is a legitimate transaction. If he wanted this spot, he should have paid for the down months. It was open for three months -- anyone could have applied for it."

Newman admits to the offer he made to Quaccia.

"I'm a businessman," he says. "I thought I could potentially double my money -- make an easy $6,000 and go set up on another spot, maybe on the backside of the Plaza, behind Toby & Jack's [bar]."

Despite their disagreement on how things should have transpired, both men have agreed to be friendly and not talk down each other's products. Meanwhile, because of the tussle, the city has amended the rules. Now, on any of the three plaza vendor spots, a vendor can apply for a 90-day permit up to four times in a row (a year total). After that, the spot has to be left open for a new entrepreneur to step in, if there is one.