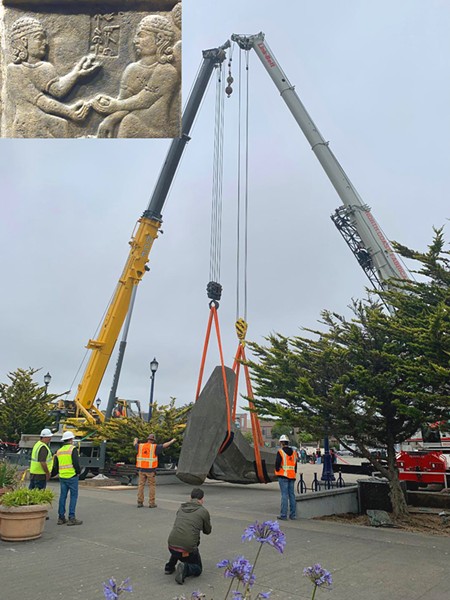 The "jacks" design of dolosse — H-shape with one leg turned 90 degrees — causes them to lock together more tightly under heavy wave action. On the morning of Aug. 15, local contractors moved dolos No. 1972 from Broadway to Madaket Plaza.

Photo by Dosseman, via Creative Commons

I bet you played jacks as a kid. I spent much of my youth trying to perfect my game of fivestones, as it's called in the U.K., a game about as old as civilization. (See the inset photo, a 3,000-year-old carving from Carchemish in modern-day Syria, in which a couple of kids are shown with "knucklebones.") That's the generic name, since the original jacks were made from the astragalus bone in a sheep's hock, or ankle. If you squint, can see the visual connection between a toy jack and the newly arrived concrete thingy in Madaket Plaza.

In 1963 in South Africa, harbor engineer Eric Merrifield and his draftsman Aubrey Kruger were trying to solve an erosion problem. The main breakwater of the East London harbor at the time consisted of 40-ton concrete slabs, many of which had shifted during a major storm. The pair came up with the idea of an anchor-shape that, rather than simply blocking the energy of waves, would dissipate the energy, deflecting it to the side. Better yet, a seawall built of dolosse (the Afrikaans plural for dolos, meaning ox knucklebone) is both interlocking but porous, and somewhat flexible, so heavy waves will cause them to get further entangled. In subsequent trials in South Africa, unreinforced concrete 20-ton dolosse held better than 40-ton reinforced concrete slabs. Merrifield said later that they wanted "to design a block that did not break up or shift when struck by the sea; that was cheap; did not require precise placement; [and that could be] sprinkled like children's jacks." In East London, they found about 10,000 dolosse were needed per kilometer of coastline.

Fifty years ago, the U.S. Army Corps of Engineers, facing a similar problem with the notoriously unstable entrance to Humboldt Bay, made the decision to try the same solution, even though it hadn't been previously employed in the U.S. (Merrifield and Kruger had chosen not to patent their invention, so the design was freely available.) In 1972, the Corps placed an order with the Umpqua River Navigation Co. for nearly 5,000 42-ton dolosse. Within months, all the blocks had been placed in two layers on our north and south jetties, where they still protect the harbor entrance from Pacific storms. All, that is, except No. 1972 (to match the year), which was donated to the Eureka Chamber of Commerce, where it sat, in the chamber parking lot on Broadway, for 50 years.

Until Aug. 15. Despite an earlier plan to demolish it to make way for a hotel on the site, local contractors — notably Kernan Construction, North Coast Fabricators and Zerlang Marine Services — pitched in and moved dolos No. 1972 to its new, permanent resting place on Madaket Plaza. Starting at 6 a.m., it was all over four hours later. You can now go and appreciate what, to an engineer's eyes, is a thing of beauty and a tribute, per the original plaque, "To the seafaring men [sic] of Humboldt — past, present and future."