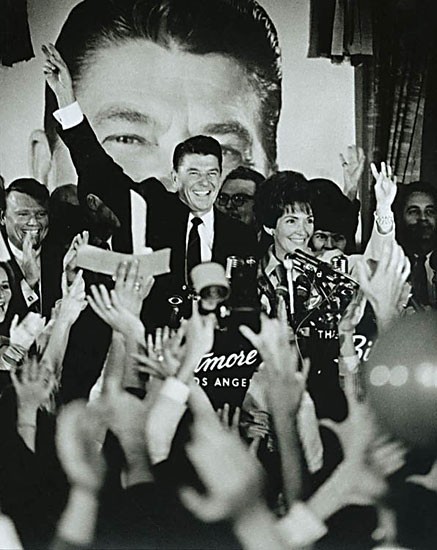 We can all agree that California is a fiscal mess. As I have traveled around the country over the past few months, people I talk with seem to essentially view our state with a sense of pity. They ask, "What are you guys going to do out there?"

The fact that this state, with all its natural beauty, delightful climate and creative population, has gotten itself into such dire straits raises the obvious question -- why? How, exactly, did this come to pass?

Two Bay Guardian journalists, Steven Jones and Tim Redmond, present the rather implausible hypothesis that the true sources of our problems are rooted in the long-ago administration of Ronald Reagan and the free market philosophy that he espoused. More specifically, they blame the 1978 passage of Proposition 13, which limited property tax increases in the state. Attributing our problems to Prop 13 is an argument I've seen presented many times over the past few years.

Jones and Redmond assert that "opposition to taxes is now deeply embedded in the California electorate." Their lament, essentially, is that we are in this predicament because taxes aren't high enough. Granted, primarily because of Prop 13, California's property tax rate is below the national average. That, however, is only part of the picture.

California has the highest state income tax rates and the highest sales tax rates in the nation. We are first out of 50 in those rather dubious achievements. (Our top income tax rate, 10.55 percent, is almost twice the average of the other 49 states.) I shudder to think how high our tax rates would be if the electorate were not under the spells of Ronald Reagan, Howard Jarvis (described by the authors as "a Republican landlord lobbyist") and Milton Friedman. In spite of Prop 13, state government expenditures have increased more than 7 percent per year since its passage.

Jones and Redmond seem to believe that advocacy of free market economics and opposition to government growth started in California 40 years ago. They also believe that California is such a trendsetter that the philosophy contaminated the rest of the country, and the whole world as well.

Argument for the benefits of free market economics has been around for well over 200 years and was first elaborated by a Scotsman, Adam Smith, with the publication of "The Wealth of Nations" in 1776. The most famous tax revolt, the Boston Tea Party, occurred in 1773.

It apparently doesn't occur to the authors that the kinds of liberal and progressive policies they advocate might have played in California's decline. Because they refuse to look inward or take any accountability, they can only conjure up strained explanations as to why someone else must be to blame. All the state's problems are caused by the ghosts of three dead white guys (Reagan, Jarvis and Friedman).

California's fundamental problem is its anemic economic growth rate. Our state has the fourth highest unemployment rate (12.2 percent) and the second highest home foreclosure rate. Is California in such relatively bad shape because its citizens are not taxed enough? That doesn't make sense.

The opposite is much closer to the truth. Because of high taxes and irrationally burdensome regulations, California is near the top of the list in regard to hostility toward business. According to a ranking by the Small Business and Entrepreneurship Council, only New Jersey has a more business-unfriendly environment. Californians can, if they choose, burden businesses with ever more demands and regulations. They pay a high price, however. Choices have consequences. Intel Corporation, the chip manufacturer that started in California, announced earlier this year that it would be investing $7 billion in new manufacturing facilities over the next two years -- in Oregon, Arizona and New Mexico. There's a pattern there. Are they avoiding California because our taxes are too low?

Jones and Redmond recognize the negative effects of the kinds of policies they espouse. "Certainly, turning over more public resources to free market capitalists, cutting taxes and slashing government regulation will spur private sector economic growth, just as advocates claim. But that growth has a cost. The wealth won't be shared by everyone." Their argument essentially says there's no point in creating wealth if it's not equally distributed.

In other words, if the beneficial impacts of some policy are not equally shared by everyone, they must be rejected. Such a standard creates an absolutely impossible hurdle for any human action. For Redmond and Jones, income equality is more important than economic growth. I have never understood those kinds of priorities. The damage done by unemployment is a real and unrecoverable loss. Ironically, it also hurts government revenues and, in the end, those citizens who depend on government-funded programs. If Redmond and Jones really want more money flowing into state coffers they should be welcoming policies that encourage economic vitality.

Jones and Redmond regret that corporations don't pay as much taxes as they should, partly because of Prop 13. The fantasy that corporations are capable of paying taxes is one of the most naïve beliefs of the left. In the real world, the world all of us actually live in, only humans are capable of paying taxes. Corporations are only intermediaries. They can write the checks to the IRS or the Franchise Tax Board, but they can't bear the "burden" of taxes any more than cows or real estate can.

Corporations connect with humans in three ways -- owners, employees and customers. The burden of corporate taxes falls on some combination of those three groups. Corporate taxes result in some combination of reduced profits for shareholders, higher prices for customers and lower wages for employees. The actual distribution of the effects varies from industry to industry, case to case. The conclusion of most recent research indicates that the principal burden falls on the employees of corporations. If your objective is to soak the rich, the corporate tax is an extremely crude and counterproductive means for doing so. Many on the left despise corporations and have no interest in actually analyzing their policies, so the corporate tax is one of their favorite weapons of choice.

California will survive and we will muddle through somehow. Unfortunately, we are squandering our vast potential by misreading the fundamental sources of our chronic problems.