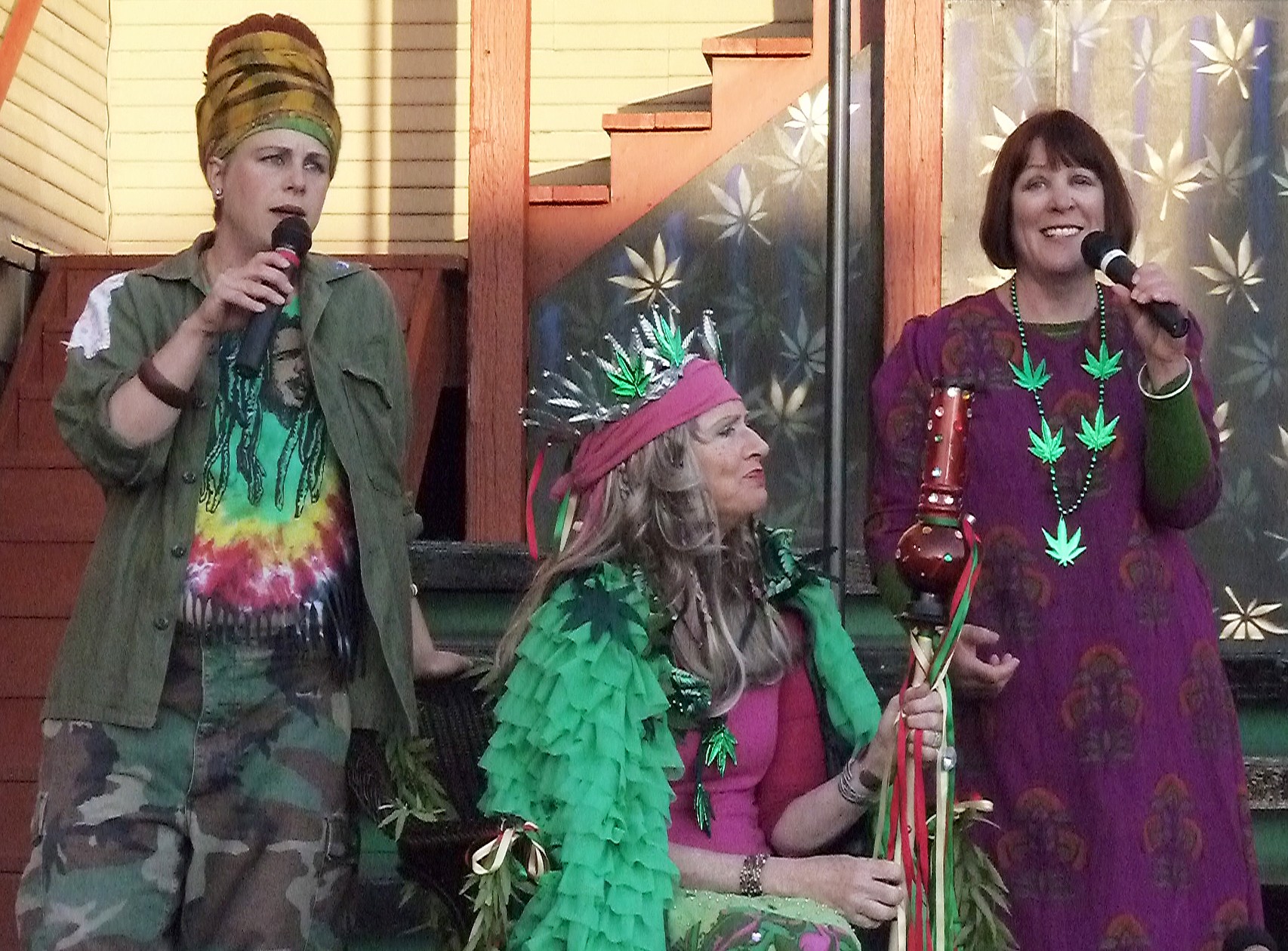 "Mary Jane: The Musical was the biggest grossing show in a single run we've ever done," said Producing Artistic Director Michael Fields. "And some people still didn't get to see it." So that's one impetus for reprising it this coming summer, as is an unusual circumstance for such a large cast. "Everybody who was in the show last year is available to come back," Fields said. "Even our graduate students. It's never happened before."

But there are a couple of other compelling reasons. First and foremost is the community's deep interest in the topic, the Humboldt marijuana industry, which was recently estimated as generating an astonishing one billion dollars for the county economy.

The second reason is artistic. "Last summer we were just trying to get material on stage that allowed people to think about it," Fields said. "Now we can develop it more, deepen it, especially the characters and relationships."

Dell'Arte's artists can deepen the story, but they decided to seek help in broadening it. They've posted last year's script online, and are asking anyone with an idea, a suggestion or even a song to email them. These contributions are posted at the end of the script, and taken into consideration as the revised show is being developed.

The contributions received so far have included song lyrics and even music in Mp3 files and a CD. "We're trying to make a bigger conversation with the community," Fields said. "We really want people to write stuff down, so we can get a broader perspective."

For example, several contributions posted so far suggest portraying the trimmers. Someone noted that Mary Jane mentions her son, but he's never seen. Why not more about him?

Fields noted that when Joan Schirle (as Mary Jane) sang Joani Rose's song "My Son" for the production's visit to the Hempfest in Garberville in November, "people were weeping," particularly in response to such lyrics as "He was by my side, the very first time I put a seed in the ground." So this suggestion is likely to result in an addition to this summer's version.

Additions also mean there will be some subtractions. "We know we're keeping the key songs," Fields said, like Tim Randles' "Why is Whiskey Legal and Pot is Not?" and Scott Menzies' "The Industry." And though there will be some topical updates to 2012, it will all still be set at the Emerald Ball. What's different will depend in part on what suggestions are received. "We're also doing this show for three weeks instead of two," Fields revealed.

So to participate in creating this show, you can start at www.dellarte.com/maryjane, which will link you to the script and the suggestions posted so far. You can also contribute directly by emailing info@dellarte.com.

Opening last weekend and continuing until March 26 is the 10th annual spring production at College of the Redwoods, a reprise of the play that started the series, Moliere's comedy The Miser. It reunites the original creative team of Kjeld Lyth (director), Daniel Lawrence (scenic design) and Denise Ryles (hair and makeup). It's onstage at CR's Forum Theater Thursdays through Saturdays at 8 p.m., and Sundays at 2. Tickets at CR Bookstore or at the door.

Ferndale Repertory Theatre presents a limited run, North Coast premiere of the musical [title of show.] Yes, that's the title of the show: It's about two struggling young artists assembling a show for a musical theatre competition. Written by Jeff Bowen (music and lyrics) and Hunter Bell (book), it had a 100-performance Broadway run in 2008. The Ferndale production features Philip De Roulet, Craig Waldvogel, Elena Tessler, Jo Kuzelka and Laura Welch. It runs just two nights, but on successive weekends: this Friday (March 16), and next Friday (March 23) at 8 p.m. Rated PG-13. (800) 838-3006, www.ferndale-rep.org.

This weekend Dell'Arte International's first years present the results of their immersion in melodrama (in class at least) called Saved At Last From the Awful Flood of Life. Seven pieces seek to exemplify the struggle pitting loyalty, honor and justice against deceit, greed and intolerance -- and the good guys win!

There's an opening night benefit for International Student Aid on Thursday at 8 p.m., with tickets at $25. Friday and Saturday shows are pay-what-you-can. (707) 668-5663 or www.dellarte.com.

On Friday (March 16) the Arcata Playhouse starts its sixth annual Family Fun series with Japanese storyteller Kuniko Yamamoto in Magic Mask, Mime and Music of Japan at 7 p.m., with Saturday shows at 2 p.m. and 7. Future family-friendly shows in the series bring Faustwork Mask Theater in April and San Francisco's Sweet Can Circus in May. Tickets can be purchased at Bubbles, Wildberries Marketplace and Redwood Yogurt in Arcata, or online through brownpapertickets.com. More information: (707) 826-1575, arcataplayhouse.org.

For your long-range planning, North Coast Repertory Theatre opens Shakespeare's comedy Much Ado About Nothing on March 29.