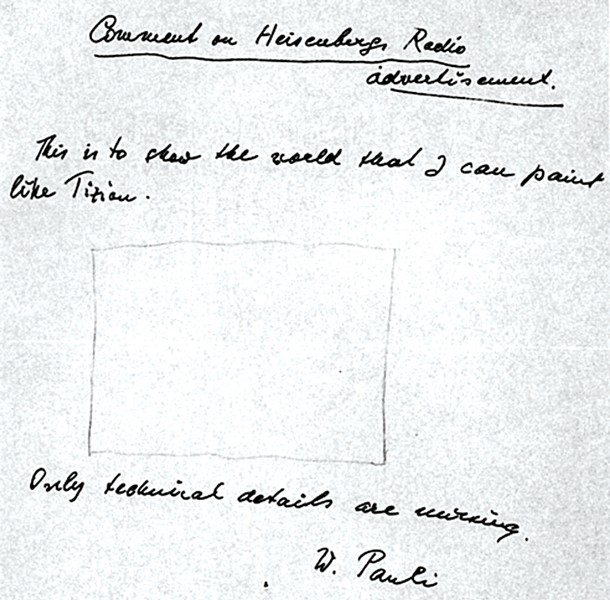 Image by CERN Wolfgang Pauli's 1958 "empty rectangle" message to physicist Robert Oppenheimer: "This is to show the world that I can paint like Titian. Only technical details are missing."

Today, hundreds, if not thousands, of theoretical physicists the world over are trying to find the holy grail of physics, a "theory of everything" (or TOE for short) that explains and links together all physical aspects of the universe. More concretely, a successful TOE would connect the two theories on which all physics depends: general relativity and quantum mechanics.

This isn't a new quest. In 1958, two giants of fundamental physics, Wolfgang Pauli and Werner Heisenberg, thought they were on the right track. So much so that Heisenberg claimed in a radio talk to have figured out the TOE, adding, "only technical details are missing." When Pauli heard about this, he was incensed, writing identical messages to several fellow physicists: "This is to show the world that I can paint like Titian. Only technical details are missing." He illustrated his artistic skill with an empty rectangle. How ironic that Heisenberg, who probably did as much to figure out the underlying mechanics of the world around us as anyone, and who was awarded the 1932 Nobel Prize for Physics "for the creation of quantum mechanics," should be remembered most for this mocking commentary.

The revolution in quantum mechanics began in 1900 with Max Plank's "quantum" postulate: Electromagnetic energy can only be emitted in quantized form, that is, the energy comes in multiples of elementary units. This is at odds with classical physics. Later, working in the early 1920s with Max Born and Pascual Jordan, Heisenberg developed the basic formulation of quantum mechanics. Published in 1925, it's still used today. Two years later, he figured out what's known as the "Heisenberg Uncertainty Principle," which says that there's a limit to the accuracy with which the properties of elementary particles can be known. For instance, if you know exactly the position of an electron, you are clueless about its velocity — and vice versa. Or you can kinda-sorta know where it is, in which case you kinda-sorta know its velocity (or more properly, its momentum).

Back to Heisenberg. He died of kidney cancer at age 74 but he came close to being assassinated 32 years earlier by Moe Berg, former Major League catcher and coach. It's literally the stuff of movies: See The Catcher Was a Spy (2018), in which Berg is played by Paul Rudd. During WW2, General Leslie Groves, military head of the atomic bomb "Manhattan Project," became convinced — falsely, as it turned out — that Germany was in a race with the U.S. to develop an atomic bomb, with Heisenberg leading the effort. In 1944, Heisenberg gave a lecture in Switzerland, attended by Berg, who was then an agent of the OSS (forerunner of the CIA). Berg, who was carrying a pistol, had been ordered to kill Heisenberg if anything he said "convinced him the Germans were close to a bomb."

He didn't and so he didn't.

Barry Evans (he/him, barryevans9@yahoo.com) is working on his Pulitzer Prize. Just a couple of technical details to sort out.