Post-apocalypse and Mark Twain at the Playhouse 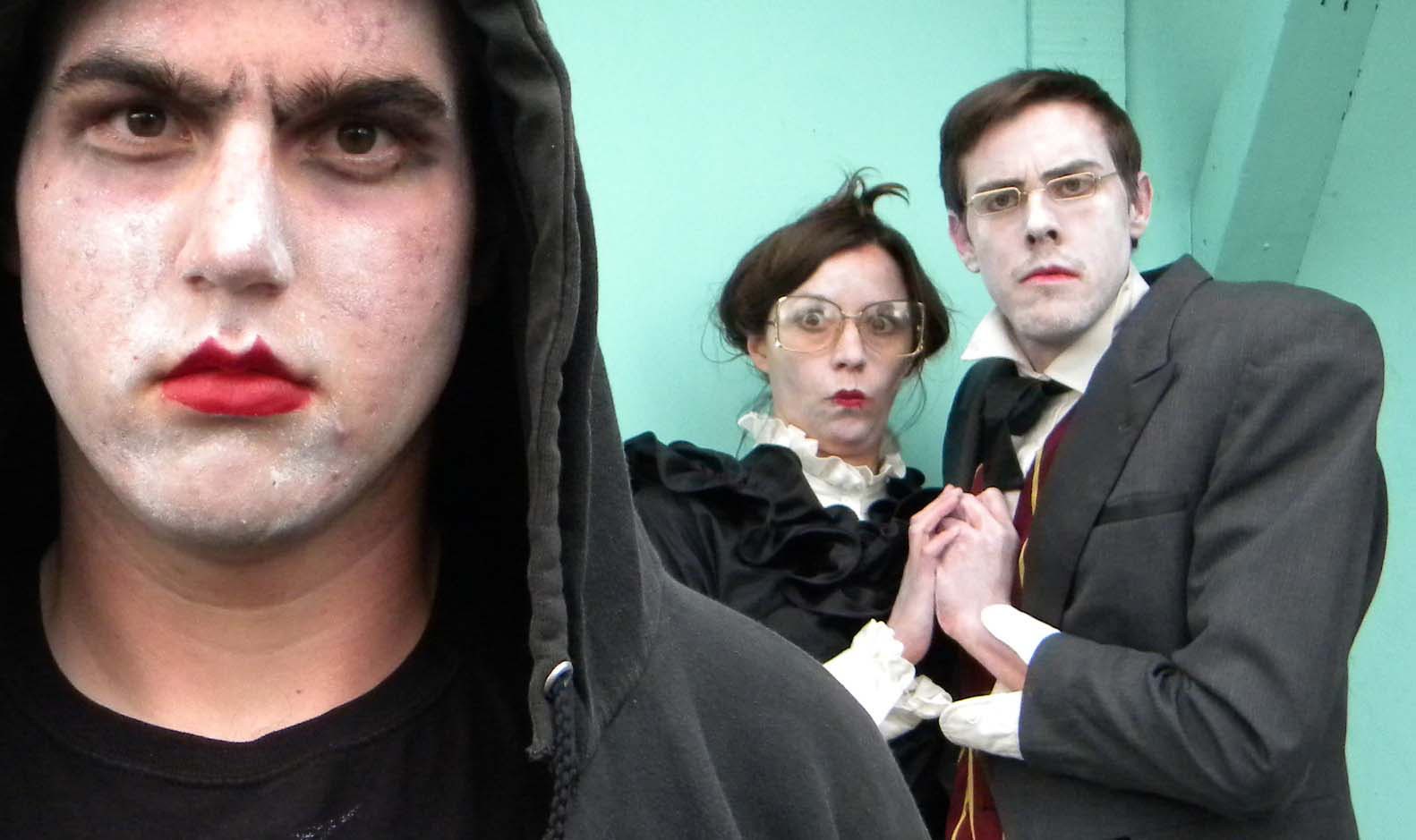 Pig Tree, a post-apocalyptic comedy in two acts, played last weekend at the Arcata Playhouse -- or rather, outside of it. Theatergoers were led from the Playhouse lobby into the cold night, to bleachers facing a set (a bench, steel desk and a few other pieces), in front of a few stylized bare trees and the cement wall of a real building.

It gradually emerged that the actors in tattered clothes (Sarah Peters and Adam Curvin) were playing former servants who remained at the aristocratic house they served, even after some unspecified apocalypse. Their employer ("the Laird") is missing, apparently along with almost everyone -- except for two thugs on bikes (Scott Simmons, Eric Puttre), a self-appointed boss called Potts (James Peck, also the playwright) and Pap (Ben Clifton), his minion with the convenient hunchback he beats.

All the actors performed admirably -- especially Peters and Curvin -- and the outdoor arena allowed for some effects less likely indoors, including tall shadows created by Michael Foster's lighting. But the setting, the style, the story screamed meanderingly of attempted Samuel Beckett, plus minor acrobatics. For me, a determined imitation of Waiting for Godot needed more than some poetic dialogue and a familiar rendering of power relationships to justify freezing for art. After the one hour first act, I joined the 20 or so hardy souls who returned for the remaining 45 minutes, but when Pozzo reappeared beating Lucky -- sorry, Potts beating Pep -- I headed for warmer pastures, perhaps missing the moral of the story.

I don't want to fall into the trap of praising the pleasing execution of basically lightweight fare like Glorious! or Man of La Mancha, while dwelling on perceived flaws of plays that attempt something different. In some ways, Pig Tree was textbook "theatre of the absurd," but audiences don't come from textbooks, and this needed to do more than illustrate the form. Though well-executed, for me this experiment raised more expectations than it met.

That partly had to do with the premise. Several plays done locally over the past few years involved doomsday, often as a starting point, including more than one at the Arcata Playhouse. Maybe there should be a festival of them -- "The Apocalypse Playhouse: Where the world ends, and the fun begins!" It has built-in drama, but I wonder if it's getting too easy.

Some 20th century literature saw, partly in the blasted landscapes of two World Wars, the evidence of civilization as frenzied wasteland, piling up its own doom. But there were also elements of the cautionary tale -- of warning -- that implied there was still time to prevent apocalypse.

These days, particularly in books about climate cataclysm I've been reviewing elsewhere in this journal, some kind of apocalyptic future is seen as probable, if not inevitable, and not that far away. People may deny it, but they feel it. It may not happen, but it seems to be gradually getting real. It is something people may have to make a life within. I think this raises the bar for apocalyptic stories on stage. Not that they can't employ humor, but we need them to say something new, something useful.

Mark Twain was born in Florida, Missouri in 1835. Cal Pritner, who pretends to be Mark Twain, was born exactly 100 years later in nearby Kansas City. In this centennial year of Twain's death, Pritner brought one of his one-Twain shows, Mark Twain: Traveling, to a sellout crowd at the Arcata Playhouse recently, for his third appearance there.

In addition to his work as an actor, Pritner has a distinguished career as a teacher, administrator and mentor to various theatre notables, such as our own Dell'Artisan, Michael Fields. Even with unfamiliar tales, this show fulfills expectations of Twain as a wry humorist and observer of the textures of earlier times. Pritner looks the part, and his mastery of Twain's diction and unique vocabulary eventually had the crowd audibly responding to his every sentence.

The Dell'Arte International School MFAs present their Thesis Festival over the next two weekends. There are four original works, all presented at each performance: an "investigation into the rhythm of tension and the nature of fear," a surrealistic comedy, a comic meta-operetta, and a day in the life of three eccentric clowns. Thursdays through Sundays in the Carlo: May 13-16 and May 20-23. The following weekend, May 27-29, Dell'Arte's first-year students present The Finals, another collection of short plays, again at the Carlo; all performances are at 8 p.m.

North Coast Rep opens the musical Gypsy on Thursday, May 20. Showtime at 8. The week after that, on May 27, Ferndale Rep is scheduled to open the comedy Same Time Next Year.