Will Arcata's historic recycling center be tossed out with the trash? 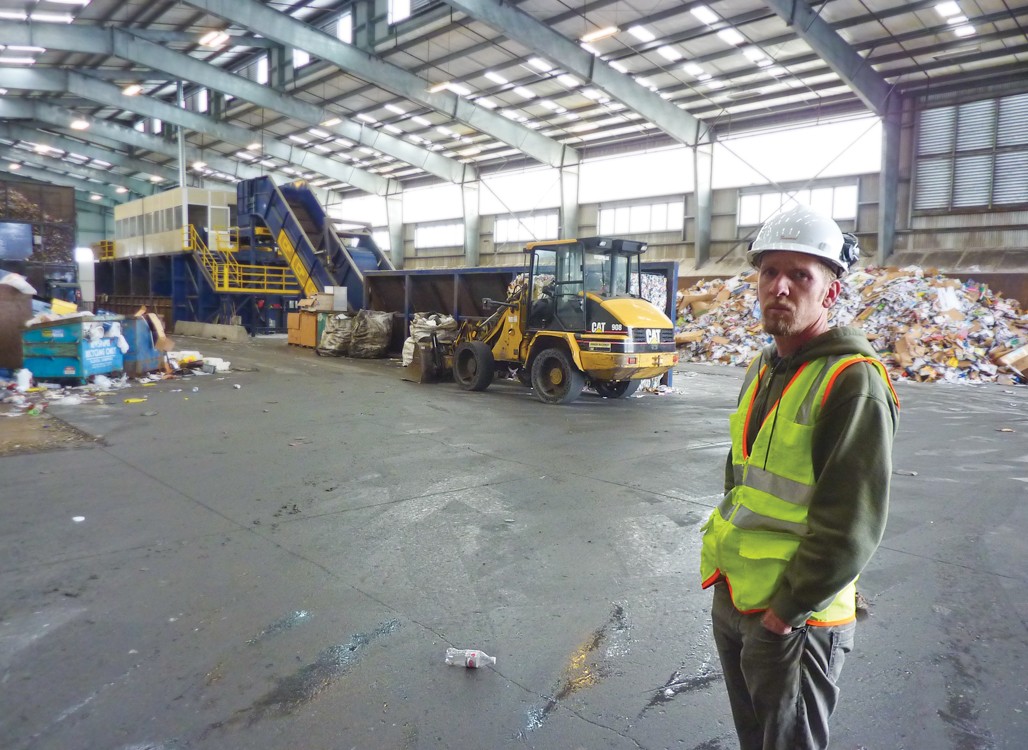 For now, work continues as usual at the Arcata Community Recycling Center (ACRC) facility in Samoa, but unemployment looms large in the minds of its 35 employees. Barring an unlikely reversal, a new deal will send Humboldt's bottles, cans, newsprint, and other recyclables rumbling down Hwy. 101 to Willits, taking those jobs along with them.

The board of the Humboldt Waste Management Authority (HWMA), which represents the county and most of its cities, calls the move frugal. Ratepayers, they say, will save $2.5 million over the course of a five-year contract with Solid Waste of Willits Inc. Opponents, however, argue that the deal is shortsighted and callously ignores the benefits of keeping locals employed. Despite these objections, the board is expected to finalize the deal with Willits at its April 14 meeting.

Here's how the future of Humboldt County's recyclables arrived at this crossroads: ACRC's $8 million processing facility on the Samoa peninsula was completed just four years ago. At the time building the plant seemed like a logical next step for the oldest nonprofit recycling center in the country (established in 1970), especially considering the steadily increasing stream of recyclables. But state-of-the-art technology, and the debt incurred to build it, proved more of a burden than a benefit once the recession hit. In late 2008, prices for recycled materials plummeted and ACRC nearly went under. It was only able to drag itself from the brink by charging a tipping fee -- $60 per ton of materials ("Redemption Value," June 17, 2010).

This fee prompted HWMA to shop around for alternatives. In July of last year the agency put out a request for proposals on a five-year contract. Only ACRC and Solid Waste of Willits responded, and the latter had a compelling offer: Rather than charging to take the recyclables, the company offered to buy them at $8 a ton, perhaps more once the commodities market improves. The company already had trucks driving up to Scotia with biofuel and returning to Willits empty. Why not fill them with recyclables?

Milt Boyd, a member of the ACRC board of directors, said that Solid Waste of Willits was able to offer the deal because it also handles trash, which isn't subject to the market fluctuations that affect recyclable commodities. When that market is bad, as it has been recently, garbage companies can subsidize recycling losses with garbage profits. ACRC, which is strictly a nonprofit recycling center, has its fortunes tied to the fickle commodities market.

Michele McKeegan, another ACRC board member, argues that the bidding process wasn't fair, that it undervalued the benefits of keeping the business local. Plus she said ACRC could have been flexible on price. "We said that we'd be willing to come down to $0, and possibly even buy the recyclables," she said. But the nonprofit's brush with bankruptcy made its board reluctant to name a fixed price for the duration of a five-year contract. "We suggested a different way of calculating the arrangement that would rise and fall with the market," McKeegan said.

After review, HWMA's board decided to pursue a contract with Solid Waste of Willits. The disparity in price, which works out to half a million dollars per year, was simply too much to ignore, said HWMA Executive Director Jim Test. He argues that the benefits of local employment only go so far. "We're not in the job-subsidy business," he said ruefully. "We're just looking at the garbage rates. This deal keeps $500,000 per year in the pockets of ratepayers. I think that helps more people."

That's cold comfort to ACRC Operations Director Mike Seeber. Like many of his co-workers, Seeber expects to lose his job when Solid Waste of Willits takes over HWMA's accounts. "When that goes we won't have the volume to keep the facility going," he said. "It'll get shuttered, essentially. The banks will foreclose."

He wants to find another job in Humboldt, but he said he isn't counting on it. "I will get in the unemployment line with everyone else and hope for the best."

Allison Poklemba runs ACRC's education program, which she said reaches at least 4,000 kids annually, with agency educators traveling to local classrooms and kids visiting the Samoa facility. If the deal with Solid Waste of Willits puts the program at risk, Poklemba said she'll try to keep it alive through grants, school funding and donations. "Ultimately we see ourselves as an education facility, and we'd like to keep that going."

Community advocates -- and ACRC has developed more than a few in its 40 years -- also worry about losing the agency's institutional knowledge and community ties, like the one with Arcata's Fire and Light, which manufactures glassware from bottles and jars provided by ACRC. (HWMA recently vowed to meet the company's needs.)

Expect those recycling advocates to show up Thursday night at the HWMA board meeting, which starts at 6:30 p.m. at Eureka City Hall, 531 K St. The public is welcome to attend.