Down to the Wire: Confronting Climate Collapse 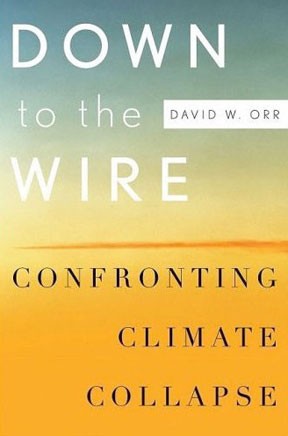 Because environmental studies professor David Orr's book is gracefully written, with a lucid and comprehensive vision, it is easy to read. However, because of its subject and its messages, it is very difficult to read. For all of those reasons, it is important that everyone reads it, because it is about our future, which is likely to be very different from the present.

Orr begins with a view of the future that close observers of climate change are increasingly coming to, one that marks a real difference from just a few years ago. Despite current denialist noise, it's not a question of "if" anymore. It's how fast, how bad and how long.

Continued greenhouse gas pollution will result in an unrecognizably hot planet for hundreds of thousands of years, shorn of the life we know. "But a sober reading of the science of climate change indicates something else: We have already set in motion forces and trends that threaten the stability of the biosphere in a few decades and that will persist far longer."

This is the growing consensus: Severe and long-lasting effects are already in the cards. They may well be so overwhelming and persistent that they will absorb most of our attention and resources. "Climate change, like the threat of nuclear annihilation, puts all that humanity has struggled to achieve -- our cultures, art, music, literatures, cities, institutions, customs, religions, and history, as well as our posterity -- at risk."

"Climate change, in other words, is not so much a problem to be fixed but rather a steadily worsening condition with which we must contend for a long time."

Orr looks at issues of governance and attitude as well as more specific ideas. Though he admits, "I know of no purely rational reason for anyone to be optimistic about the human future," he opts for hope -- but of a particular kind: "Hope is a verb with its sleeves rolled up. Hopeful people are actively engaged in defying the odds or changing the odds." He quotes Vaclav Havel's definition of hope as "an orientation of the heart" and "ability to work for something because it is good."

This is one of the first books about how to contend with this "Long Emergency." It won't be the last. And how hard it is to read and then write these words, because it's real now: Very probably, the world we've known is ending, and humanity faces its greatest challenge, including the dual tasks of living in this harsher world while still doing what is necessary not to make things worse. Ending greenhouse gas pollution is still necessary, but it alone is no longer enough. We enter the age of consequences.