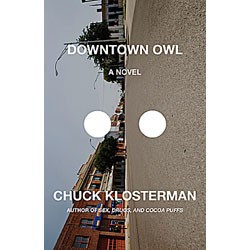 Several years ago, Chuck Klosterman rose to prominence as the author of an amusing, if sometimes tendentious memoir called Fargo Rock City. In it, he described growing up as a teenage metalhead in rural North Dakota, and trained his sharp critical mind to extolling the virtues of the sometimes despised subgenre of ’80s hair metal, redeeming the likes of Motley Crue and Ratt with witty retrospective cultural analysis. He's a contrarian, as too many rock critics tend to be, but he balances this with a finely attuned bullshit detector that punctures self-important hipster taste and the insular media world of Manhattan. As a guy from the sticks in the Big City, he still has a bit of a chip on his shoulders.

In Downtown Owl, his first novel, Klosterman proves his knack for fiction. Set in 1984 in a rural North Dakota town akin to the one he grew up in, he disingenuously claims this is not an autobiographical novel. One of the main characters is a teenager suspiciously like Klosterman's self description in Fargo Rock City though, with one vital difference: He has absolutely no interest in rock music, and has no idea why anyone would, which Klosterman plays to great comic effect.

The novel's plot, such as it is, alternates between three characters: the aforementioned Mitch, a middling high school football player who is picked on mercilessly by his philandering high school coach; Julia, a young school teacher from Minneapolis who wiles away her off time in a bar where she meets a strange self-loathing ex-football hero who listens only to the Rolling Stones; and Horace, a widower who has a much deeper inner life than most people, even his cronies at the coffee shop, would guess.

Klosterman knows these people intimately; Downtown Owl is full of closely observed characters and town myths. Almost every character has a nickname (Weezie, Vanna, Dog Lover, etc.) and Klosterman gives us their back story, which in turn tells the town's history and interconnections. The book is wildly comic, but never at the expense of its characters.

As one would expect, the high/low culture references are just right (the 1984 of both Orwell and Van Halen feature prominently), but what's surprising is how fully he inhabits the characters, particularly 73-year-old Horace, whose stoic grace forms the heart of the novel.

One flaw: Klosterman relies on an abrupt deus ex machina ending that doesn't do justice to his characters, or the emotional investment that preceded it. It's as if he didn't know how to end the book. Downtown Owl is a good first novel though, and it'll be interesting to see if Klosterman will try his hand at another.