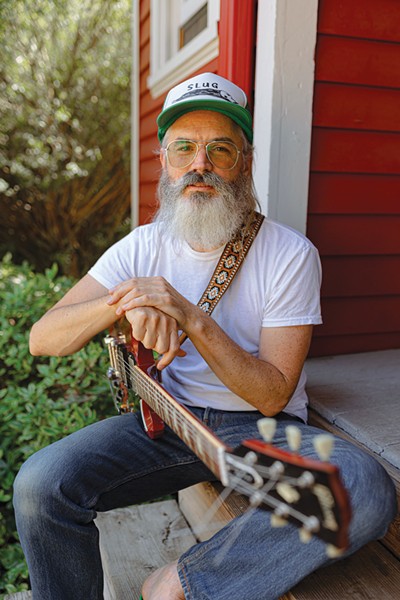 Photo by Wesley Lapointe, courtesy of the artist Rose City Band plays the Miniplex on Thursday, May 19 at 8 p.m.

I'm writing this at the beginning of the week, the day after the eclipse of the Super Flower Blood Moon. I'm probably more immune to the effects of magical thinking and "woo" than most of my fellow Redwood Curtain citizens, but I'm still a little touched by the outré aspects of the natural world. And the full moon does usually affect me: I don't like it and tend to sleep poorly during its visit. The critters are out foraging, my kitties get wild and unruly, the light becomes invasive in the late hours, and, yes, people (including myself) do seem to act a little more batty. It is a time of illusions and spectral illuminations, of familiar scenery made alien by the uncanny silvery glow. Throw an eclipse into the mix and you have a recipe for some general weirdness. Maybe there's a new story to be written out of the haunting beauty of a springtime moon. Bram Stoker's horror masterpiece Dracula has a narrative that presents itself as a series of diary entries, and May 15 (the night of our Blood Moon eclipse) corresponds to the entry wherein the young visiting estate agent (and diarist), Jonathan Harker has a terrifying tryst with a trio of female vampires in the Count's castle. All illuminated by moonlight, of course. It might not always be this way for me but it's my duty to report that the brain thinking and twitching fingers writing this are underslept, stressed and rubbed a bit raw. Hopefully, as the week progresses and the moon chills out a bit, we can all go enjoy some live events, from Gothic fun in the Ferndale sun to a rollicking roadhouse gig on the western edge of McKinleyville. Enjoy.

Ripley Johnson is perhaps best known as the guitarist for iconic San Francisco psyche bands Wooden Shjips and Moon Duo. However, did you know that the acclaimed Thrill Jockey Records artist has another act? Even better, it's coming to the Miniplex tonight at 8 p.m. ($15). Rose City Band is Johnson's solo vehicle, contorting the sometimes explosive drones of Shjips into a spacey, country elegance perfectly suited for a frontier tearoom under the light of the waning, silv'ry moon. Drag City Records star Meg Baird (of psyche supergroup Heron Oblivion fame) opens.

There are two wildly divergent types of orchestras playing tonight at 8 p.m. The Eureka Symphony presents Alluring Influences, at the Arkley Center for the Performing Arts. A concert with master violinist and bandleader Jenny Scheinman performing on a program featuring African American composer Florence Price's Symphony No. 1, as well as a rendition of Eddie Sauter's Focus, a piece that was originally written and arranged for the saxophonist Stan Getz ($19-$49). Across the (probably) foggy bay at Humbrews, you can enjoy the pomp and splendor of The Stinkfoot Orchestra, a 15-person ensemble dedicated to the music of the late great Frank Zappa and helmed by one of his most iconic vocalists, Napoleon Murphy Brock ($25, $20 advance). Quite a tough call, as these both look like fantastic shows. If it sways the pendulum of your mind at all, consider that Alluring Influences will be playing at the same time and place tomorrow evening as well.

The Clam Beach Tavern is putting on a real blast tonight. Gone-to-seed punksters The Smashed Glass (featuring bassist extraordinaire Dave O, aka The Bored Again) is teaming up with gravel-gutted string demons Bow Legged Buzzards for the kind of show that will likely test the durability of whatever remodel the new owners have done since acquisition. Check this: The last time I saw the Buzzards play at the Vet's Hall in Arcata, they drew a sizable crowd, so factor that into your ETA for the 8:30 p.m. show ($5).

Hey did you know it's World Goth Day? Neither did I but that's probably because I hung up my eyeliner in the '90s, when my form of anachronistic, thrift store '80s goth was really out of vogue, and before the wave of Hot Topic aesthetics I thankfully avoided. However, as the world becomes tenser and denser, and all cultural movements continue merging into a timeless singularity, we lucky citizens of this still-new century can enjoy whatever we want, whenever we want it. Today that's the case in Ferndale, as the Old Steeple serves as ground zero for The Outlaw Jamie B's celebration of World Goth Day. Music will be provided by DJ Zero One, Hollyester and The Pine Box Boys (who will be performing under the moniker Hollins and Hollins Mortuary Entertainment). This all-ages event begins at high noon for a very reasonable $5 entrance fee.

South Carolina-born Marcus King was a musical wunderkind, starting his guitar playing when he was only in the single digits of age. Now 26 and a fully realized master of the form, he brings his group The Marcus King Band to the Arcata Theatre Lounge for an evening of his signature kaleidoscopic style of rock-informed, blues, jazz and soul music at 8 p.m. ($39). Fellow talented youngster Hannah Wicklund opens.

How about a trivia night? Everybody loves those, right? Who among us would turn their noses up at the opportunity to dunk on strangers with our vast knowledge of arcane factoids? There are two outlets for such puzzle-bound pursuits, Savage Henry Comedy Club and The Jam. Both events are at 7 p.m. and, as far as I can tell, free.

The Jam is putting on its regular Wednesday Night Ting, a celebration of dancehall, reggae, and Afrobeats. This week's guest curators are DJ Pressure and DJ D'Vinity. The fun starts at 10 p.m. and there is no charge at the door.

Collin Yeo (he/him) has outed himself as a former teenage goth turned sad adult disinclined to moonlight. A true mutant, if ever there was one. He lives in Arcata, where his nocturnal prowling is rarely lit by the world's spotlight.