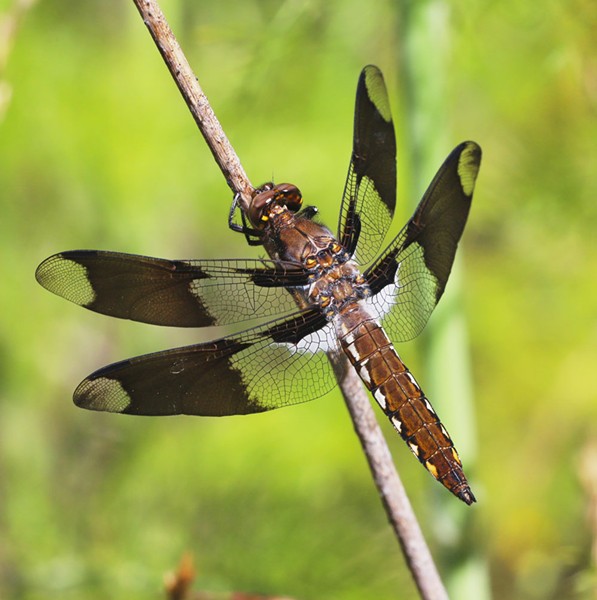 Sometimes it takes a little excursion to get back home. A fond memory from childhood was watching eight spotted skimmer dragonflies (Libellula forensis) over the little creek at my great aunt's and imagining them as World War I fighter planes in dogfights high overhead. I didn't know their names or what their aerobatics were about, but to me they were beautiful and heroic. As I grew up, I traded their beauty and wonder for facts, Latin names and "knowledge." They became "specimens," representatives of the macro invertebrate fauna of our local rivers.

Visiting a small desert pond in central Oregon last week, I once again got to see my old friends the eight spots. I watched, as they flitted quickly and did banked and flat turns, wingovers and flights up to a stall. I got to see something else as well. One was doing something very un-dogfight-like. It purposefully and repeatedly splashed its tail onto the surface of the water, something that would have terrified any WWI pilot. My grown-up sensibilities knew it was ovipositing (egg laying), as beautiful and heroic as anything Eddie Rickenbacker did.

Back home, walking along "my stretch" of the Van Duzen River, I was delighted to see a common whitetail (Plathemis lydia), a Pacific clubtail (Gomphus kurilis) and a couple of Western river cruisers (Macromia magnifica), one of the largest dragonflies you're likely to see hereabouts. 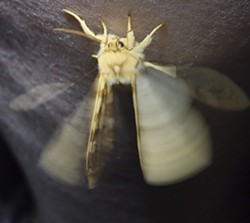 Bugs while you wait

When the lady at the tire store said it would be 45 minutes before my car was ready, I said, "Thank you," and headed for the door. On the way into the parking lot, I'd spied a drainage ditch that meanders through Fortuna. It was choked with willows, Himalaya berry vines, Queen Anne's lace and a host of other weeds too numerous to mention. I expected to see some insects and was not disappointed.

The most striking were the damselflies, represented by the large and very blue vivid dancers (Argia vivida) and small, slender Pacific forktails (Ischnura cervula). The most remarkable was a chalk white damselfly with the dark markings of a vivid dancer. Most likely this was just a normal female variant I had not seen before.

It was not surprising to see another water-loving species, the black and yellow mud dauber. This parasitoid wasp builds a nest of mud tubes she stuffs with paralyzed spiders, adds a single egg, then seals the cell off with a thick mud plug. I can't think of a worse horror scenario than to be paralyzed and sealed into a pitch dark cell, hearing the sounds as, one by one, your fellow prisoners are eaten alive. While this species rarely stings humans, I can personally attest that it is a painful experience.

On a lighter note, while going for a stroll the other night, a moth attracted by the flashlight beam landed on my wife's leg. She and it stayed still long enough for me to get my camera out and get the shot. We watched as it went away, returned and landed on the pavement, allowing a still shot for identification. It turned out to be a yellow spotted tiger moth (Lophocampa maculata). I heroically stepped in to rescue them both.

Read more of Anthony Westkamper's HumBug on Sundays at www.northcoasthournal.com.