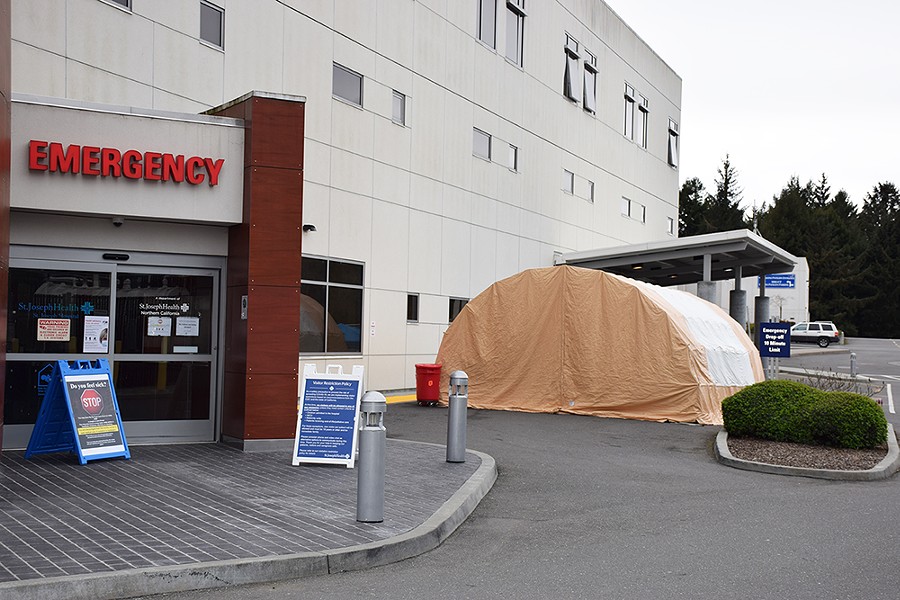 Thadeus Greenson A sign tells people not to enter the emergency room at St. Joseph Hospital if they have flu-like symptoms and the hospital set up a triage screening tent nearby for patients with symptoms consistent with the COVID-19 virus to be evaluated by medical staff.

On March 11, Humboldt County Public Health Officer Teresa Frankovich sat behind a small table in a downtown Eureka conference room and calmly explained that she had declared a local health emergency in response to the COVID-19 virus, describing it as a proactive step that would free additional resources and increase coordination between state, local and federal agencies.

At the time, California reported 143 confirmed cases of the virus in the state and Humboldt County had recorded one positive test back in February — a resident who had traveled to China but was later cleared of the virus. As of that March 11 press conference, there had been no known community transmission cases of the virus locally, but Frankovich said she expected that would change.

"It will almost certainly occur," she said.

As of March 17, when Frankovich sat down with the Journal to discuss local testing capabilities and the countywide response to the virus, that still hadn't changed, as the Centers for Disease Control and county Public Health Laboratory had combined to tested 34 local patients, still with only that sole positive test, one that came back inconclusive and 32 negatives. Just about everything else, however, had changed drastically, driven largely by the state's steadily increasing numbers, which, as the Journal went to press March 17, showed 472 confirmed positive cases and 11 deaths.

The escalating numbers have alarmed officials and residents throughout the state, prompting Gov. Gavin Newsom on March 15 to declare a state of emergency, asking for schools, bars, breweries and wineries to shutter, and residents 65 and older to shelter in place. A day later, he asked restaurants to cease providing table service and on March 16 officials issued shelter-in-place orders in seven counties around the San Francisco Bay Area. The stock market, meanwhile, had its worst day in 30 years as markets tumbled.

Locally, all school districts have decided to shutter, some well into April, reportedly after hours of at times frantic teleconference consultation with Public Health, County Superintendent of Schools Chris Hartely and state Sen. Mike McGuire. Humboldt State University and College of the Redwoods have both suspended classes and shifted to online instruction, with HSU announcing its campus is closed to the public and commencement will be canceled as the university finds "alternative ways to celebrate ... students' success," according to President Tom Jackson Jr. Venues canceled months' worth of shows, local theater companies announced indefinite hiatuses and entire offices scrambled to decentralize and allow employees to work from home.

St. Joseph, Redwood Memorial and Mad River Community hospitals all set up special intake procedures, with St. Joseph and Redwood Memorial erecting triage screening tents adjacent to their emergency rooms designed to keep symptomatic patients out of the ERs, away from other patients and staff, while they are evaluated. Mad River, meanwhile, reportedly secured all hospital entrances but one, at which it set up a screening station.

Some local residents descended on Costco, Target and grocery stores to stock up on supplies and, as happened other places, they cleared the shelves of toilet paper, hand sanitizers and some household cleaners. Others, meanwhile, carried on with life unfazed and seemingly unwilling to heed the governor's pleas for residents to engage in social distancing — limiting nonessential outings and social gatherings, and avoiding spaces where they can't maintain 6 feet of physical space between them and others. Some live music shows carried on as scheduled and, as the Journal went to press March 17, some local bars defiantly remained open.

"I think when people first started hearing about this virus in China back in January, it felt very far away," Frankovitch told the Journal. "Obviously, over just a handful of weeks that has changed drastically."

But while life in Humboldt County changed markedly over the course of a week, its test results haven't, which is due at least in part to the fact that not many people have been tested. Prior to March 11, Frankovitch said that if a local physician wanted a patient tested, the patient had to meet specific criteria: In addition to being symptomatic — meaning they had a fever, cough and runny nose — they also had to have a known contact with someone confirmed to have COVID-19 or traveled to one of just a few high-risk countries. The physician would then relay that information to Public Health, which would have to get clearance from the CDC before sending a test swab off to its laboratory.

When the Humboldt County Public Health Laboratory announced it had the ability to begin processing its own tests March 11, and that local physicians could also access to two commercial labs (LabCorp and Quest), some expected the tests would be widely available. On March 13, Public Health even pushed out messaging to local physicians via fax and email, saying they could test any symptomatic patient, even if they hadn't been in contact with someone with the virus. But testing has been slow and the Journal asked Frankovitch why.

"I would tell you it's not a simple answer," she said, before diving into specifics.

First, she said capacity is hugely limited in the Public Health lab. While the lab had 195 tests on hand as the Journal went to press, Frankovitch said the entirety of the testing supply chain — from swabs to testing reagents — is under huge strain, so there's no guarantee a supply that runs out can be replenished in a timely manner, which could shut down local testing indefinitely.

"I have the ability now to test 195 people but what if I run through those and get notice that my reagents won't be available for two weeks?" Frankovitch asked, adding that due to that uncertain supply chain, she's trying to conserve local testing capacity and having physicians send most testing samples out of the area to LabCorp and Quest's commercial labs.

Frankovitch said it's important to conserve local testing capacity because the local lab can turn around tests in about 24 hours, while the out-of-area labs generally promise results in about 72 hours but that can be extended another 24 hours or more due to shipping. So Frankovitch said Public Health is trying to make sure the local lab is only used for two types of cases.

"We want to make sure someone in a skilled nursing home, someone in ICU, a healthcare worker, can be tested (quickly)," she said, adding that these patients would have the ability to spread the virus widely in a short amount of time. "Having that information in 24 hours or less is huge as far as intervention and the things we can do to prevent spread."

The other type of case where public health will prioritize local testing, she said, is in someone who has severe underlying health issues and could quickly become gravely ill, as the test could help guide the course of life-saving treatments.

Other cases, she said, will generally be sent to the out-of-area labs. But they also have limited testing capacity and supply chain issues, which Frankovitch said physicians probably realize, making them cautious about overloading them with testing samples.

"I think they're really trying to be good stewards of the resources available," she said.

Part of the reason for that, she added, is that because there is no medicine that cures COVID-19 — average cases don't necessitate treatment — patients are just told to isolate and wait for it to pass. So when an otherwise healthy patient calls a provider with a fever, cough and a runny nose, they're often being told to go home, monitor their symptoms and wait it out.

"We don't treat people differently if you have COVID-19," she said. "We want to identify cases because it will help us reduce spread but if you have mild symptoms that you generally wouldn't go to a doctor for, the best thing you can do for this community is just stay home until you're well."

And for the record, she said, that means isolating until seven days after the first onset of symptoms or three days after all symptoms have resolved, whichever is longer.

As to those samples being sent off to LabCorp and Quest, we still don't know how many there are or their results. Because California has labeled COVID-19 a "reportable disease," the labs are required to report the results to local public health departments. But it's a new virus and a new reporting system that isn't fully up and running yet. While she said her department would be notified immediately of a positive test, Frankovitch said she doesn't anticipate getting the first full report indicating how many patients have been tested from Humboldt County until as late as March 20. There's also the lag time in testing, meaning samples taken March 14 possibly wouldn't even have had results by the time of her March 17 interview with the Journal.

Frankovitch said she understands the concern and anxiety in the local community, and the frustration that testing isn't more widely available. But she says this isn't a Humboldt County-specific problem, it's prevalent throughout much of the United States and local officials are doing everything they can to both secure more testing supplies and ensure that tests are available for the patients for whom they are most important.

She also said it's important for Humboldt County residents to recognize that it was local spread conditions in the San Francisco Bay Area that necessitated the drastic shelter-in-place orders there. Those conditions don't exist in Humboldt County — not yet, anyway. So she said residents should use this time period to be cautious and smart — limiting nonessential outings, practicing social distancing and thorough hand washing — as well as to prepare in case that shelter-in-place order comes by stocking up on necessary medications. They should also keep close tabs on the latest reports, she said, so they are aware if conditions change.