Jah Sun, plus Ash Reiter, Deadmen, GAT and a Black Out Party 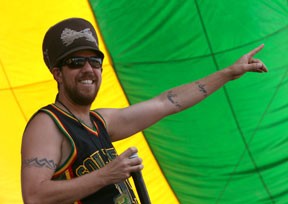 You know him as Jah Sun, the dread-locked reggae singer from Arcata, but once upon a time he was simply Jason, an Austin Texas teen, a young rapper with an attitude. "When I was into the rap thing I was like shaved head, tattoos, chains, Timbalands," said Jah Sun in a chat over the weekend. "To be honest, I was on a path to destruction, dealing with some street mentality. I was born to a 16-year-old girl child, never met my father, was raised very poor -- government cheese, Kool-Aid, food stamps, trailer homes down in South Texas, living with a young mother who didn't really know much."

Then, after some success as a rapper (shows at SxSW, talk of a major label deal) he discovered Bob Marley. "I was walking through a mall one day and I saw his video with his picture on it. I didn't know who he was -- I think it had an herb leaf on it or something -- I was like, 'Look at this guy, it looks like he gets ripped, let's check it out.' We popped in the tape and it activated my consciousness instantly. I made a drastic change in my life and started growing my locks."

Before long he was on his way West; a few years later he landed in Arcata. It took a while to find his place here musically. "Everybody was busy with their own thing, so I had to try to stand out on my own for a while. For the first year living here I was flying to L.A. every other week to record and mix. Finally I created a music family here with Ishi Dube and Universal Balance. We created the Lion Camp a few years ago and that started taking off a bit, getting some recognition." He put out an album, perhaps too soon. "I was doing a lot of things right with my business and promotion and my marketing, but I hadn't had the experience and hadn't found a way to bring my true self into the music. Even though I'm proud of all the work I've done, I know I was green, I was learning. Now I feel like I'm on the next level and I'm eager to share it with everyone."

Since playing at Earthdance last summer he's taken a break from live shows, focusing on crafting new songs and making videos, but now Jah Sun is coming back strong, ready for a show at Humboldt Brews on Friday night backed by the We A Dem Band from the Bay Area with, of course, some special guests. For more on what he's been up to, check the Hum online and follow the link to more of this interview.

Want more reggae? Jamaican vocalist Lutan Fyah joins forces with Quinto Sol, a reggae/cumbia combo from East L.A., and Caliente Caliente for a show at Arcata Theatre Lounge Thursday March 11. The Melodramatics from Chico play Cali reggae that same night over at the Jambalaya. Friday at the Jambalaya it's reggae-tinged jamrock from The Panda Conspiracy (Pandacon for short). They're a party band working out of Seattle, akin to Yogoman, but slightly less cuddly and family-friendly (they're known to include a blow-up sex doll in the act). Opening: Everyday Prophets, a "reggaetronic" band from Portland. (E. Prophets return March 20 to play Nocturnum with Ashland reggae band Monk.)

Persimmons Gallery is back in action in Redway after a winter break. Friday they bring back Three On a Tree, the jazz combo with saxman Francis Vanek, bassist Tommy Lockett and Michael Curran on drums.

Alt. pop/folkie Ash Reiter is up from San Francisco for a Friday show at the Lil' Red Lion with The Monster Women and Mister Moonbeam. Reiter is one of those bright shining songwriters who you know is on her way to bigger things. She has a bright shiny new album out, Paper Diamonds, and judging by the title track it's super good.

Also coming up from San Fran, Elliot Randall and The Deadmen, who play the Wave Saturday. Production chores for Randall's country-esque sophomore disc Caffeine and Gasoline were handled by David Simon-Baker who previously worked with Jackie Greene and The Mother Hips, which should give you a hint where Elliot and The Deadmen are coming from.

Did you miss the debut of The Lowdown? (I did.) Don't worry, they haven't left for New Orleans yet, so we have another chance to catch them Saturday night when they share a bill at the Jambalaya with Chris Wixson's Speakeasy Saints. "B ready 4 a funky-good time!!!" sez Wixson, referencing the late great James Brown.

Blues belter Kay Bohler, who dazzled at Blues by the Bay, brings her hot band to the Riverwood for a Saturday night bash.

The Chris Chandler and Paul Benoit Show comes to Old Town Coffee Monday with self-described "folken-word" artist Chandler's "raucous repertoire of radical music" accompanied by roots/Americana "guitar guru" Benoit. They've finished a new CD, "named after the first thing ya say to a hitchhiker: So, Where Ya Headed?" as Chandler explains. "Ya see the whole CD seems to be a conversation with a stranger about the road and the places it takes you. Paul Benoit plays the part of an amazing radio station that just keeps picking the right tune. It is fully recorded and mixed and wow does it sound good..." Now, like many struggling recording artists, they just need some cash for manufacturing (it's only virtual so far). To that end you can buy a copy in advance at chrischandler.org, or go hear them play and drop some money in the tip jar.

Sunday at the Red Fox, it's another roots/Americana guitar guru, Vince Herman, formerly of "polyethnic Cajun slamgrass" band Leftover Salmon, now fronting the country/rock jamband Great American Taxi. GAT has a new album too, something called Reckless Habits, which will undoubtedly be available at the merch table.

Friday's Rebel Bass all-women DJ show at the ATL has been replaced with a screening of The Big Lebowski (yes, the Dude abides), but there's still tons of electro fun: Thursday the Fox has a free Team BunnyBear dubstep thing: Dubliminal Overtones featuring T-Dub and Jsun. Friday it's Kraddy, Selector Science and Masta Shredda at Mazzotti's (with an organic fashion show beforehand). Saturday the Red Fox shifts into hip hop mode for the Equipto/Cognito Wake and Bake Tour. Sunday the Deep Groovers ramp up Sundaze at the Jam a notch with Ghosts On Tape, Mike D and their own Jsun. Then Team BunnyBear returns to the Fox Tuesday (March 16) as Grasshoppa and Itchie Fingaz "hit the breaks!" It makes me wonder, does the dance crowd only sleep on Mondays?

If you live in the greater Arcata/McKinleyville area, you might have heard about the rolling blackouts PG&E has planned for Saturday. Six Rivers Brewery is marking the occasion with "The Black Out Party" starting at 1 p.m. "where the power will be on, drinks will be pouring, food will be served, and DJ JDub will be spinning to keep you busy while your house is dark!"

Coming up Wednesday, St. Patrick's Day, Six Rivers celebrates its Sixth Anniversary with an all day party starting at noon with rootsy music on two stages. (Details in the St. Paddy's piece in the Calendar section.)

How long will it take local fans to snap up tickets to see country superstar Vince Gill? The Arkley Center was well on its way to selling out the same day the Oct. 27 show was announced. If you're lucky there might still be seats in the balcony.