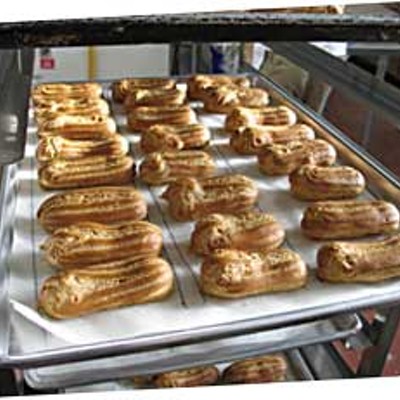 I don't really consider myself a coffee connoisseur, but I'd have to say it was the best cup of coffee I've ever had. My old friend Arno Holschuh made it for me at a new place in town. If you've been reading the Journal for a while you'll remember Arno. He and I were the paper's editorial tag-team staff for a couple of years. He left about five years ago, did some hiking, went to Germany on a Fulbright scholarship, eventually landed back in California.

To make a long story shorter, he became a coffee guy, a master barista who works for a former Fieldbrook resident, James Freeman, at Blue Bottle Coffee, one of the premier roaster/brewers in the Bay Area. When you get a cup of joe at Chez Panisse, you're drinking Blue Bottle.

I have to correct myself: What I had was a "Gibraltar," a double ristretto shot of espresso with steamed half and half and whole milk, and Arno is a gifted expert at pulling shots and steaming milk. Ristretto? That's coffee geek talk for a short shot made with very finely ground coffee, tamped just right, timed perfectly to create a creamy brown liquid. The organic milk is blasted with steam into an equally creamy froth. Arno explained something about tiny bubbles and the grooves in the tongue and the way they affect taste, but I'll admit he was over my head at that point.

What was this barista extraordinaire doing in Arcata? He was training baristas in the refined art of pulling shots for Café Brio, the place that's been coming together behind the fence on the corner of 8th and G, former home of Arcata Muffler.

Now a bit more disclosure is in order. When I moved from McKinleyville to Arcata a few years back, Serge Scherbatskoy, owner of Brio Breadworks, became my next-door neighbor. We got to be friends fighting "The Battle for Bayview" (See Journal cover story April 15, 2004) and we stayed friends after he moved around the corner. I've been watching Café Brio come together for a few years now, discussing his hopes and dreams while noshing on good cheese, great bread and glasses of fine French wine. (Serge has an impressive wine cellar.)

I even introduced Serge to Arno. He tried Blue Bottle and decided, "Their coffee has a flavor profile that fits into the cuisine style we're doing at the café."

I've also been watching closely as the Brio Café moves toward opening day, scheduled for this Saturday, April 14, the same day the Farmers' Market starts its new season on the Arcata Plaza.

Opening a café is a stressful proposition, and Serge has a zillion things left to do. Nevertheless, I convinced him to take a moment at one of the tables in the outdoor portion of the café to talk about how the place came into being.

"The idea was born around three years ago," he began. "I have a bakery consultant, Michel Suas, who I trust implicitly. He helped set up the Breadworks."

Serge paused, recalling that the Journal did a cover story on Brio Breadworks eight years ago, not long after it opened. ("New Kid on the Bread Block," March 18, 1999.)

"Anyway, I asked my consultant to come back up and look at the business. I was interested in his opinion: Are we running smoothly? Could we make more profit somehow? He came up for a few days and we wandered around looking at the stores and so on. He thought we were doing great with the Breadworks and didn't need to change very much; all we could use was more volume. It's like we have a strong bridge with not much traffic. We could carry more."

Michel's recommendation: Open a bakery/café. He even suggested a model - Tartine Bakery, a place in San Francisco that he'd helped set up. "I walked in the place and it blew me away," said Serge. "I thought a place like it would just rock in Arcata."

At this point in our conversation the architect Kash Boodjeh appeared. He'd come to consult with a team of cabinetmakers doing a last-minute adjustment to bring the place into compliance with the federal Americans with Disabilities Act guidelines. Kash came up with the redesign that transformed Arcata Muffler, a former gas station, into a surprisingly sunny space with an airy feel. He humbly deferred to Serge, saying, "It's all his doing. It was fun - fun and hair-raising."

Serge also gives full credit to Steve and Amy Bohner and their Alchemy Construction crew, who executed Kash's design. The transformation is totally amazing. The deep forest green building fits in perfectly on the block with attention to detail that's true to the plaza's architectural history. In fact, looking at the exterior, you'd think it was a building that had been there for decades, not a totally new façade with almost no relation to the old muffler shop.

Serge noted, "That was our original concept. I told him I wanted it to look like a 1930s grocery store that's been remodeled."

The concept for the café and its menu? "The style is like French rustic with a slightly overblown American flair. We're adding in some Humboldt-style touches. We'll do a carrot cake and we'll make chai tea, things you won't find at a place like Tartine.

"We want to offer high quality food in a very relaxed social atmosphere, a place where you can hang out and meet your friends, have a glass of wine, and have food that's top quality. I'm hoping it will be a place where people will expand their vision a little bit and relax while they watch the world go by on the plaza."

The menu is divided into sections, with breakfast served until 11:30 a.m. including squeezed-to-order orange juice, brioche bread pudding, poached eggs served on a potato tart or with bread and prosciutto, or cold cereal deluxe - a Muesli made with a mix of toasted grains and nuts, yogurt and fruit. I tried one of the test batches on Friday and it was divine.

Then there's the "all day" menu, which Serge describes as "savory goods": potato tarts, quiche, ham and cheese croissants or, something I got addicted to at the Brio booth at the Farmers' Market, the gougère, a cheesy (in a good way), puffy pastry made with Gruyère.

There are a couple of seasonal salads and a small selection of simple sandwiches: cold ones (tuna, egg salad, ham and Swiss or avocado and cheese) and hot ones available from noon on, like the famous Croque Monsieur, basically ham and cheese pressed in a grill panini-style, but all gourmet high-end: Gruyère, thin sliced Niman Ranch ham (or sundried tomatoes or mushrooms for the non-omnivores) with fresh thyme leaves.

There are a few more paninis, all akin to the sandwiches you'd find in a small café in Italy or France but with a difference. One is an only-in-Humboldt concoction made with Cypress Grove's award-winning Humboldt Fog goat cheese and wilted greens on Brio walnut levain, and of course they're all made with one kind of fresh baked Brio bread or another.

"The sandwiches are all ready-to-go," Serge explained. "What we're hoping for is a fast lunch turnaround time so you can get coffee and a sandwich and get out and do something else with your lunch hour besides waiting."

And being a bakery, of course there is a wide range of pastries made right there: assorted tarts, tortes, cakes, éclairs, turnovers, some of them already road-tested at the Saturday markets, some new tricks learned by pastry Chef extraordinaire Leah Stamper. I tried out one new one, a piece of Passionfruit Bavarian Cake with shaved coconut on top - to die for.

Early evening (4 p.m.) the place shifts gears again, offering "afternoon plates," including bread and cheese, bread and crudités (aka vegetables), bread and meat, or bread and bowls of olives, either French ones or Henry's Olives, locally-made organic California treasures. They don't have dinner per se, but you can get a pot pie (du jour) or a bowl of French onion soup.

This portion of the menu mostly seems designed as accompaniment to sipping some fine wine after work. The wine list is mostly by the glass. "We have Moonstone Crossing for our California wines," said Serge, "then most of the rest are French and they're pretty much all from Kermit Lynch."

I've heard a lot about Kermit Lynch since I've known Serge; the guy is legendary as a selector of great little French wines. Kermit is credited with finding a market for small-production French wines in America, thus reinvigorating what had been a fading tradition. And the French love him for it, which, indirectly, means that Serge won't be in town when Café Brio opens Saturday.

Instead he'll be in San Francisco. Because he's one of Kermit's dedicated patrons, he has been invited to an exclusive private ceremony at which Lynch will be awarded the insignia of Chevalier de la Legion d'Honneur by the French government, thus joining winemaker Robert Mondavi, wine critic Robert Parker and chef Julia Child among the few Americans so honored. The party, catered by Alice Waters with Boz Scaggs providing entertainment, was something Serge could not pass up. "My employees insisted I go," he said with just a hint of guilt, "so I guess I have to."

Don't worry, it will be a short trip. Getting a new business dialed in is a lot of work, but Serge figures it will all be worth it. It's not hard to imagine a table full of friends relaxing at the café together on a warm summer eve, sipping Gibraltars, or maybe one of those wines Kermit brought over, talking about the state of the world as it passes by on the plaza. It's Serge's dream, and it's about to come true.