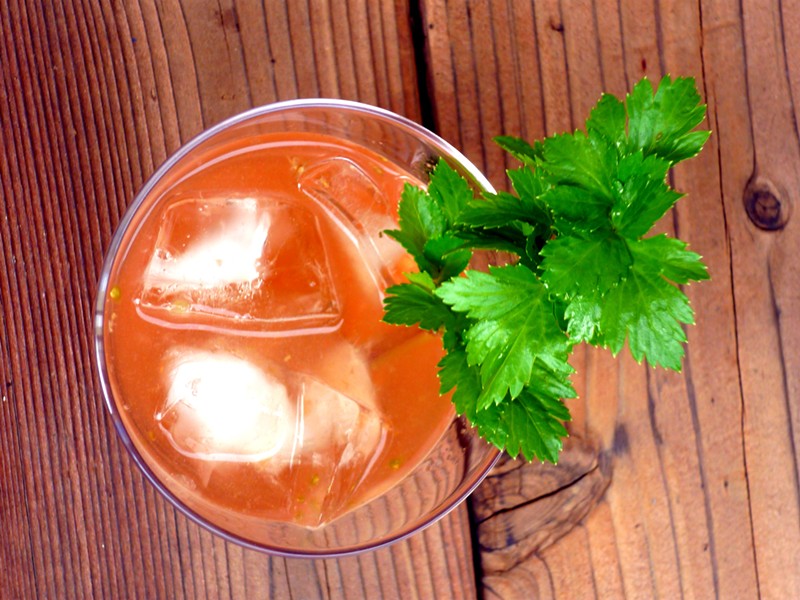 It's not quite time to put in a vegetable garden yet -- it's too cold for tomatoes and peppers and all that -- but if the weather's nice and you're just itching to get something in the ground, I've got three interesting, cocktail-friendly plants for you.

Strawberries. The trick with strawberries is to plant them in a vertical planter or hanging basket so the berries are more or less suspended in the air, not turning to mush on the ground. I turned an old wooden medicine cabinet into a vertical planter last year by knocking out the mirror and replacing it with chicken wire, then drilling holes in the top, bottom, and back for drainage and air circulation. I placed it on its back and filled it with potting soil enriched with coco fiber. (Ask at the garden center for a potting soil with coco fiber designed for hanging baskets -- it holds much more water, which you'll want in a vertical planter.) With the chicken wire-framed door closed, I planted strawberries into the container, watered it, and let it get rooted for a couple of weeks before mounting it on a fence with L-brackets. Once established, it just needs to be watered through holes drilled in the top or by gently spraying it head-on with the hose.

The strawberries to get are everbearing alpine strawberries, Fragaria vesca, which put out small, tart berries over a long season. (Actually, there are no bad strawberries to get. Try a bunch and you'll figure out which ones you like best.) I particularly like "Golden Alexandria" for its lime green foliage, and "Tristan Day" for its unusual pink flowers. (The fruit's not bad, either.)

They need at least six hours of sun and protection from hard frosts. Give them regular water and rich, organic compost. I feed all container plants with kelp meal and fish emulsion throughout the growing season; a little of that couldn't hurt either.

Strawberry plants don't live forever. Expect to get five years out of them, and that's only if you renew them every spring by pulling off brown leaves, snipping back runners, and generally trimming the whole thing so that new vegetation sprouts from the crowns.

But once you've got a regular crop of strawberries going, cocktail hour takes care of itself. Smash them into rum, drop them in prosecco -- you get the idea.

Mexican Sour Gherkin Cucumber: This is not actually a cucumber. It's a close relative, Melothria scabra, native to Central America and Mexico, with a bright, tart flavor a bit bolder than a cucumber -- but the flavor isn't the only reason to grow this one. The fruit is only the size of a grape, resembling miniature watermelons with a mottled green and white skin. It's the perfect size for a drink garnish.

Look for them in garden centers; if you can't find them, grow them from seed. They'll get up and running quickly, they'll tolerate cold better than a regular cucumber, and they'll produce loads of fruit all season long. Just be sure to give them wire or a trellis to climb -- they can reach 10 feet tall, and will produce more fruit than you know what to do with. That's okay, because your friends will all happily take the surplus. Just give them sun, rich soil and regular water, then stand back.

Celery. If you've never grown celery, this is the year you're going to start. It would never have occurred to me to plant celery in my garden, but someone gave me a few starts, so what choice did I have? I happened to have a good spot for them: I put them near the kitchen door where they get rich, moist soil and about a half day of shade. The celery thrived, and I found out that I'd been crazy not to grow it before. I used it in everything: soups, salads, all kinds of dishes that could be improved by celery if only I had some on hand. And, of course, I used it in drinks.

The celery to grow is "Redventure," a cross between an heirloom strain called "Giant Red" and a popular commercial variety called "Ventura." Crossing those two resulted in a celery with slender red stems about the diameter of a pencil -- perfect for swizzle sticks. And it has a rich, strong celery flavor that's bold enough for cocktails.

You can easily start it from seed, but I'd spring for a six-pack of it so you can start using it right away. Just give it rich soil, plan on watering it about once a week when it's not raining, and give it some shade. "Redventure" will continually produce new stalks all season long, but in the second year it will want to push up a central stalk and set seed. You can try cutting the stalk down, but the plant will win in the end and put all its energy into reproducing.

Use the slender stalks as a garnish in a Bloody Mary, or muddle them with vodka in any kind of spicy, savory cocktail like this one. It calls for tomatoes, which aren't at all in season -- but those greenhouse-grown cherry tomatoes that are available in grocery stores year-round are actually a pretty nice treat right about now. Give it a try:

Reserve a celery stalk, cherry tomato or cucumber for garnish. Combine all ingredients except the tonic water in a cocktail shaker and gently crush the vegetables and herbs, making sure to release the tomato juice. Shake with ice and strain into a tumbler filled with ice. Top with tonic water and add garnish.