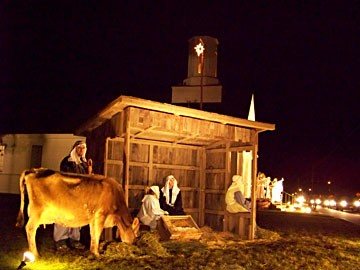 A line of taillights glowing redder than Rudolph's nose wrapped around the block -- families in Caravans and Expeditions waiting bumper-to-bumper to drive past the baby Jesus. Out on I Street, motorists on last-minute Christmas errands honked in annoyance at the sedans and minivans blocking the far-right lane, sitting through green lights because Buhne was totally backed up. A sleek black BMW 535i with one working headlight slowly turned left across traffic at the corner of Buhne and J, nosing its way into the procession. A few cars back someone hollered, "No cutting, line hopper!"

The parade of cars funneled into a narrow lane that hugged the sidewalk, delineated by bright orange traffic cones. Standing at the first of these cones, two men, bundled up in the evening chill, shifted from foot to foot in an effort to stay warm. As the headlights lurched forward in stops and starts, the men cheerfully greeted each family through the driver's side window: "Hi! Welcome to First Covenant's live nativity." Passing a slim CD case or cassette to each driver, they explained how it works. "You just pop that in. It'll tell you when to advance." Smiling big, they sent each vehicle on its way with a chipper, "Thank you for coming. Merry Christmas to ya."

This was First Covenant's fourth go-round with the live nativity, and they had the routine down pat. Each of the seven scenes -- up from the original five -- was illuminated by floodlights arranged neatly on the lawn. The cast of roughly 35 congregants, who ranged in age from five to somewhere near 60, wore costumes hand-crafted by Leslie Savage, another member of the congregation. Standing under canopies and on the church stairs, the actors extended down the length of the block, striking poses and standing in formation as their robes flapped in the bitter wind.

Under the first canopy sat a prophet, writing on a scroll at a wooden desk with painted plastic garbage bags playing boulders. Pastor Rick McRostie's voice came through the car speakers: "Tonight you will see seven scenes that tell the true story of Christmas." Under the second canopy, a man with angel wings stood on a box -- partially obscured by his extra-long gown -- and spread his arms before a woman in a shawl. This was the angel Gabriel, the CD announced, telling the Virgin Mary she'd soon give birth to the Son of God. At the third station, two teenagers dressed as Mary and Joseph stood under a white canopy with a fidgety donkey. As the CD told of their journey to Bethlehem, "Joseph" absentmindedly hooked his staff on the underside of the tent's scaffolding and let it hang there, swinging in the breeze.

Next were three shepherds, hands on staffs, and some rather bored-looking sheep, watching the cars pass. On the steps of the church, eight angels with billowing white gowns and golden crowns spread their arms, and as the CD erupted into heralding trumpets and a chorus of "God is the Lord! God is the Lord!" the angels lifted their arms to the sky in unison, shifting them left then right in time with the music drifting out the passenger-side window.

The manger stood on the corner under a wooden awning. A Jersey cow with a numbered yellow tag punched through her ear stood blank-faced at the periphery as a new Mary and Joseph knelt over a plastic doll nestled in the hay. (Organizer Char Kellogg had asked mothers if they'd like to volunteer their infants for the role of Jesus but got no takers.) And finally, three wise men stood alongside painted plywood camels, looking to the electric star suspended from a pole above the wooden awning.

"Christmas is a time to give gifts," concluded Pastor McRostie as an instrumental version of "Silent Night" played in the background. "It was the time God gave his most precious gift, the gift of His son, Jesus." With that, the program ended. Each car was given a disc of nativity music recorded by church member Paul Gossard. A runner stationed at the end of the line grabbed the tour guide CDs and carried them back to the start of the line, where the headlights of idling cars still wrapped around the corner.