No peace in SoHum over Richardson Grove realign 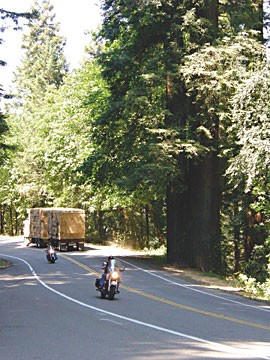 The public-comment process for Caltrans's proposed realignment of U.S. Highway 101 at Richardson Grove began with a low-key meeting in late September 2007, held at the Benbow Valley RV Resort. Three agency representatives spent the afternoon answering polite queries from about two dozen Southern Humboldt and Northern Mendocino residents, most of whom seemed content to simply read the written materials on hand and closely examine the visual aids that had been hurriedly completed just that afternoon. The idea seemed quite simple: having been given a clear understanding that the local community would not tolerate the cutting of any old-growth trees, Caltrans had instructed its engineers to draft a "minimum-impact" plan that would nevertheless meet the safety requirements of the Surface Transportation Assistance Act, or STAA.

The plan proposed that afternoon was, accordingly, very straightforward -- at least by Caltrans standards. Meeting attendees saw a mile-long project area divided into three sections, with the southernmost point on State Parks property north of the Hartsook Inn, and the northernmost point at Singing Trees Recovery Center. Major "realignment," as the agency termed it, would only be performed in a 100- to 150-foot-long segment of Section 1, in the south. Section 2 would involve repaving, or "asphalt rehabilitation," only. Section 3 would include some minor realignment. The total cost was estimated at $3 million, and Caltrans projected that if approved, the project would be completed over a two-month period in fall 2008.

Less than six months later, the mood was decidedly different during Caltrans's second public meeting, held at the Wharfinger Building in Eureka. Well more than a hundred people attended; passions were high, with a fairly equal number arguing for and against the proposal. A majority of business owners present asserted that approval was vital to their interests, because offloading costs are already high and stricter fuel-efficiency standards will result in further homogenization, as it were, of the trucking industry -- meaning that the smaller trucks that can legally maneuver through the grove will no longer be manufactured. Project opponents, who were just as numerous, argued against it on several environmental grounds, and further alleged that lifting the restrictions on the 101 corridor would open the floodgates to big-box stores, increased traffic, and noise pollution.

For starters, the environmental community reacted against the proposal in mass unison. A Nov. 20, 2007 letter submitted to Caltrans by Greg King of the Northcoast Environmental Center provided a template for local environmentalists' concerns, which included objections to Caltrans's refusal to commission a full Environmental Impact Report (EIR); questions about the possible impact of road construction on redwood roots; concerns about the potential of big-box development; and a request that Caltrans opt for the "no-build alternative," especially because -- contrary to a mandate in the State Highway Code -- no provision was made for bicycle or pedestrian access.

As if that wasn't enough, there was the matter of the proposal itself -- which didn't remain small and simple for long. When Caltrans determined that removal of trees across from Singing Trees might result in a slippery hillside, the construction of a 300-foot-long retaining wall was added to the proposal. The $3 million, two-month-long project ballooned to a $6 million, eight- or nine-month-long one -- and local business owners, the ones who are actually located in the grove, went from feeling queasy about the idea to being worried about having to close their doors. In the case of Patti Watson, the executive director of Singing Trees, the concern was about the radically altered view that a wall, as opposed to a bank of trees, would provide. Meanwhile, Dan Baleme, owner of One Log House Espresso & Gifts, argued that the economic impact of traffic control in the vicinity would be devastating.

"Caltrans has promised to meet with local businesses," Baleme told the North Coast Journal on Jan. 3, "because at the [public] meetings, basic information is presented, but there are no answers to our concerns about traffic flow and stoppages next to our businesses." Baleme took up the issue with Caltrans back when the proposal was still for a few weeks' work done during the off-season; since it's grown "to an eight- or nine-month long construction period, which is a lot longer than we expected," his and others' worries have become even more urgent. "Johanna Rodoni called Caltrans about the issues with the local businesses," he said. "I wrote a letter too, and spent quite a bit of time on the phone with them."

According to Baleme, "when northbound traffic is blocked, southbound traffic can't get in to businesses on the other side, and vice versa -- and when people see that they might be held up in traffic, once they can go they don't stop at all." But business isn't his only concern: Baleme also believes that by "trying to please everybody," Caltrans will actually compromise the safety of the grove, which is already questionable. "My opinion is that all it's going to do is take money out of local businesses and increase truck traffic considerably," he said, "and I don't think it's going to make the road any safer. In fact, I think it'll be less safe."

At a public meeting at the River Lodge in Fortuna on Dec. 15, Piercy fire commissioner Jeff Hedin questioned why a recently released Draft EIR (DEIR) does not mention emergency first responders. Highway 101 in Southern Humboldt and Northern Mendocino is served almost exclusively by volunteer fire departments; Hedin asked how they would be expected to respond to a potentially increased number of accidents in the narrow corridor. Caltrans recently dropped the speed limit from 40 to 35 m.p.h. in sections of the grove, "but the truckers and the tourists don't even notice the speed-limit reduction," Baleme alleged. "There's safety only as long as the CHP is on either side of the grove, writing tickets. As soon as they're gone, it gets crazy again. I don't have a problem with the big trucks, but I don't think the road can handle it -- I think they either need to do much more work, or not do it at all."

Paradoxically, in this case there's agreement between a business owner and an environmentalist -- namely, Scott Greacen, Executive Director of the Environmental Protection Information Center. Like King, Greacen feels passionately about bicycle access through the grove, which is, after all, a state park. "Caltrans has said that this is about access, not safety," Greacen said on Jan. 2. "But the [Highway Code] policy specifies that bicyclists and pedestrians must be taken care of at the same time. It's appalling that some of the places that are a real draw -- the old-growth groves -- have virtually no bike access. The policy exists because whenever they're split [drivers' and bicyclists' concerns], the bike stuff never gets done."

Does this mean that Greacen is in favor of a substantially larger project? Not exactly. "We would prefer a solution that wouldn't change the roadway, like signalizing the grove, and -- I know this won't be a popular idea in some quarters -- making it one-way through the narrowest portions, so the trucks do have the space. It would cost a lot less than $6 million." In that vein, Greacen asked, "Why, with the budget being what it is, does this rise to the level of 'must be done immediately'?"

On another note, Greacen touched upon "the pervasive lack of trust" in Caltrans that has long permeated the environmental community. "The overall take is, there's a tremendous amount of skepticism over the rush to develop the place, and the need for it. Certain cattle trucks can travel through it at this point, but we're hearing they might not be able to at some point in the future. Why they should be exempt, when small manufacturing trucks are not, is very confusing to me."

While the naysayers may feel stymied in their attempts to get clear answers from Caltrans, their efforts certainly haven't been undertaken in vain: In early May 2008, the agency agreed to a full EIR "after getting input from all over the state," Caltrans spokeswoman Julie East said. A DEIR was released in early December 2008, and about 50 people braved snow and rain to attend the Dec. 15 meeting. On Dec. 19, East said the agency had not kept a running tally of the number of comments received to date, but a full accounting will be made before the final EIR is released. She added that, in response to continued concerns about the number of trees that would be removed, the agency has "refined and reduced the [proposed] tree take," especially in the area where the retaining wall would be built.

Want your own copy of this exciting, 181-page read? Go to the Caltrans website, www.dot.ca.gov/dist1/d1projects/richardson_grove/reports.htm. If you're a troglodyte, you can pick up a hard copy, available at both branches of the Humboldt County Library. Additionally, the DEIR may be reviewed or purchased at the Caltrans District 1 office, 1656 Union St. in Eureka. To cover the cost of printing, $10 will be charged for each copy purchased.

A May 2009 "target date for [project] clearance and approval" has been set. If approved, Caltrans will seek a contractor in late 2009. Written comments will be accepted through January 30; they should be addressed to Kim Floyd, Project Manager, P.O. Box 3700, Eureka, Calif., 95502. Floyd can also be contacted directly at 441-5739, or via e-mail at Kim_Floyd@dot.ca.gov.