Driven Out: The Forgotten War Against the Chinese 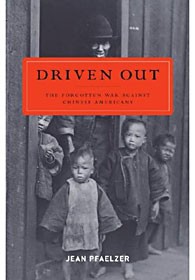 Late on the night of February 6, 1885, a gallows was built on Fourth Street between E and F Streets on the edge of Chinatown, in Eureka, a foggy lumber town on California's North Coast."

When Jean Pfaelzer's new book arrived in the mail, it opened to that page and I almost dropped it. A gallows in downtown Eureka? Chinatown? I didn't know anything about this. Of course, I didn't grow up here, but as I asked around I found that very few people knew anything about the expulsion of Chinese people from Humboldt County in the late 19th and early 20th centuries.

The book is Driven Out: The Forgotten War Against Chinese Americans , and University of Delaware professor Pfaelzer was motivated to write it after she noticed the near absence of Asian students at HSU when she taught there years ago. She had heard that Chinese residents were forced out of the area and not allowed to return until the 1950s, but it was a story that had only been told as local lore. Pfaelzer later moved to Washington, DC, where she worked in a number of policy jobs, and then went on to her teaching position at the University of Delaware.

But she kept a cabin in Big Lagoon, and continued to wonder about this story when she came back to spend time in Humboldt County. When she began the research for Driven Out , which is her fifth book, she was surprised to realize that Eureka was far from the only community to round up Chinese-Americans and force them out of town. However, Eureka's expulsion was so quick and thorough that the tactics came to be called "The Eureka Method."

Eureka's Chinese expulsion began when a city councilmember was killed in crossfire in Chinatown, leading an angry mob to force every Chinese person out of town. It continued for decades through official policy and the informal pressure of local law enforcement and citizen groups. A booklet produced by the Chamber of Commerce called The Humboldt Souvenir bragged that:

"One fact makes Humboldt unique among the counties of California and indeed, on the Pacific Coast -- we have no Chinese The community rose up as a man and drove every Chinese out of the county Even in far-off China, the coolies know that they are not permitted to come here, and none ever attempt it."

Pfaelzer is getting ready for a book tour that will include four stops in Humboldt County next week. I spoke to her by phone and she was getting ready to leave. Here's just an excerpt from our conversation, but go see her next week to learn more.

NCJ: I was surprised to see the names of so many prominent Eureka citizens involved in the expulsion. Buhne, Sweasey -- you don't have to know much about Eureka history to recognize these names.

JP: It's a mistake to think that this was all a working-class movement against the Chinese. In Eureka, as in other towns, the mayor was involved, the county board of supervisors, and the owners of the lumber companies. It was in their interest to have a low-paid workforce, but they abandoned those interests to assault the Chinese.

I've thought about this a lot. What would make them do this? It was still a very racist era. There were already laws preventing Chinese from owning property or voting. And I think that even for these newly middle and upper class people, the isolation and loneliness of a rural town, and the need to stitch together a community, became more important than their economic need for low-paid workers. So they turned on the Chinese.

I also think that they saw in the Chinese much of what they didn't like in their own lives. The dirt, the isolation, the predominantly male community. In purging the Chinese, they were getting rid of part of their life that they wanted to change. There weren't enough women, there weren't enough children, or enough churches -- all of this was just starting to change in the late 1800s.

NCJ: How did you find this story? What was involved in bringing this piece of history to light?

JP: One of the troubling parts of the story is that the information wasn't hard to find. The newspaper accounts and clipping files gave me a first window into this. Why hadn't this story been told before? It wasn't deeply buried in archives. It's just under the surface. I grew up in California. I had no idea that this had happened in California.

NCJ: This is a really difficult piece of history to come to terms with. What now? What do you think communities who were a part of the expulsion will take from this?

JP: In Tacoma, Wash., where there was a similarly brutal purge of Chinese people, the Chinese community and the progressive white community have obtained four acres of waterfront land and they're building the Chinese Reconciliation Park. I'm also aware that there is a motion before the city council in Truckee, where they purged the Chinese by starving them out, to offer an apology. It doesn't necessarily make the Chinese whole or give them their land back, but it acknowledges the history so that people can move forward toward a more diverse community.

NCJ: What else do you want people to take away from this book?

JP: I think that we can learn from the courage of the Chinese people. They came together and sued Eureka for damages and for being the victim of mob violence. It's important not to view them just as victims. Their lawsuit explodes so many myths of Chinese immigrants as docile and subservient. They were standing up for their civil rights, and they can be a model for all of us today.