Dry is from Mars, Wet is from Venus 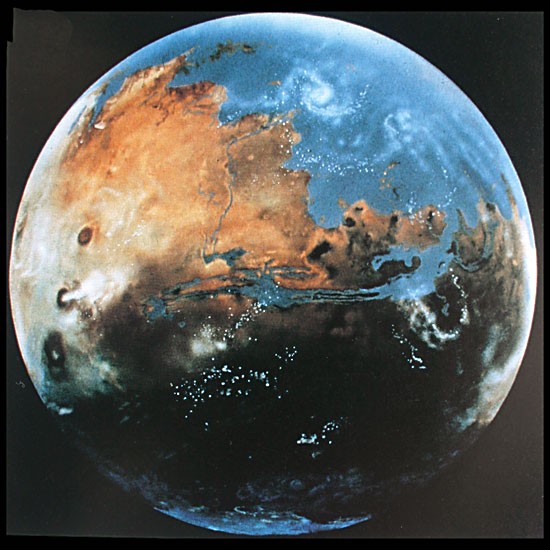 Maybe Humboldt isn't the best location for clear skies. After all, our airport was originally built so World War II pilots could practice landing in fog. Even here, though, we should occasionally be able to spot our closest planetary neighbors this month. Throughout July, Venus and Mars dance close to each other in the morning sky. They rise about three hours before the sun, and, given clear skies, are easily visible low in the east until the dawn light engulfs them.

We can learn a lot about the two planets just by looking at them with the naked eye. Mars is dim and orange (the color is very obvious through binoculars), while Venus is comparatively bright and pure white. True, Mars is now about twice as far away as Venus, and it's also about half the diameter, but there's a more obvious reason for the large discrepancy in brightness. When we see Venus, we're seeing sunlight mirrored off crystals of sulphuric acid atop the thick carbon dioxide atmosphere, while all we see of Mars is the sun reflected from its dry, dusty, iron-rich soil. It's oxidized iron -- rust -- that gives it its distinctive color.

That's it, in a nutshell (I'm only allowed 400 words!): Venus is bright because it has a wet, reflective atmosphere. Mars is dim because it hasn't.

Despite what it looks like now, Venus, Earth and Mars were sister planets in our solar system's youth, some four billion years ago, when the sun was putting out 30 percent less energy than it does today. They had similar surface minerals, similar atmospheric gases (mainly carbon dioxide) and all were temperate enough to support oceans of liquid water.

Because of its comparatively low gravity (about 38 percent that of Earth), Mars has lost most of its carbon dioxide to space, while Venus' gravity (90 percent Earth's) traps the gas in a runaway greenhouse effect. You could walk around in a spacesuit on Mars, while on Venus you'd be fried, crushed and eaten to death by the acidic atmosphere.

Barry Evans (barryevans9@yahoo.com) spends his days in Old Town Eureka wondering if men really are from Mars He hasn't a clue where women are from.