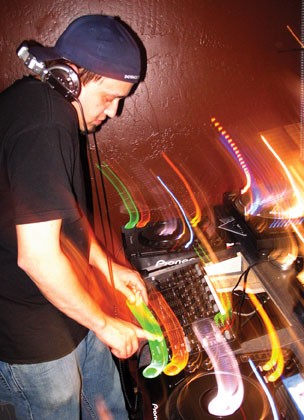 Dan Giannotta, aka DJ Dub Cowboy, gets in on the celebration of 50 years of KHSU Public Radio with a live version of his Reggae Jamdown at Humboldt Brews Thursday night (his radio show runs 2-4 p.m. Fridays on KHSU). He'll have live reggae by Brooklyn-born Rastaman and self-proclaimed "Tru Ganjaman" Rocker T, Marcia Davis (also from Brooklyn) with Outro, plus Humboldt's own Ishi Dube (also celebrating his birthday that night), all of them backed by The Mor Love Band (Rocker T's band). Dub Cowboy opens the show with a "Jamdown" set mixed on the turntables "set-up just like on the radio show," which is to say two turntables spinning Serato style.

"I'm actually repairing my turntables right now," said Dan, calling from his workshop. He notes that, "This is the only time this year I'm being Dub Cowboy live. I've been performing at Sidelines and Ragg's as Mixmaster Krushington." (Or as he prefers DJ MXMSTR KRSHN2N.) The difference? "With Dub Cowboy it's just reggae -- with Krushington it's all kinds of music, with an emphasis on Top-40 and high energy mainstream music for dancers, with music videos and visuals. It's all Serato scratch live."

For the uninitiated he explains, "Serato is a software that allows me to DJ with digital files -- I work with them as a beta-tester. It's real vinyl controlling things on the computer, which allows me to mix music and videos live. I call it spinning in three dimensions."

After 10 years spinning records in Humboldt and almost seven years on KHSU, he sees the new persona as "going back to basics. In the last year I DJed 195 times publicly and did 50 radio shows, all with no promotion, no flyers or anything. I built a following just with the music. When I do a good job, the dancefloor is packed and people come back. Now I'm stepping up the hype, bringing MXMSTR KRSHN2N on full force." Most weeks you can catch him spinning (in 3-D) Thursdays and Saturdays at Sidelines (he's taking this Thursday off for the show at HumBrews). Fridays he's at Ragg's Rack Room. He promises to make you dance.

Funky bassist and former local Aaron Bortz, now a member of Bay Area "heavy heavy Afrobeat" band Albino!, writes to say, "We are coming to town again on Friday to play a very special show at the Red Fox Tavern with our friends WoMama (actually Jesse and Oliver will perform with Albino too!) as part of the NHS GreenWeek. With the steam being gained from the hit Broadway musical, FELA!, there seems to be a serious resurgence and revival of Afrobeat music in the U.S. and globally. We feel like we are a part of it and can't be more excited to get out there and spread our music. As Fela said, 'Music is the weapon of the future.'

So, what is this NHS GreenWeek? It's an Earth Day collab with World Famous Productions, Deep Groove Society and Passion Presents teaming with Northcoast Horticulture Supply to support greenish nonprofits: GreenWheels, Humboldt Baykeeper, Northcoast Marine Mammal Center and McKinleyville Skatepark. After several shows earlier this week, there are more to come: Next up, a World Famous Productions show Thursday at Arcata Theatre Lounge with Satori Social, a live dubstep/electro-dance project led by classically trained pianist/software producer Evan Bluetech, and psychedelic dub artist Ott plus visuals by Phaedroid with Andrew Jones and dancer Phaedra. After Friday's GreenWeek Albino! show in Eureka, the action returns to the ATL for a Saturday night WFP blast of live electro/hip hop/funk featuring Signal Path, Blockhead, Kush Arora, Geno Cochino and Moo-Got-2. Earlier in the day, there's a McKinleyville Skate Park fundraiser in the parking lot of NHS McKinleyville with live music, half pipe skate demos and a 2 p.m. presentation of checks to the nonprofits.

Back in 1969, the Fillmore's legendary Bill Graham signed the Bay Area soul band Cold Blood and in the five years that followed the band produced what singer Lydia Pence describes as "several good chunks of vinyl." (I concur; they were great.) Lydia's still at it, still soulful as ever, backed by a new version of Cold Blood. The band hits the Riverwood Inn Saturday night. Blues and soul fans will be out on force.

Once upon a time Humboldt State had an annual bash called Lumberjack Days. For reasons we won't go into here, that event transformed into the Sustainable Living Arts & Music (SLAM) Festival. This year SLAM seems to have downsized -- what's left is an Earth Day Dance Friday in the Depot with the Humboldt Calypso Band, Berel Alexander Ensemble and Children of the Sun.

Our favorite folksinger Lila Nelson may have moved to Oakland, but we suspect her heart's still in Humboldt since that's where she's celebrating her birthday this weekend. She's headlining a show Saturday night at Arcata Playhouse, bringing along her friends from Mendo, The Blushin' Roulettes and the folk/grunge spin-off Gwyneth and Monko, with Gwyneth Moreland  and Michael Monko. Note: Lila's b-day is actually Friday, but she did not want to make her friends choose between her party and that night's Bruce Cockburn show at the ATL (see calendar for details on that one).

Coming Sunday to the Arcata Playhouse: Casey Neill and the Norway Rats down from Portland for some kick-ass, post-folk-punk, thought-provoking songs with Celtic undertones and shades of Americana.

Add to the list of Portlanders coming to town, Revel Me!, a dance/music project featuring musicians from the Balkan/klezmer/gypsy jazz combo Underscore Orkestra and contemporary bellydancers Danielle Smith and Bevin Victoria. The Revel Me! Cali tour brings them to the Arcata Playhouse Wednesday, April 28, with honking Bandemonium and Shoshanna joining the fun.

First let's clear up some possible confusion:  Something Different, the show coming up that same Wednesday at the Arcata Theater Lounge, has nothing to do with the formerly local jamband with the same name. This Something is the second "multimedia" event hosted by Shea Freelove of FreeLove Circus, with music, dancers, circus acts and onstage interviews. Performers include The Bizarro Band, No Limits Dance Company, The Something Different Dance Squad  and special guest, Arcata Mayor Alex Stillman (who's presumably involved in the interview). FreeLove Circus Ringmaster Unkle Jesse, aka Jesse Jonathon, conductor of SambAmore, leads The Bizarro Band. As Shea explained, "For the finale of the [first] Something Different, the Marching Lumberjacks and SambAmore teamed up for two numbers specially arraigned for the show. Since then the two groups have collaborated and branched out to create something different that the world has never heard or seen before: The Bizarro Band!!!"

This coming Tuesday, April 27, the Jambalaya Blues Jam is hosted by Karen Dumont, who tells us it may be your her last Jam since she's shifting into gospel music. Her plans for a full-time music ministry involve the almost completed Karen Dumont and the Echoes of Glory gospel album, Yahshua. Shout hallelujah!