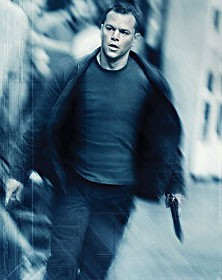 It's the biggest opening weekend in months, and our own Charlie Myers has successfully ducked the onslaught by scampering away to Maryland. You're stuck with an amateur's picks of the flicks. In ascending order of importance:

*Skinwalkers* . The publicity says that "Two sects of werewolves battle one another for control of a half-human/half-werewolf child who has the power to end their curse." Killjoy! Rated R. 110 m. At The Minor.

Daddy Day Camp is the sequel to 2003's Daddy Day Care . Your 13-year-old loved that one; will he/she feel the same at 17? Inept men take over failing summer camp. As a present to mothers forced to sit through the film, it offers eye candy in the form of hunky Cuba Gooding Jr. Rated PG. 89 m. At The Movies and the Fortuna.

Rush Hour 3 — hells yeah, it's on! Chris Tucker and Jackie Chan get wacky in Paris, taking on Chinese organized crime. Oddly enough, they are assisted in these endeavors by none other than Roman Polanski, here playing an uptight flic . Rated PG-13. 88 m. At the Broadway, Mill Creek, Minor and Fortuna.

An adaptation of a Neil Gaiman graphic novel, Stardust tells the magical story of a young man who wends his way across an enchanted landscape to capture a fallen star for his beloved. Some reviewers are comparing it to TheAdventures of Baron Munchausen . Strange cast: Claire Danes, Michelle Pfeiffer, Peter O'Toole, Robert De Niro and Ricky Gervais, among others. Rated PG-13. 128 m. At the Broadway and Mill Creek.

The latest Werner Herzog film, Rescue Dawn , finally touches down in Humboldt County. Savvy reviewers have been so-so on this one, which is essentially a fictionalized version of Herzog's great documentary, Little Dieter Needs To Fly. Christian Bale stars as a German-born U.S. Air Force pilot who busts out of a Vietnamese prison camp and fights his way across the jungle to safety. Rated PG-13. 120 m. At the Broadway.

The great Danny Boyle ( Trainspotting , 28 Days Later ) is back in full force with Sunshine , in which a crew of space commandos sets out on a long mission to jump-start the sun, which is dying. Locked together in close quarters, the crew finds that things go badly. And then, worse. With Cillian Murphy, Rose Byrne and Michelle Yeoh. Rated R. 108 m. At the Broadway.

The July issue of Harper's carried a strikingly beautiful story about the disappearing city of Detroit, which is slowly but surely being reclaimed by the wilderness. "This continent has not seen a transformation like Detroit's since the last days of the Maya," writes Rebecca Solnit. Get a look by attending this weekend's showing of I Pity the Fool , which the Placebo Collective will be showing at The Ink People Center for the Arts (411 12th St., Eureka) on Sunday. I Pity the Fool is a work of urban archaeology that sifts through destroyed Detroit buildings to find clues to the city's rise and fall. Pre-show at 7 p.m., show at 8 p.m. Admission: $5 (plus annual $2 Placebo membership). More information at theplacebo.net.

HOT ROD: Every once in a while I like to watch a dumb comedy. You know, the kind of film where you can turn off your brain and just soak in the stupidity. This movie was originally written for Will Farrell by a writer for South Park, so you know from square one that you're not going to be getting Moliére. I don't have a problem with that per se, but Hot Rod suffers from what I call the SNL syndrome — an inability to understand that motion pictures are very different from short-form television sketch comedy.

Andy Samberg plays Rod Kimball, an overgrown manchild who has his sights set on being the next Evel Knievel to impress his macho stepfather ( Deadwood 's Ian McShane, who's mostly wasted). Samberg hangs out with his idiotic friends and his stepbrother, planning ill-devised and disastrous stunts, all leading to the big jump that could redeem him in the eyes of his stepfather (and we really could care less). His beautiful neighbor, played by Isla Fisher, inexplicably finds his obnoxious antics somehow charming and decides to tag along with Rod's crew. Samberg's mix of innocence, narcissism and anger is something we've seen all too often from his SNL precursors (not just Farrell, but more obviously Adam Sandler, whose limited infantile comic persona Samberg seems to have aped wholesale).

I didn't laugh once, but I did smile twice — once at an absurdly random bit involving Samberg saying "cool beans" in a hip hop scratch style, and once at the antics of Arrested Development 's Will Arnett, who comes close to stealing the movie in his few scenes as Fisher's smug boyfriend. This is pretty slim comedy pickings for a 90-minute movie. I do admit that I may not be the target audience for this one. The only other occupant in the theater, a 14-year-old boy, thought it hilarious, especially the Jackass- style physical gags. Rated PG-13. 88 m. At The Movies, Mill Creek and the Fortuna.

THE BOURNE ULTIMATUM: I was late to the party with the Bourne series. I had always dismissed the Robert Ludlum novels on which the movies are based as leaden thrillers, and initially had no reason to think the movies would be any different. In fact, the films deviate quite substantially from their source material and are surprising in their immediacy and relevance, especially the latest (and supposedly last) entry in the series, The Bourne Ultimatum .

As in the earlier two films, Matt Damon plays Jason Bourne, an amnesiac CIA assassin who is seeking to find out who transformed him into a killing machine with no memory, and to discover his real identity. Director Paul Greengrass, who brought a documentary-like immediacy to the story of the 9/11 hijackings in United 93 (and the previous Bourne installment) knows how to use expert editing and hand-held camera work to ratchet up paranoia and suspense. The film is as globetrotting as any James Bond movie, ranging from Tangiers to Madrid to London to New York, but there's a real-life underpinning that gives the film a certain added frisson that 007 could never match. Secret kidnapping, torture and assassination by U.S. intelligence agencies were once considered mere conspiracy theory (or the stuff of cheap pulp thrillers). Today, waterboarding, Abu Ghraib and Guantanamo are the stuff of the daily news, and the film explicitly references them in a seamless way. The way David Strathairn's coolly malevolent CIA officer (who considers assassination just one more tool to fight the war on terror and cover up his own mistakes) and Joan Allen's more principled intelligence officer conflict within the film asks some big questions about what America's become, all in the middle of a summer action movie. No mean feat.

Damon does a good job of showing the haunted regret Bourne feels for those he's killed, and is a credible action anti-hero. But for those just looking for excitement action have nothing to fear, for this is no preachy bore. There's a nail-biting car chase to end all car chases through the streets of New York City, and the fight scenes are visceral and well staged. This is a rare popcorn movie that'll give you your adrenaline fix and give you something to think about after you leave the movie theater. Rated PG-13. 118 m. At the Broadway, Mill Creek, Minor and Fortuna.

ONCE: The problem with a little movie like this is the temptation to oversell it. It's simply the story of an Irish singer/songwriter (played by Glen Hansard of the band The Frames) who meets a young Czech woman (Mark?©ta Irglov?°). They meet on a Dublin street as he's busking, she asks him about his songs and he offers to fix her vacuum cleaner (his day job is working in his father's vacuum repair shop). It turns out she is a classically trained musician, and they begin a musical collaboration that hovers on the edge of a romance for the length of the film (she has a child and is estranged from her husband). They eventual recruit a Thin Lizzy cover band as their backup, and record Hansard's songs. Hansard and Irglov?° became a real life couple in the course of making the movie, and they have a genuine chemistry that makes the few cheesy music video elements a little easier to overlook (they also co-wrote several of the songs).

Hansard's bandmate John Carney wrote and directed the film, and it has an intimate familiarity with the life of the musician (and the recording studio) that makes the film work, despite its occasional stylistic infelicities. It's a sweet film and it charmed even me, who's pretty resistant to this kind of thing. At its best, it reminded me of Bill Forsyth's early films, such as Gregory's Girl and That Sinking Feeling . I do have one caveat though — if you don't like Hansard's emotive songs, you won't like the movie. They're scattered throughout, and though I like them, even I could have done without hearing one particular tune repeated three times in the course of the film. Rated R. 85 m. At the Minor.

BRATZ. Oh, those adorable Bratz! Four empowered high school girls reject social stereotypes and lead the way to an America that has moved beyond race. Rated PG. 110 m. At The Movies.

HAIRSPRAY. Movie based on Broadway show based on movie. J. Travolta, Q. Latifah, C. Walken reinterpret the John Waters classic, adding singing and dancing and such. Rated PG. 123 m. At the Broadway and Mill Creek.

HARRY POTTER AND THE ORDER OF THE PHOENIX: Rebel rebel — in round five of the series, Harry and the gang buck government orders and found their own secret society, so as to better combat Voldemort, the big baddie. Rated PG-13. 148 m. At the Broadway and Mill Creek.

I KNOW WHO KILLED ME. Vile torture-porn starring L. Lohan and, sadly, J. Ormand. Rated R. 106 m. At The Movies.

I NOW PRONOUNCE YOU CHUCK AND LARRY. Madly-in-love gay couple (A. Sandler, K. James) pretend to be New York City firemen. Or maybe it's the other way around. Rated PG-13. 125 m. At the Broadway, Mill Creek and Fortuna.

LIVE FREE OR DIE HARD: In the latest and perhaps last installment of B. Willis' "Die Hard" franchise, there's a bunch of computer stuff that's gonna asplode the world. Rated PG-13. 130 m. At The Movies.

NO RESERVATIONS. Rated PG. 104 m. At the Broadway and Mill Creek.

RATATOUILLE: Pixar alert! An animated Parisian rat with a preternatural talent in the kitchen dreams of earning his Michelin star. Rated G. 120 m. At The Movies.