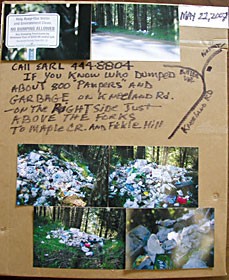 The Kneeland Post Office rests on a tiny scraped-out patch of territory high up the Freshwater-Kneeland Road. It's tucked next to a solidly fenced compound from behind which the skid and squeal of kids playing issued one recent holiday Monday afternoon. The post office itself is a speck of languid past: wood door propped open to the minuscule interior where less than a hundred post office boxes lurk in the dark, and a wood porch with a built-in wood bench against the building's frontside.

At around 2,000 feet elevation, that eave-shaded bench is a handy spot to collapse after riding one's bicycle from the coast. Especially on that particular day -- the summer heat had arrived. Because of the holiday, the post office was closed; next to it a potted tree wilted, waiting on Tuesday. No traffic. Plenty of time to read the literature on the bulletin board.

And, ho, what was this? A handmade poster covered in repugnant photos of a sprawling white heap of wadded-up baby diapers and household trash. A black felt-penned note said to "Call Earl [his number] if you know who dumped about 800 'Pampers' and garbage on Kneeland Rd. ..." A map showed the precise spot.

A closer eyeball of one of the photos revealed that somebody -- Earl, turns out, last name Bootier -- had grabbed a big piece of white cardboard, written "Dirt BAG Diapers" on it, and propped it in the middle of the mess.

Bootier does this sort of thing quite a lot, actually, said Tracy Thomas, PMR ("Postmaster's Relief"), a few days later over the phone as she tended to the tiny P.O. "He lives up here in Kneeland, and he has posted photos of other dumps over the years. And he will post little notes on the piles. Like, I remember one was, 'Piggy piggy pig pig pig.'"

Bootier, by phone, fessed up to his civic inclinations. He's been in Kneeland 22 years, and about seven years ago the proliferation of illegal dumps finally drove him to action. He cleaned many up, with strangers sometimes stopping to help. Then he stoked a fire under the county supervisors, and the county applied for grant money to pay Pacific Lumber Company, whose land most of the Kneeland piles end up on, to do clean up. PL spent nearly $14,000 scouring the area just this past January, according to the county's solid waste program manager Carolyn Hawkins.

But slobs abound, and the illegal dumping resumed.

Bootier had driven past the diaper dump for about two weeks. "I was disgusted, and so was everyone else." It was an eyesore, and a health hazard, with Freshwater Creek not far away. He took photos, then paid a visit to some county offices. An environmental health officer went up the hill to check out the heap, and came back down with enough evidence to gather up a Sheriff's deputy and go knock on a door in Eureka.

Hawkins said a woman in the house "said she knew who did it, and that she would have that person clean it up."

About a week later, a young guy went up the hill and, all day long, shoveled the muck into a truck. Bootier didn't see it, but a neighbor did. "Apparently the kid had plenty of attitude. He looked really pissed off. It had to have been embarrassing."

The case awaits judgment at the county code enforcement office. Bootier figures the kid learned his lesson. But to make it really stick, he hopes the county prosecutes him and, instead of slapping down a fine, makes him "clean up and down Kneeland Road."

"And I'd help him," Bootier said. "I'd join him for half a day or a whole day." Long enough, he said, to ply the fellow with some fatherly advice on common decency, poopy behavior and personal responsibility.