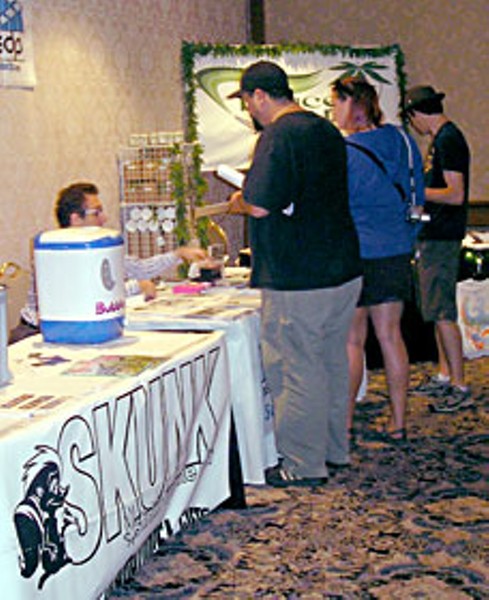 Everyone knows that October is harvest month, and that good food and marijuana abound. The 2007 National NORML Conference was strategically scheduled right smack dab in the middle of this magical time, down in Los Angeles.

For those of you who aren’t hip on weed knowledge, the first thing you must know is that the acronym NORML stands for National Organization for the Reformation of Marijuana Laws. And secondly you should know that NORML is a well-organized, nationwide group that has been fighting for pot-related rights for over 30 years. The group’s three-day conference took place Oct. 12-13 in the tall tower of LA’s Sheraton Universal Hotel.

Now, the Journal reserves its pages for local news, Humboldt County tales if you will, and at this point you’re probably wondering why you’re reading about a gathering of potheads that took place outside of the Redwood Curtain.

Well, dear reader, it turns out that Humboldt contains plenty of folks interested in pot affairs. Who knew?

For example, Humboldt State University has a NORML chapter that you can catch up with at any number of weed-related events about town. The county is also home to a chapter of Americans for Safe Access — that is, safe access to high-quality pot. Even beside those two nameable groups, there are tons of people in Humboldt that are wrapped up in the weed industry in some way, shape or form. Many growers, sellers, activists, recreational users and patients live right here in our haven. Yes, yes — learn something new every day.

Further proof of local interest in such an event lies in the fact that one of our cheap-ass local dailies, the Times-Standard, went so far as to send a reporter down to L.A. to cover the conference. We’ve all seen that weed leaf emblazoned on the Times - Standard’s front page, and, naturally, coverage of a national conference about marijuana law reform is a great opportunity for the paper to throw that leaf on the cover some more.

An event of this magnitude demanded coverage. Not coverage of the conference — coverage of the reporter covering the conference. How would the Times-Standard’s Chris Durant play it in LA? As a straight-laced newsboy wearing out shoe leather to get the story, or as the major-league smokehound we always kind of suspected him to be? The Journal got lucky and just happened to have a willing and able weedy affiliate — yours truly — ready to step into action.

The verdict? Let’s just say that if the Journal hadn’t been in the house, the world-class stoners in attendance would still be wondering what ever happened to the legendary heads of Humboldt County.

Go now — when you’re done reading this, I mean — and check the Times - Standard ’s web site for Chris Durant’s NORML conference coverage. His reports give very thorough documentation of the conference agenda. He covers a few panel discussions in detail, with lots of direct quotes and he has a bit of a description of some of the conference-goers. He even lets us in on the fact that therewas an extra special highlight for the weekend, the High Times Stony Awards Benefit Show.

All of that is fine and dandy. NORML conferences always boast an impressive line-up of speakers — grow experts,doctors, lawyers and full-time fighters of the man. This year was no exception. Vendors, patients who get government bud and victims of weed-related persecution turn out to support the cause. Everyone who’s anyone in the pot world, and their moms, come out for this event. People dress in suits, speak on panels and pay dutiful attention to the fully booked schedule. The same people smoke weed in the hotel’s elevators, hallways and rooms, and have huge sessions (weed-smoking sessions, that is) in the designated cigarette smoking areas outside of the hotel. Business attire is worn by many, but not required.

Amongst this stony crowd, I managed to spot our local weed reporter a few times. My first sighting was in the vendors’ area, where said reporter was rockin’ a Republican Duck Hunters shirt. The Republican Duck Hunters is the name of Durant’s band. Way to represent, dude. Durant was eagerly interviewing vendors and key policy makers, including Kris Krane, a representative from Students for Sensible Drug Policy.

I also caught sight of him leaving the conference luncheon, which takes place on day two. He was chillin’ with the best of them, but dude took off right when the keynote speaker stepped up to the podium.

But that was it. A couple of measly sightings of Durant were all this correspondent could get. Where was he, then? By reading his reports, one can deduce that he was studiously paying attention to the agenda, taking notes on panel discussions and listening to the most important of speakers throughout the event.

In other words, he was everywhere I wasn’t.

Did Durant ever kick it with the crowd of patients medicating at the entrance to the Universal Ballroom? It was hard to miss the whole lot of folks that were smoking copious amounts of weed out on this patio throughout the conference. Certainly, that was a shocking sight for other hotel guests and a welcome sight for marijuana advocates. I was there. Where was the Times-Standard ?

Did he make it to the designated party rooms? NORML rented a conference room on the 4th floor of the hotel for people to meet, mingle and share weed. The room was open for the duration of the conference, and on Saturday the room had live music courtesy of the DJ from Los Marijuanos. The Orange County NORML chapter had an “open room” too, where conference attendees could puff down while taking a break from serious business. High Times magazine had a room on the Sheraton’s 10th floor. Here, one could catch famous folks in the pot world doing what they do best. Authors, growers, photographers and weed personalities bumped elbows and reveled in the success of their gathering. Durant had elsewhere to be, I guess.

Did Durant get to sample weed and weed-related products that were floating around this conference? Some strains passed around at the conference included Lemon Kush, Santa Barbara Garlic, Nevil’s Haze, Bubba Kush, Sour Kush, OG Kush, Banana Kush, Tangerine Kush (my personal conference favorite), Black Domino, Super Silver Haze, Purple Urkel, Sour Diesel, White Widow, Jack Herer and Pot of Gold. Boy, Durant would have been foolish not to sample some of the bountiful weed bouquets.

Let’s hope that Durant tried some pot ice cream or cookies, smoked out of a pipe that lights itself, hit some Volcano bags, smelled and held all kinds of medicinal and recreational strains, passed joints, blunts, bongs and pipes and met some A-list pot celebs. As far as I could tell, though, he was too busy attending policy seminars to make the scene.

Now, just because Durant was not witnessed taking part in these stony activities doesn’t mean he didn’t live up his trip, stoner-style. Homeboy works for a straight-laced paper and he surely gave the paper just what they wanted. Cheers to him for his conference coverage, but let’s hope at some point he represented and puffed tuff for Humboldt County.