Bruce rolls out more winks, one-liners and boom booms in his latest sequel 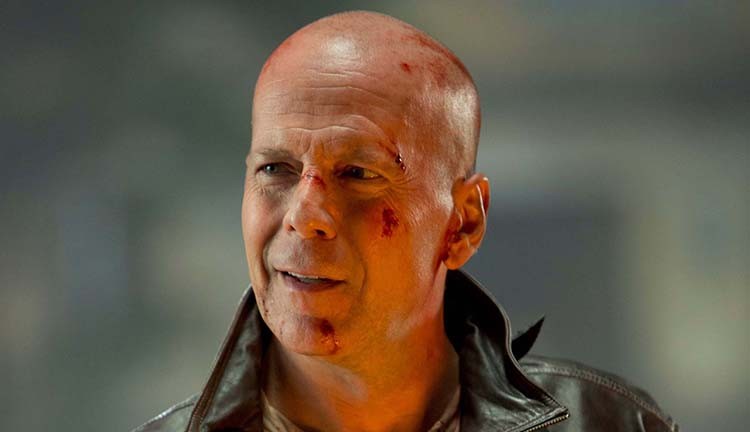 A GOOD DAY TO DIE HARD. There are very few ways a Die Hard film can let you down. When your expectations are so low, there's really nowhere to go but up. The 25-year-old franchise is a comforting diversion at this point, coasting by on gratuitous explosions and groan-worthy one-liners. It is pure, distilled ridiculousness infused with nostalgic reliability. A Good Day to Die Hard is the fifth installment in the series, and as long as Bruce Willis is alive and kicking, it will probably not be the last.

Former NYPD/LAPD officer and general badass John McClane (Willis) travels to Russia in search of his estranged son, Jack McClane (Jai Courtney). John assumes that that Jack's involved with a crime ring, but in reality, his son is a CIA agent trying to take down one of the men responsible for the Chernobyl meltdown.

This is the great thing about the Die Hard films; only this franchise could take Russian stereotypes you haven't seen since the 1980s, film them in Hungary and use a Ukrainian disaster as a centerpiece. Die Hards don't have to be relevant; they just have to be action-packed!

The direction of John Moore (Max Payne) is in no way spectacular, but it's sufficient: Sad faces in close-up for those obligatory emotional scenes, perfectly timed, slow-motion pans of people simultaneously diving and shooting. Skip Woods' script, on the other hand, is subpar even by the lowly standards of a Die Hard film. The line "I'm supposed to be on vacation!" is used three times in 90 minutes. It elicited a facetious chuckle the first time; by the third time it warranted sad trombone noises (wompwompwomp). In his defense, you can't really expect much from a grown man named Skip who also wrote Swordfish.

Tired quips and formulaic plot points aside, A Good Day to Die Hard is as gratuitously entertaining as it is violent. With any luck, the Die Hard franchise will go the way of The Land Before Time, and we'll all be treated to straight-to-DVD sequels for years to come. Hang in there, Bruce Willis; America isn't done with you yet. R. 97m.

ESCAPE FROM PLANET EARTH. Three-D is a gimmick that just will not die. I don't just hate 3D because it requires me to wear glasses over my glasses; my primary issue is that it's usually nothing more than a distraction from what would otherwise be a fairly horrible movie. Like this one, for example. A computer-animated feature centered on a reasonably adorable species of blue aliens, Escape from Planet Earth adheres too closely to formula to succeed as jolly family fun time.

Escape is Cal Bunker's full-length directorial debut, and his greenness shows. The blandly contrived story supplied by Tony Leech and Cory Edwards (Hoodwinked) would have been a major handicap for any director, let alone one as inexperienced as Bunker. Two alien brothers -- one brave and stupid, the other nerdy and timid -- must work together to stop the evil human General Shanker (William Shatner) from destroying every alien planet in the universe. It's sort of Men in Black meets Avatar, minus all the pesky originality and innovation.

There's plenty of slapstick and cartoonery to keep the youngest of children entertained, but there isn't much to appeal to anyone over the age of 5. Don't get me wrong; I appreciate pratfalls and fart jokes as much as any other child trapped in an adult's body, but a person's interest cannot survive on these jokes alone.

Obvious and contrived attempts are made to win the favor of adolescents and adults, but at the screening I attended they were all met with the sound of silent judgment. The cast -- Brendan Fraser (The Mummy), Rob Cordry (The Daily Show), Sarah Jessica Parker (Sex and the City) and Ricky Gervais (The Office, UK) -- was definitely selected with adults in mind. Yet the voices seemed out of place, like they belonged in a much better and funnier movie (excluding Sarah Jessica Parker).

Despite the efforts of planetary explosions, food fights and confetti-filled celebrations, the 3D adds absolutely nothing to this boring film. Had the artwork been more inspired, there would have been at least one entertaining aspect to the film. Pixar and DreamWorks have set the bar pretty high when it comes to quality CG family films. The weak efforts behind Escape from Planet Earth fail to reach this bar by several astronomical units. PG. 99m.

SNITCH. Bull-sized human Dwayne "I'm not The Rock anymore" Johnson stars in this action-thriller as a man named John Matthews (not to be confused with the local KSLG deejay, though the resemblance is uncanny), who goes undercover with the DEA in order to save his son. PG13. 112m.

DARK SKIES. You know this movie: An attractive suburban family witnesses an escalating series of disturbing events. Oh my! What's happening? Is it a) some malevolent supernatural force loosed from the bowels of hell, or b) something else -- maybe Ashton Kutcher playing a prank? PG13. 95m.

QUARTET. A freshman director by the name of Dustin Hoffman (sounds familiar) helms this stately dramedy, which takes place in a home for retired chamber musicians. Trouble arrives in the form of Jean (Maggie Smith), a septuagenarian diva who once sang in three other residents' quartet. PG13. 98m.

Grease is the word! The original high school musical (1978), starring John Travolta and Olivia Newton-John, plays Friday at 8 p.m. at the Arcata Playhouse. What, free ain't good enough for ya? Well, get this: Come dressed as your favorite greaser and you get a free root beer float! Bitchin.

On Friday, the Arcata Theatre Lounge is showing two documentaries guaranteed to make you wince: Waiting for Lightning is a skateboarding doc about a crazy guy named Danny Way who tested the abuse-limits of the human body by trying to jump over the Great Wall of China (wait for it) on his skateboard. The Birth of Big Air follows a similar (suicidal) trajectory, following BMX legend Matt Hoffman's attempt to jump as high as possible, ideally (but not always) without rupturing his internal organs. This is a fundraiser for Arcata's RampArt Indoor Skatepark, so teens, don't bring your parents or they may never let you on a ramp again. Saturday enjoy the awkward bumbling of The 40-Year-Old Virgin (2005). R. 116m. 8 p.m. Sunday it's Pixar's whimsical 2009 family adventure Up. PG. 96m. 6 p.m. And next Wednesday, Sci-Fi Pint and Pizza Night plugs back into the mainframe with The Matrix Reloaded (2003). R. 138m. 6:45 p.m.

BEAUTIFUL CREATURES. In this coming-of-age Twilight imitator, star-crossed teenagers have to deal with the added burden of being witches and warlocks. PG13. 124m.

DJANGO UNCHAINED. Quentin Tarantino's Blaxploitation western about an avenging slave in the antebellum South is the most audacious and entertaining film of the year. R. 165m.

HYDE PARK ON HUDSON. It's a slightly awkward weekend when FDR (Bill Murray) plays host to the King and Queen of England, while carrying on with his mistress (Laura Linney). R. 94m.

SAFE HAVEN. Another treacly adaptation of a Nicholas Sparks romance novel (see A Walk to Remember, The Lucky One). This one stars Julianne Hough and Josh Duhamel. PG13. 113m.

WARM BODIES. Teen rom-com based on the Bard's Romeo and Juliet-- with zombies. Nicholas Hoult and Teresa Palmer are R and Julie, the star-crossed lovers. PG13. 97m.