Eaarth: Making a Life on a Tough New Planet 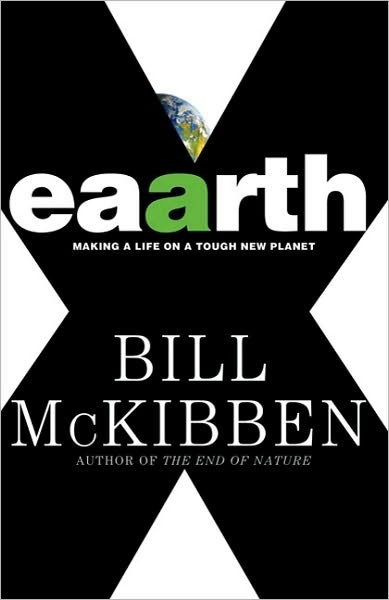 The planet Earth as it was when those famous photos were taken from the moon, doesn't exist anymore. It has begun devastating changes, and it's not changing back for thousands of years.

It's so different that Bill McKibben gives it a new name. He calls it Eaarth. "... it won't be anything like the planet we've known. We're hard at work transforming it -- hard at work sabotaging its biology, draining its diversity, affecting every other kind of life that we were born onto this planet with. We're running Genesis backward, de-creating."

McKibben wrote one of the first books about the climate crisis (The End of Nature) and has been the foremost non-scientist (and non-Al Gore) writer and speaker on the subject. He uses only about a quarter of this book to describe the current situation and dreadful trend lines, and another quarter explaining the inadequacy of the proposed responses to the climate crisis, and the extreme unlikelihood that large-scale changes in policy, energy generation etc. can be made in time to head off very major changes in how human life on this planet is to be lived. "And if our societies start to tank, we'll be in worse shape than those who came before. For one thing, our crisis is global, so there's no place to flee. For another, most of us don't know how to do very much -- in your standard collapse scenario, it's nice to know how to grow wheat."

He comes right up against the doomsday scenarios, but turns away: "The rest of this book will be devoted to another possibility -- that we might choose instead to try to manage our descent. That we might aim for a relatively graceful decline." [Emphasis is his.]

The second half of the book describes local and small-scale changes that nevertheless produce a very different society --living "lightly, carefully, gracefully." This isn't intended as a utopian dream; this is survival. Locally generated clean power, focus on maintenance instead of growth, no more consumer culture or the world it represents. But because small communities as self-sufficient as possible are likely to get stifling without contact, novelty and diversity, "if I had my finger on the switch, I'd keep the juice flowing to the Internet even if I had to turn off everything else."

This book should be of special interest here on the North Coast, where lots of people are interested and involved in local solutions and practical change. Still, even though it's important and even indispensable, I don't think it's sufficient on its own. There are a few other pieces to the puzzle of facing the coming changes covered in other books -- and subjects of future reviews.