Early, Early Man in the Americas? 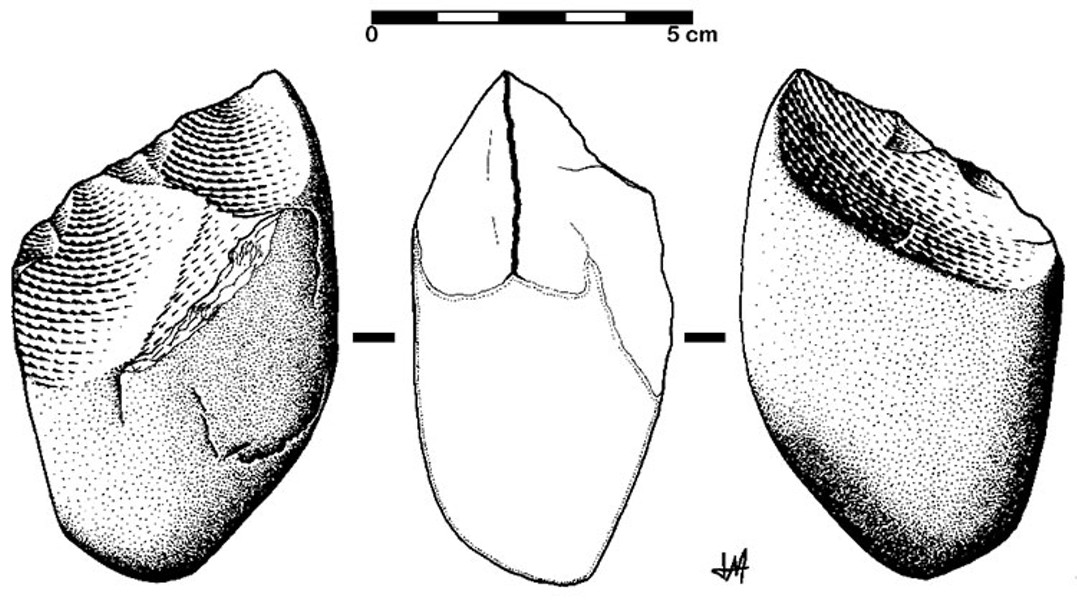 José-Manuel Álvarez, Creative Commons license None of the Calico or Cerutti "tools" showed anything like the degree of sophistication seen in this stone chopper from Duero Valley, Spain.

Christmas some 30 years ago saw a half-dozen of us curious rubberneckers tramping over the so-called "Calico Early Man Site," located half an hour east of Barstow, California. How early? At least 100,000 years, according to none other than the late Louis Leakey, who investigated the site starting in 1963, at the behest of Californian archaeologist Ruth Simpson. Since conventional wisdom has the peopling of the Americas starting around 15,000 years ago (see Field Notes, June 14, 2012) we were pretty skeptical. One of our number, a geologist, couldn't believe that Leakey — the same paleoanthropologist who did so much to confirm our African ancestry based on finds in Tanzania — had championed the site. Today, it barely rates a footnote in the story of how humans first came to the New World.

I was reminded of our Calico visit when reading recent reports of possible artifacts found outside San Diego on State Route 54, at what's known as the Cerutti mastodon site. About 15 years ago, five large cobblestones — maybe, maybe not, artificially shaped — were found at the site alongside a mastodon skeleton. Two of the "tools" — assuming they're man-made artifacts — are anvils and three are hammers, used perhaps to bash the mastodon bones to get at nutritious marrow inside. The bones can't be dated by standard radiocarbon techniques since no organic matter remains. Five years ago, though, paleontologists were able to tease dates from the bones using a dating method in which the radioactive decay of uranium is compared to its daughter element, thorium. Long story short: the mastodon died about 130,000 years ago, meaning that if those cobbles found with the skeleton really are tools, we're going to have to completely revise the early history of the Americas.

Which brings us back to the Calico "tools." How do you differentiate a genuine stone artifact — a man-made tool — from a rock that's been tossed around by natural geologic forces for 100,000 years or so? In the case of early-man sites in Africa, for instance, the evidence is pretty obvious. Thousands of 3-million-year-old tools from the Olduvai Gorge in Tanzania clearly show an artificial origin, in that they were created by striking river pebbles with round hammer stones to make sharp edges and tips. Researchers have been able to reproduce such tools with, presumably, the same techniques used by rapidly-evolving hominids millions of years ago. See the accompanying graphic for an example of obvious artificiality.

With Calico, and now the Cerutti mastodon site, the evidence is controversial and, again, one person's artificial tool is another's rock. What's needed for the rewriting of American prehistory, of course, is an actual human skeleton — or part of one — dated to way-back-when. And not necessarily one of "ours" — our "Homo sapiens sapiens" line is one of several hominin species including Neanderthal, Denisovan (a recently discovered Siberian sister group) and Erectus, the one from which we evolved. All these had died out by around 30,000 years ago, but if there were very early hominin settlers in the Americas, they may well have been of such ilk.

For now, though, conventional wisdom holds until new evidence is dug up. The ancestors of all Native Americans arrived here no earlier than about 15,000 years ago.

Barry Evans (barryevans9@yahoo.com) never saw an archaeological site, controversial or not, that he didn't love.