Earthrise: How We First Saw Ourselves 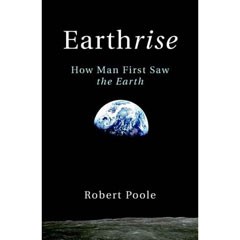 On Christmas Eve 40 years ago, Frank Borman looked out the window and saw something no human had ever seen before. He saw the Earth rise.

At the time Borman was in a space capsule, with the first crew to orbit the Moon. They were on the dark side, in their fourth orbit of looking down at shades of gray on the lunar surface, set against the black of space. And then suddenly, the blue and white Earth dawned over the Moon's edge. Apollo 8 astronauts Borman, James Lovell and Bill Anders scrambled to take pictures through the small window with their hand-held camera. One of those photos became the iconic image dubbed "Earthrise," splashed across magazine pages and posterized on classroom and dorm room walls all over the world.

But later it was that first view of Earthrise that these astronauts remembered most clearly: The Earth in the context of space, the whole Earth with all the visible color and life in one fragile body.

This smart and exciting little book sets the historical context for this photo, and is especially fascinating about the almost forgotten Apollo program. Its spaceflights lasted a mere four years (1968 to 1972): 11 missions, nine voyages to the Moon and six moon landings. While Neil Armstrong's first step on the Moon in Apollo 11 is the soundbite moment, Apollo 8 was the most significant and the most awe-inspiring at the time. No manned spacecraft had ever left Earth orbit, traveled that far into space, or spun around the Moon. A number of complex technical achievements had never been tried before, requiring split-second timing: all with an on-board computer that was "tiny in comparison with modern pocket calculators." The details of this mission are astounding, and full of amazing ironies.

This book is rich in the relationship between past and contemporary imagination and the realities of these missions. Poole rightly reminds us that the Earthrise photo gave evidence and impetus to holistic thinking and the ecology movement that blossomed in that period, leading to a certain credibility for some sense of Gaia: the planet as an interdependent organism. That this was not Apollo's purpose makes it all the more powerful. This book is (Poole writes) "the story of how the mightiest shot in the Cold War turned into the twentieth century's ultimate utopian moment." He suggests how, almost invisibly to us today, this has become a lasting legacy.