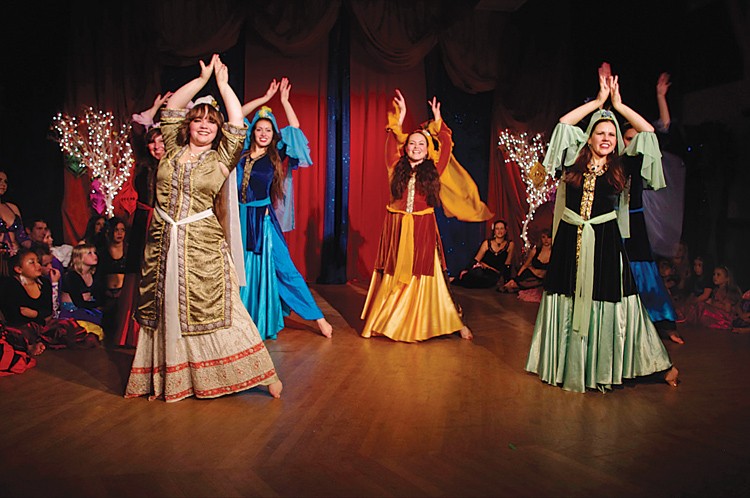 Catch that whiff of chestnuts roasting? Recurring visions of sugar plums? Feel a tug toward childhood? As the early darkness descends, the world tilts toward the stars and we begin planning festivities to mark the year's end. Humboldt County -- home to a classical Nutcracker Ballet in its Victorian era splendor, along with original takes on Yule-time tales─ overflows with holiday dance performances that whisk us into the spirit of the season.

The size of some of these productions and audiences is noteworthy for our sparsely populated region. Enormous casts of all ages appear onstage and sold-out theaters fill with doting relatives, the December dance crowd (often revisiting their own childhood traditions), and the regular dance audience.

First up, Ferndale Dance Academy presents Ease on Down the Road, an adaption of the Wizard of Oz, at the historic Winema Theater in Scotia on the evening of Saturday, Dec 1. Written and directed by academy alumna Kelsey Snyder, who also studied with City Ballet of San Diego, this work is choreographed to give the youngest students, ages 6 to 13, a chance to perform in leading roles. The hamlet of Ferndale harbors a gem in this studio and its director Laura East, who studied with the Joffrey Ballet and believes in giving her students classical ballet training to underlie their studies in jazz, tap or hip-hop. The disciplined vocabulary pays off in the compelling dancers East sends out from the wings. The entire cast of her spring concert, from the littlest primas on up to the principals, was remarkably performance savvy. Her events are known for telling stories in dance, making for a fun kids' show -- at 45 minutes long, perfect entertainment even for pre-schoolers.

Ferndale Dance Academy presents Ease on Down the Road, Saturday, Dec. 1, at 7 p.m. at the Winema Theatre in Scotia. General admission is $10. Children 4 and under are free. Tickets can be purchased at the door starting at 30 minutes before show time.

Erin McKeever and the work that comes out of her Trillium Dance Studios have been steadily growing in artistic depth and clarity. McKeever and her faculty of accomplished dance artists have the knack of turning a studio school dance recital into a gala event. In a wise move, rather than stage yet another Nutcracker, she created her own Christmas holiday concert, ‘Twas the Night Before Christmas, which returns Saturday, Dec. 8, and Sunday, Dec. 9, at the Eureka High Auditorium. Annual concertgoers take note of this venue change from the Van Duzer; McKeever has been telling the kids, "We're going on tour."

Be sure to look for the Bellerinas, easy to recognize in their bell shaped dresses, dancing in waves to Carol of the Bells, and a mini samba parade of glittery gold Christmas lights among the cast of over 200 elves, reindeer, dancing ornaments, teddy bears, jack-in-the-boxes and pirates -- yes pirates!  Taking off where the timeless Clement C. Moore poem ends, the second act pits the dashing pirate king and his band of thieves against all the magical creatures come to life after hours beneath the towering Christmas tree. It's reminiscent of Peter Pan and the Lost Boys, but this time the pirate wins the ballerina doll and the orphans gain a family. Corny, maybe, but in a way that taps into your heart and takes you to a simple place where love and kindness triumph.  Along with the children's performances, Trillium Dance Ensemble, made up of faculty and advanced students, and a new junior ensemble, will perform in contemporary and pointe pieces.

In its second year, Shoshanna's wondrous Nutcracker: Arabian Nights! is surely on the way to becoming another unique Humboldt holiday tradition. Featuring the Ya Habibi Dance Company, the dynamic Humboldt Rockers and legions of Shoshanna's students, this re-imagining of the familiar holiday ballet includes much of the diverse, local belly dance community and guest artists from out of the area.

This Arabian night begins with a covey of silk-clad, little girl dancers in a take on the classic party scene that opens the Nutcracker and the enchanted powers that send Clara and the Prince (Ciara Cheli-Colando and Brian Smith) into a land where visions of Turkish delight abound. The entertainment is fit for a sultan and a sultana. The battle scene between the rats (led by the rat queen) and the tin soldiers is being danced by Deeta and Modern Gypsy, an Oriental style belly dance troupe from Redding and the Humboldt Rockers, who combine break dancing with Tahtee, an Egyptian martial art form with sticks. (It was so cool last year.)

This performance is all about the magic of childhood and the joy that comes from being a devotee to the art of dance. Nutcracker: Arabian Nights,  Redwood Raks, in the Old Creamery Building, at Eighth and L streets, Arcata, Saturday, Dec. 8, 2 p.m. and 7 p.m. and Sunday, Dec. 9, 2 p.m. Redwood Raks is a small venue, so reservations are suggested. For more information call (707) 616-6876 or go to www.redwoodraks.com.

In December all roads lead to The Nutcracker -- old school -- danced to the original Tchaikovsky score, and in our corner of the world performed by North Coast Dance under the artistic direction of Danny Furlong. This year's series of performances begins on Friday, Dec. 14, running through Wednesday, Dec. 18. The Nutcracker probably has been done more times than any ballet in history and there is only so much innovation a choreographer can introduce when mounting a traditional version. Beyond the story of Clara and the prince and the rat king, it is the performances that make the whole shebang click or not.

Furlong is known for his sharp eye in bringing stellar talent from the Bay Area to fill some of the principal roles, along with coaxing big performances from his company members, apprentices and younger students. The Nutcracker is really one big party with its own hierarchy, with dancers advancing year by year to more challenging roles. This year all bets are on instructor Nancy Call's Level Five ballet students, who are one notch away from apprenticeship in the company. In the spring, these pre-teens, still new to pointe work, were lovely in the Fairy Variations, from the Sleeping Beauty Ballet. It is an exquisite moment in a young ballerina's life, when the grace and strength of approaching womanhood is so delicate yet ardently expressed. Should be dazzling. North Coast Dance presents the Nutcracker at The Arkley Center for the Performing Arts, 412 G St., Eureka. On Friday, Dec. 14, the ticket includes an opening night reception at 6:30 p.m. followed by the performance at 8 p.m. Saturday, Dec. 15, is a special 4 p.m. matinee, with cookies and a chance to meet the cast. Performances continue on Sunday, Dec. 16, with a 2 p.m. matinee, and on Tuesday, Dec. 18, and Wednesday, Dec. 19, at 7 p.m. Adults $20, children $12. For tickets call (707) 442-1956 or go to www. arkleycenter.com.

The Saturday before Christmas the Trinity Ballet Academy of McKinleyville returns with its seasonal show, A Christmas Star, at the Eureka High Auditorium. Academy director Greta Leverett has been producing Christmas ballets in Humboldt County since 2000, after a career in Los Angeles, where she performed with the Anaheim Ballet.  A Christmas Star weaves together variations from the Nutcracker with Leverett's own Dances of Noel into an original story about a young girl's dreams that harken back to the first Christmas. It's a warm way to celebrate the dark days of winter. Trinity Ballet Academy presents A Christmas Star, Saturday, Dec, 22, at 3 p.m. at the Eureka High Auditorium, 1915 J Street. Call the studio at 839-1816 for information about purchasing tickets. Tickets, also, available at the door the day of the show, doors open at 2:30 p.m.