College of the Redwoods has never been closer to losing accreditation 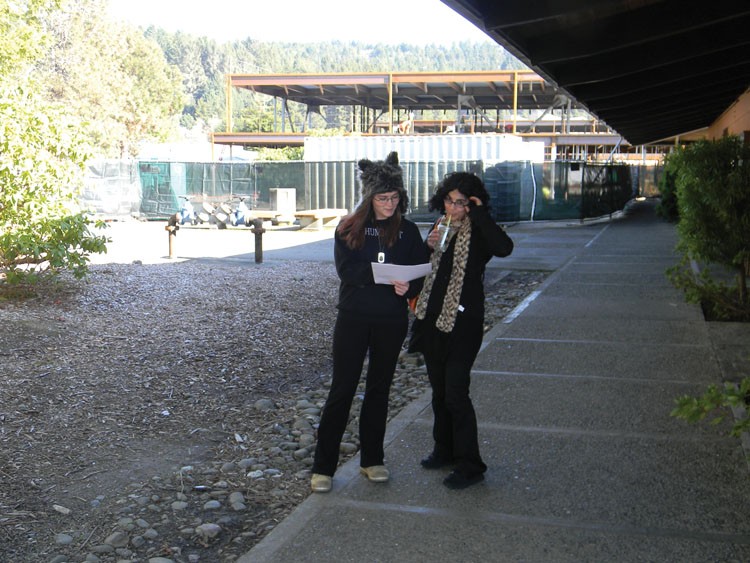 "We are here to stay." That was the firm assurance given last week by College of the Redwoods Interim President Dr. Utpal Goswami. A composed Indian expat with salt-and-pepper hair, a trim moustache and a clipped, lilting accent, Goswami was speaking to an audience of about 50 in the wood-shingled Forum Theater on CR's main campus, seven miles south of Eureka. It was a job interview, of sorts. Goswami is one of three finalists for the position of president/superintendent of CR, the North Coast's only community college, with campuses from Crescent City to Fort Bragg. CR is now one step away from losing accreditation -- a step that won't be taken, Goswami promised, repeating his declaration: "We are here to stay."

Even with that vote of confidence, there's plenty of cause for concern at CR these days. Earlier this month the 48-year-old college was notified that it had been placed on "show cause" status by the Accrediting Commission for Community and Junior Colleges. This means that CR will have to submit a report to the commission by Oct. 15 explaining why accreditation should not be withdrawn. If that report and a subsequent visit by an evaluation team prove unconvincing, CR will lose accreditation in January of next year.

What then? Well, then chaos would ensue. Class credits from CR would no longer be transferable to four-year universities; attendance would plummet; government funding would evaporate. It would be the doomsday scenario, and for a college that serves more than 9,000 students across a district the size of Maryland, the fallout would be devastating.

Problems at CR run deep and, in some cases, date back many years. But administrators and educators are quick to point out that the deficiencies identified by the accrediting commission lie in planning, assessment and communication, not in the quality of education provided to students.

CR was placed on accreditation warning status in 2006 for its inadequate response to commission recommendations dating back to 1999. In 2007 the warning status was downgraded to "academic probation." Faculty, staff and administrators took the sanctions seriously and worked hard to improve inter-department communication, develop clear goals and document progress toward those goals.

"We were on a pretty good path in 2007, 2008," said John Johnston, an English professor and president of the College of the Redwoods Faculty Organization. CR was taken off probation in July 2008, and the president of the accrediting commission was impressed. She said CR had "given other colleges a model for how quickly and how well they can turn 180 degrees."

But CR soon backslid during what Johnston called "the Marsee debacle." Former President/Superintendent Jeff Marsee, who was hired just days before CR was taken off probation, has widely been blamed for irresponsible leadership characterized by overspending and a vindictive, dictatorial management style. "We were warned by the people at his previous college that he would probably try to break what we had and then rebuild it to his own liking," Johnston said. "Unfortunately, when he broke it he never rebuilt it." Marsee resigned last March to become president of Stockton's San Joaquin Delta College, where he has since been placed on administrative leave after receiving "no confidence" votes from faculty and staff.

The accrediting commission sent another team to CR last October, and by the time the team left, Goswami and other administrators felt good about the direction of the college. They were encouraged by the exit interview with the team, especially after they read its evaluation report. It said the evaluators had been "fully prepared to find a college which had made little progress on the issues identified in previous accreditation visits" but instead found CR to be "in transition to a new era that would address each and every one of these issues."

Maybe. A close read of the entire report reveals a more mixed assessment. Team members worried that the positive changes were "potentially transitory," and they identified several commission standards that weren't being met. For example, the college wasn't articulating big-picture objectives in measurable terms or documenting student learning well enough, and the Board of Trustees hadn't held Marsee accountable.

Back in the Forum Theater, Goswami told his audience that finger-pointing was pointless. "This is not the time to figure out who did what or who didn't do what. This is the time to focus purposefully and deliberately on the things we have to do to get through the next eight or nine months." Since October, he said, the college has continued to improve its practices. Of the seven recommendations made by the accrediting team, Goswami said only two remain unfulfilled: full assessment of student learning outcomes and comprehensive, integrated planning that spans across college departments. He's confident that CR can rectify those in time for the October report to the accrediting commission.

Adding to CR's woes, education funding has been dwindling fast, and the college is currently out of compliance with the state's 50 percent law, which requires community colleges to spend at least half their revenue on academics, as opposed, for example, to building new facilities or creating a top-heavy administrative structure. (Marsee did both.) CR lost nearly half a million dollars last year due to trigger cuts in the state budget, and it will lose another $1.7 million if the governor's tax initiative doesn't pass in November. Last month, the Board of Trustees notified faculty and staff that layoffs may be necessary.

The hunt for a new president has been narrowed to three candidates -- Goswami, Mendocino College President Kathryn Lehner and Pierce College Puyallup (Washington) President Dr. Patrick Schmitt. The Board of Trustees intends to select the permanent president by its March 14 meeting.

While Goswami was addressing a theater scattered with people concerned for CR's future, 17-year-old Amy Ward, a senior at Fortuna's East High, was walking through the college corridors with a campus map in hand. She's hoping to enroll at CR in the fall.

"I'm really drawn to this place, partly because I heard they have really great classes," Ward said. She also likes the campus and the region, and she appreciates CR's cheap tuition. Ward hadn't heard about the school's accreditation problems, and when she did she wasn't too worried. "It's such a good program here and they help so many people that they'll probably get back" out of sanctions, she said.

One condition of being placed on "show cause" status is that the school must submit a plan for the orderly shut-down of the institution. CR will submit a closure plan as required, but Goswami insisted that it's just a formality; it won't actually happen. Since the accrediting commission was formed in 1962 only one college has lost accreditation -- Compton Community College in 2006, and that campus immediately transitioned into a learning center for the neighboring El Camino Community College.

"CR is so important to this area that we have no other choice," Goswami said. "We have to make this institution the asset that the community believes it is."