Tony Machado at the Morris Graves Museum of Art 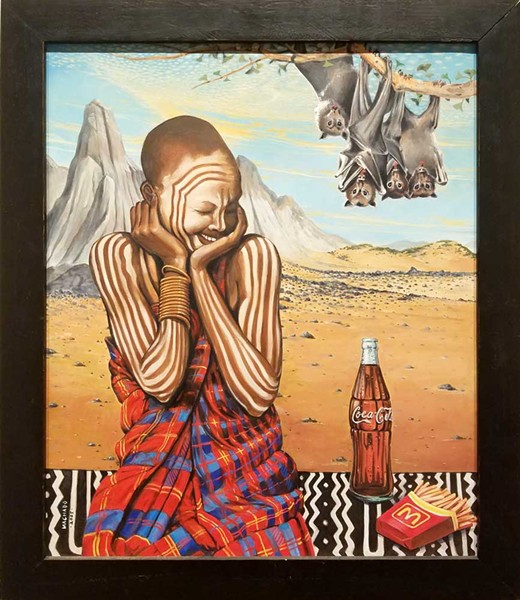 Photo by Gabrielle Gopinath "Burger and Fries" by Anthony Machado. 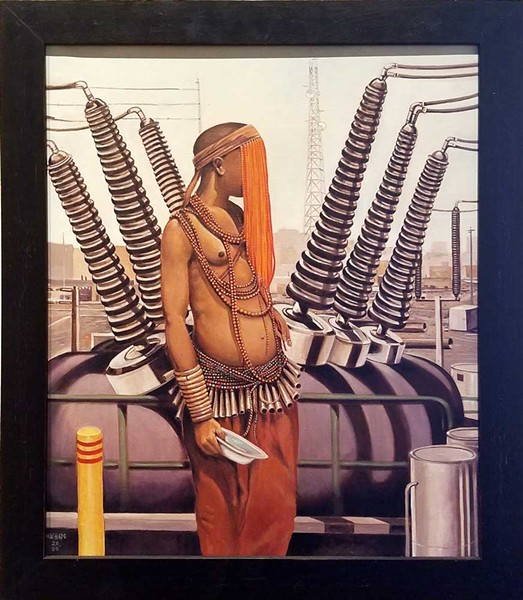 In paintings by Anthony "Tony" Machado, people, objects and images from global cultures collide. A young African woman dressed in traditional robes and jewelry stands expressionless in the foreground of one work while a trio of African drummers play. Someone in a furry costume patched in from a different photographic source dances ecstatically nearby. Meanwhile, the cone-hatted clown mascot from a well-known fast food chain flashes a miniature reproduction of his own smiling likeness, emblazoned on a discount card that could save you money on burgers, tacos and teriyaki bowls. Villagers dance in the middle distance. Oil derricks and a multi-story luxury hotel dominate the sunset sky. Pool balls float surrealistically among the clouds. Dislocations proliferate because culture now is global, with money and goods and information and airplane-loads of passengers flowing ceaselessly past borders, all of us drunk on the same myths, enthralled by the reservoir of media we share in common.

El Maestro en Reposo (The Master in Repose) presents paintings by Oakland native and sometime Eureka resident Machado, who was born in 1954 and died earlier this year. The artist is well known for the murals he painted in San Francisco's Mission District in the 1970s and 1990s. He and frequent collaborator Michael Rios completed a major work for the city's then-new 24th Street BART Station in 1975. The duo's "Homage to Siqueiros," a celebration of the great Mexican realist painter and Marxist-Leninist revolutionary painted with Richard Montez the previous year, can still be seen inside the Bank of America building at 23rd and Mission streets. This exhibition focuses on the oil paintings that increasingly occupied the artist's time in his later years.

Machado's compositional technique relied on collage — much like that of James Rosenquist and other major postwar painters who transitioned to easel painting after working billboard size. He constructed mashups of people, places and things from different sources and rendered the result in meticulously detailed oils, always preserving the images' alienation from one another in the finished work. Sometimes it's the palette that separates the images. In one untitled painting, a black woman dressed grandly in traditional African regalia looms into the foreground of a misty beachfront scene, her form saturated with hot color while the landscape is rendered in delicate lavenders and grays.

A pair of small companion pieces in wide, gilded frames depict hood ornaments on classic cars — even within that narrow category the artist's selection has zip and sting. The juxtaposition of Ford's streamlined greyhound alongside the "Indian head" hood ornament used by Pontiac in the 1930s — a Native American warrior's head sculpted in chrome and styled to look like a futurist beacon — remains arresting.

While his execution can recall the dry, detail-intensive style of Salvador Dalí, Machado is less a surrealist than a connoisseur of dislocation. The pop vignettes he paints are lurid and familiar at the same time, and his collage-derived compositions model the disruptions built into contemporary life. The results will be familiar to anyone who has entered a gas station, watched TV, surfed the internet, gambled at a casino or shopped at a big-box store in recent years.

Smaller figure studies are like snapshots of the southern hemisphere made by an enthused world traveler and filtered through Hollywood effects. There are boldly painted African women, gorgeously dressed Bedouins on camels and robed Tibetan monks. A Bollywood goddess gazes serenely from a movie poster. A Plains Indian straddles a tractor. A indigenous Mesoamerican poses with colorful macaw-feather ornaments in his pierced nose. A tan young woman comes striding out of the ocean like Aphrodite, smiling, the zipper of her cutoff shorts already peeling open.

What these vignettes don't include is also striking: I mean the omnipresence of brown and black people, and the near-total absence of obviously European or American views. The artist's curiosity is bent on those parts of the world that have historically been underprivileged and unrepresented. The aura of awesomeness he invests them with is a welcome change from the tenor of mainstream representations in the age of Trump, even as it repeatedly segues into fantasy.

Machado's paintings, placed at intervals around the graciously proportioned space, surround a display of T-shirts screen printed with fluorescent overlapping images, dating from a period when the artist was working in Oakland as a designer for musician clients including Carlos Santana. A few small objects rest beside one mannequin's torso, placed there in roadside memorial tradition, as tributes to the master: four cigars and three pocket-size bottles of Underberg herbal bitters.

Tony Machado: El Maestro en Reposo will be on view at the Morris Graves Museum of Art through Oct. 28. Visit www.humboldtarts.org for details.