Visualizing the results of the Nov. 4 election 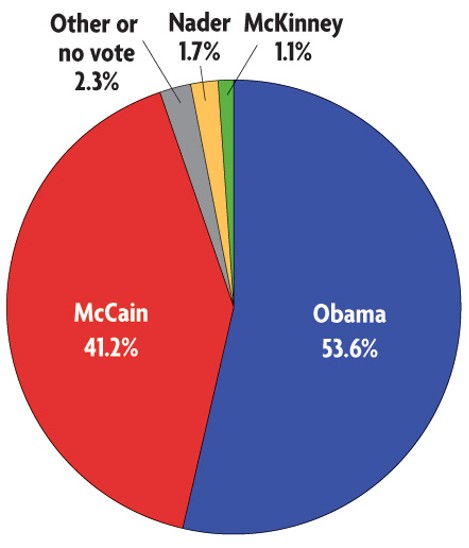 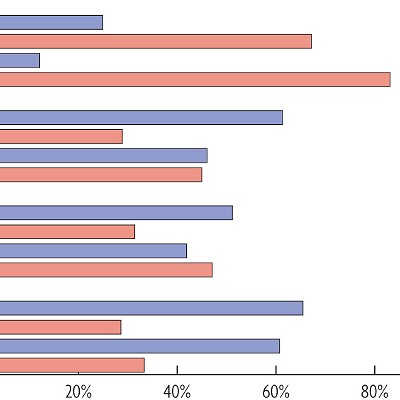 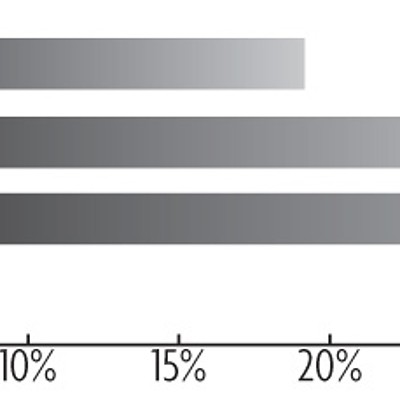 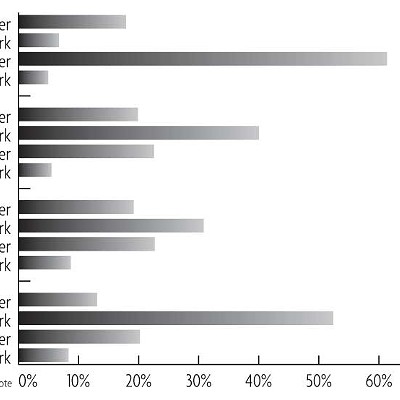 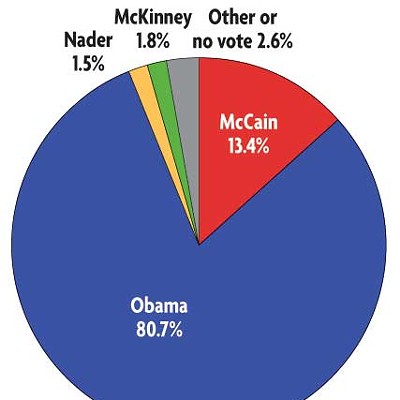 For California voters, the two biggest races in the Nov. 4 election were the presidential race and Proposition 8, a state constitutional amendment banning same-sex marriage. Humboldt County voters voted similarly in each of the two races -- they chose Barack Obama over John McCain, 62 percent to 34 percent; they voted no on Prop. 8 60 percent to 40 percent. (See "Map Gallery" below.)

But comparing the Prop. 8 maps on the cover of this issue with the presidential maps inside, we see several regional differences in the vote. Hoopa voted fairly strongly for Obama, yet also voted yes on 8. Two Fortuna precincts voted for Obama, but all of Fortuna voted yes on 8. So did Loleta, several precincts on the Eureka outskirts, and part of McKinleyville.

More such maps follow. We are supplementing the maps with information garnered by the first-of-its kind Humboldt Transparency Project. The project's primary purpose is to provide a check on "black box" voting, in which an inordinant amount of trust is placed in closed-source software and machinery. The project has been as smashing success, uncovering a serious software flaw on its first full run-through. (See this week's "Town Dandy.") However, making ballots open to the public has a side-effect; it gives us an immense opportunity to look deeply into the mind of the electorate, probing its psyche in ways that have never before been possible. We take a quick first pass at this in the following charts and graphs that follow.

A note: The maps herein are drawn from Humboldt County's officially certified election results, with the following exception. Because of the counting flaw in Diebold software uncovered by the Transparency Project, results from precinct 1E-45 have been updated with data provided by the project. (See this week's "Town Dandy.") Unfortunately, by press time we were only able to update results pertaining to candidates in local, state and national elections; state and local ballot initiatives have not been updated. The charts and graphs, however, are made with data from the Transparency Project. With the exception of precinct 1E-45, the two sets of numbers are very close -- less of a tenth of a percentage point in every case we've examined.

The three-way race for Second District Supervisor was probably the hardest-fought local competition in this election cycle, as well as the county's most unusual. The death of incumbent Roger Rodoni in an automobile accident shortly before the June primary plunged the race into chaos. Rodoni's name stayed on the ticket, along with challengers Clif Clendenen and Estelle Fennell. He finished first, with Clendenen a close second. At the time, the unusual circumstances of the race seemed to indicate that Clendenen and Fennell would compete head-to-head in a runoff.

However, it was determined that Johanna Rodoni, who had been appointed to finish out her late husband's term, had the legal right to run as a write-in candidate in the November election. Fennell and Clendenen would appear on the ballot. Clendenen ended up finishing first, with 37.9 percent of the Second District vote. (Four and a half percent of district voters didn't cast a ballot in the race.)

On the first maps in this series -- a district-wide map and an inset of the City of Fortuna -- Clendenen appears in yellow, Rodoni in red and Fennell in blue. The shade represents the high vote-getter's margin of victory against the second-place finisher in each precinct. It shows Clendenen maintaining a comfortable margin in most of heavily populated Fortuna (his hometown), with Rodoni taking the middle section of the district and Fennell running very strong in sparsely populated SoHum. (For Rodoni, we are counting the total of all write-in votes, virtually all of which were cast for her.)

In the second set, we show the candidate's areas of improvement since June. (For Rodoni, we are comparing her performance with her late husband's.) Blue is up, red is down, and the scale goes up to 10 percentage points. So if a candidate won went from a 20 percent finish in June to a 30 percent finish in November, the map is colored solid blue. If a candidate went from 30 percent to 20 percent, the map is colored solid red.

They show that Clendenen improved his performance nearly everywhere in the district, and that Rodoni was not able to mobilize her husband's constituency to write in her name instead. Fennell improved in Fortuna and environs, but not enough to actually win any precincts.

Fennell's campaign had been hoping that a strong Obama turnout in the general election would carry their candidate to victory. Fennell was the only Democrat in the race, and had been endorsed by the Humboldt County Democratic Central Committee. The hope, though, was misplaced. These charts, made with data from the Transparency Project, show that although Obama did win handily in the Second District, Obama voters were slightly more likely to vote for Clendenen.

Politically speaking, Eureka has long been Humboldt County's most divided and interesting city. (See "City Asunder," Oct. 26, 2006.) On national and state issues, the town currently swings solidly Democratic, as our maps for the presidential race and Proposition 8 show. (Obama beat McCain 62-33 in the city.) At the local level, though, things can get unpredictable.

The City Council race this time was conducted at a far softer decibel level than in recent years. In 2004, a pitched battle between incumbent Chris Kerrigan and challenger Rex Bohn resulted in a nasty, mysterious, expensive last-minute hit campaign against Kerrigan by a shadowy group calling itself the Eureka Coalition for Jobs. Kerrigan won handily -- a victory for the left. In 2006, a slate of left-leaning insurgents attempted to get three seats on the Council, but ended with only one victory (current Councilmember Larry Glass). Overall, a win for the right.

This time around candidates Linda Atkins and George Clark ran a slate campaign, again from the left. Late in the election, their opponents, Frank Jager and Polly Endert, likewise combined forces with joint mailers. Strangely, though, the two races ended up with wildly different results. Jager won a large mandate (57.8 of voters, versus Clark's 34.4). Atkins garnered a smaller but still conclusive victory against Endert (48.5 percent to 41.9 percent). The slates were split.

Transparency Project data can tell us a bit more about these groups of voters, leading to what might be dubbed the "Open-mindedness Index." Eureka's McCain voters were far more likely to vote the straight ticket, with 61.3 percent of them filling in bubbles Endert/Jager. Only 40 percent of Obama voters went with the straight Atkins/Clark ticket.

But Obama voters have no reason to be smug. They also scored nearly twice as high on what we'll call the "Apathy Index." Over 8.8 percent of them didn't vote in one or both of the two City Council races.

The City of Arcata is a political monoculture, more so than any other place in the county. In the top-ticket race this election year, Barack Obama got six times as many votes as John McCain (81-13). In some precincts, McCain fared more poorly than third party candidates running to Obama's left (see "True Blues," elsewhere in this issue.

Perhaps it's not surprising, then, that candidates from the Arcata City Council are remarkably in-step, politically. Plop those candidates down in just about any other place in the county and they would be all but indistinguishable. In their natural Arcata setting, though, small differences are magnified into major policy positions.

This year, the electorate chose Michael Winkler, Shane Brinton and Susan Ornelas over three runners-up (Michael Machi, Jason Grow and Geronimo Garcia). Since Obama voters were the vast majority in Arcata this election, it's no surprise that their choices in the City Council race were determinative.

Interestingly, though, the results wouldn't have been all that different if the Obama voters had all stayed home. Winkler was the top choice of Arcata McCainiacs, just as it was for their blue neighbors. McCain voters also picked Brinton. The only difference was that they greatly preferred Machi over Ornelas.

Citizens preferring left presidential candidates Cynthia McKinney and Ralph Nader voted in the City Council race exactly as Obama voters did, though with some nuances.

The "winner" map shows the first-place candidate's margin of victory over the runner-up. Clif Clendenen is green, Johanna Rodoni is red, Estelle Fennell is blue.


The June-November maps show the increase or decrease in a candidate's share of votes between the June primary and the November General election. Blue is up, red is down. A solid color indicates a shift of 10 percentage points.

The following maps are all colored according to the "stoplight" model: green is yes, red is no. Note: Unlike the above maps, the following have not been updated to take into account the Diebold error that erased 197 ballots from Precinct 1E-45. Results from that precinct -- it's the large appendage hanging from the center of the City of Eureka -- should be viewed with some suspicion.