Smith wins big; other contests too close to call 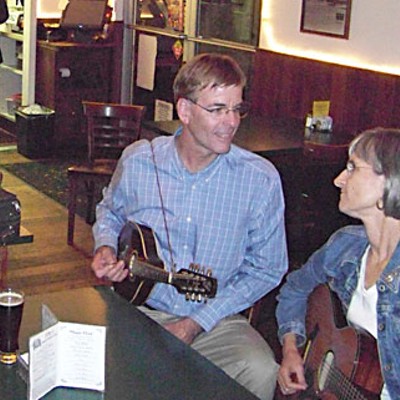 Note: full Humboldt County results from the Nov. 4 2008 election can be found here.

It was one of the longest election nights in recent memory. And after the clock turned 12, two out of the three main races on the Humboldt County ballot were still up in the air.

Third District candidate Mark Lovelace had 51 percent of the vote — enough to win the election with no need for a runoff — against challenger Bryan Plumley's 36 percent, with half the vote counted in that district.

Southern Humboldt's Second District seemed wide open with only 4 out of 27 precincts counted. Still, challengers showed early strength against the deceased incumbent, Roger Rodoni, even though the bulk of the vote in Fortuna — in the past, a Rodoni stronghold — had not yet been tabulated.

"Looking at this list of candidates — I know all of them, and I've talked to all of them, and I know they're working their hearts out right now," said Smith, who spent the evening watching votes being counted at the Humboldt County Elections Office. "Anybody that goes through this has taken a large chunk of their lives out — forums, questions, taking positions on hard issues. It requires a lot of homework."

It was one of the most important elections in years. A majority of the Board of Supervisors was up for vote, and two longtime incumbents were out of the race: Third District Supervisor John Woolley, who is stepping down, and Rodoni, who was tragically killed in an auto accident a little over a month before the election. The coming board is scheduled to make a decision that local governments in California make only once every 20 years — a revision to the "General Plan," an all-encompassing document that guides development over the long term. In addition, the board will have to deal with crippling cuts stemming from a weak economy, high gas prices and a state budget in ruins.

Nevertheless, the political campaigning this time around was subdued, at least by Humboldt County standards. There was none of the intensity or fervor of recent key contests, such as the 2006 Fourth District supervisorial contest between incumbent Bonnie Neely and challenger Nancy Flemming, the 2004 and 2006 Eureka City Council elections or the recall and reelection campaigns of District Attorney Paul Gallegos. The amount money raised and spent was light this time around, with one exception: The Rodoni campaign raised over $70,000, much of it after the candidate's death.

Perhaps the hottest contest this time around was down in the Second District, where circumstances made the electoral process unusual. The Rodoni camp, led by his wife, Johanna, who has since been appointed to fill out the remainder of his current term, had to get over 50 percent of the vote this time. If there were to be a runoff — if no candidate received over 50 percent — then the runoff would be between Clendenen and Fennell, both running to Rodoni's left in a conservative district.

Over 100 people gathered at the Rodoni party, which was held at Fortuna's Hot Brew pub. Among those present were Sheriff Gary Philp, Fortuna Mayor John Campbell, Rio Dell Mayor Bud Leonard and, of course, Johanna Rodoni herself. When the first absentee results came in, showing a surprisingly low Rodoni return — ahead, but not with a majority — Johanna Rodoni said that she wasn't concerned. "The fact that Roger is ahead in the absentees is a good sign," she said.

Still, the mood over at Clif Clendenen's party, held at the Eel River Brewery, was cautiously jubilant, with about 75 in attendance at the party's height. "I'm a little nervous," Clendenen said. "Win, lose or draw, I think it's been very positive. I've pulled a lot of people into the process." At press time, before the Fortuna ballots had been counted, Clendenen was running neck and neck with Rodoni, with Fennell a bit behind. While the other two campaigns wrapped up for the evening early, the Clendenen folks held on and dreamed of a November runoff against Fennell.

Fennell seemed to be thinking likewise. "We've dealt with a campaign that threw a lot of money into electing a legacy," she said of the Rodoni campaign. "I look forward to going into November.'

In the Third District, which is centered around Arcata, candidates Bryan Plumley and Mark Lovelace held parties for their supporters at two local bars. Candidate Paul Pitino stayed at home to listen to results, ordering takeout Chinese food for himself and his girlfriend.

Lovelace's lead grew throughout the night. At press time, with a little over half the precincts counted, he had broken 50 percent — enough, if the lead held, to give him an outright victory, without the need for a November run-off. In the evening, Lovelace joined with about 50 supporters at Arcata's Plaza Grill. In attendance were Supervisor Bonnie Neely, former Arcata Mayor Connie Stewart and outgoing supervisor John Woolley.

"We have a vision of what we want for the county," said Lovelace, referring to the all-important General Plan update. "We need a plan to get there."

Over at Humboldt Brews, Plumley supporters, including Supervisor Jill Geist and Arcata Mayor Mark Wheetley, kept their spirits high as it became clear that their candidate would place second. Plumley said that he felt certain that the Third District electorate wanted moderate representation on the board.

"I think the public wants consensus-building," he said. "They want bridge-building." If the election does go to November, he said, it will have a completely different character.

The election results were later than usual this time around, due to a 2007 ruling from California Secretary of State Debra Bowen. Last year, Bowen prohibited county elections boards from using equipment that allows precincts to electronically send their results to the central tabulating system. Instead, machines had to be physically carried back to election headquarters for counting.