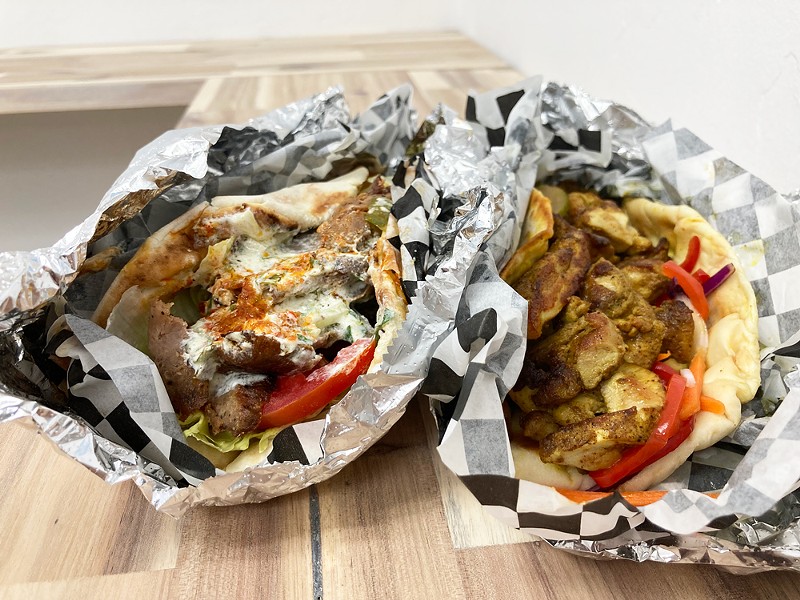 Photo by Jennifer Fumiko Cahill The namesake gyro and the chicken shawarma wrap at Gyro Shop.

The menu above the counter at Gyro Shop (1731 G St., Arcata) is as pared down as the place itself, with its metal chairs and narrow wooden counters. There's the headliner gyro, chicken shawarma, falafel, all of which can come on plates or wrapped in warm, thick pita bread, along with seasoned fries and a single Greek-leaning salad with kalamata olives and feta. A small refrigerator offers craft sodas, of which owner Alex Begovic, working the register, recommends the chocolate one.

Opened June 20, Gyro Shop is a downshift from the formal setup at Le Monde in Eureka, where, until he closed it three years ago, Begovic won a following with staples like duck confit and crème brûlée. But he says he sees it as a return to the most elemental aspects of running a restaurant, both in terms of cooking and interacting with those he's feeding.

"As a chef, I feel like it's just going back to the basics," says Begovic. "It's street food but it's more. It's ancient — the flatbread is the first bread that was ever made," he notes, dating back to ancient times in the Middle East, Africa and Asia. "That's what I think about when I'm prepping the food. All this food could be made with live fire and rocks," right down to grinding the flour, vegetables, chickpeas and meat.

Shawarma, which has its origins in the Ottoman Empire, is something Begovic says he grew up eating. Born in France, he spent part of his childhood in the former Yugoslavia, from which his Serbian father often traveled to Turkey, which had a strong influence on local food culture. Later, the family relocated to Paris, with its growing Turkish and North African populations, particularly former French colonies Algeria and Tunisa, and the markets that sold ingredients for their respective cuisines. He recalls visiting the Latin Quarter in his youth and happily eating the Greek versions of grilled meat on pita on the left bank of the River Seine with his brother.

Begovic says the shawarma he makes nods toward its Lebanese history, with "every spice that exists, almost," he adds with a laugh. The turmeric, ginger, paprika, cumin and coriander blend he uses on the organic chicken thighs is reminiscent of a curry mix and is offset by rice vinegar pickled slivers of cucumber, carrot and red onion, and shredded cabbage. For the accompanying harissa sauce, he had to tinker with tiny Sicilian hot and Aleppo peppers to approximate the "Gypsy" peppers he's had difficulty sourcing locally.

Research into the first mass production of the gyro in 1970s Chicago, as well as some trial and error, led Begovic to a relatively simple blend of lamb and beef spiced only with garlic, salt, pepper, marjoram and red chili flakes that lets the flavor of the meat shine through. Pureeing it well and then some, he explains, releases the fat and collagen, and gives the gyro a "fluffed up" texture. Then the trick, he says, is to mold and freeze the slurry so it cooks layer by layer as it turns on the vertical spit.

"Since I have so few things on the menu, I never have to go cheap," says Begovic, who contends that the pricier rice bran oil in the fryer makes a notable difference in the French fries he tosses in tapioca flour and deep fries twice, as well as the parsley-heavy falafel. "Hard, crunchy outside and moist inside — that's the name of the game." He orders the pitas but everything wrapped inside them, he says, is house made.

Serving customers and talking to the folks he feeds is another upside to paring down for Begovic, who's one of three cooking and ringing up orders at Gyro Shop. "In fine dining, you can kind of lose all that," he says, lamenting the inability to come into the dining room to meet his clientele at Le Monde without tasks piling up in the busy kitchen. He says he doesn't miss the hype necessary to justify fine dining prices — with ambiance, with marketing yourself — as the cost of ingredients and rent rise and profit margins shrink. "As a chef, you constantly have your ego played and you start believing your own bullshit."

Like so many restaurateurs, Begovic says the pandemic forced him to pause and think about what he wanted in a business. He thinks scaled back models like Gyro Shop are the direction more food businesses will have to take to survive. He's looking toward the looming influx of Cal Poly Humboldt students who are used to more diverse food offerings as a big part of his customer base.

Stuffing the pitas and rolling them in foil, Begovic says he often gets the pleasure of hearing people reminisce about their experiences all over the world eating modern versions of these ancient foods. "Le Monde means the world," he says, "and that's my vibe with food anyway."