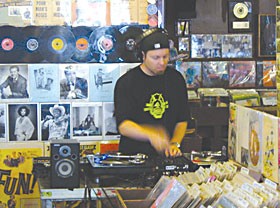 For whatever reason, probably because I write about music, people tend to assume I am a musician. I'm not. Well, I did play in the marching band when I was younger, but gave that up when forced to parade in a Sgt. Pepper outfit during half-time at high school football games. For years people having been asking, "What instrument do you play?" and for a long time I had a pat answer: "I play the record player," which sort of worked because I'm a longtime record collector. Then along came guys like DJ Kool Herc and Grandmaster Flash who established DJing and record manipulation as one of the famed "Four Elements of Hip Hop," turning two turntables and a mixer into a musical instrument and in the process paving the way for later masters of the form like DJ Shadow (aka Josh Davis) and Cut Chemist (aka Lucas MacFadden), two turntablists whose collaborations border on the mythic.

The two friends both got into the art in the early '90s: DJ Shadow was an Aggie, a UC Davis college radio deejay, when he connected with Lyrics Born, Lateef and Chief Xcel and Gift of Gab of Blackalicious to form the Solesides crew and an associated record label that would eventually morph into Quannum Projects. Cut Chemist came up in Los Angeles, scratching with the Unity Committee, the Jurassic Five and taking time off to tour with Ozomatli.

Like most DJs they both spend a fair amout of time searching through piles of dusty vinyl in thrift stores and record shops -- crate-digging , as it's called in the world of hip hop. Their first major collaboration came in 1999, a joint mix, Brainfreeze, based exclusively on super-rare soul and funk 45s (crate-digging treasures) and performed live in a run of legendary shows that basically lasted until the irreplaceable records wore out. A tour behind a second mix, Product Placement, followed in 2001.

Earlier this summer the duo reunited for a show titled The Hard Sell , on Cut Chemist's home turf, if the Hollywood Bowl counts as such. This weekend they're together again for the eclectic Treasure Island Music Festival in the middle of the San Francisco Bay, sharing Saturday's bill with Thievery Corp. and Gotan Project , among others. That gig would have been a one-off except that AS Presents booked them for a Monday, Sept. 17, show at HSU's Kate Buchanan Room that will surely go down in history.

In the meantime DJ Shadow is spinning records daily at Village Music in Mill Valley, a great record shop that's closing at the end of the month after six decades in the business. Those who saw Pink Martini's fine show on Sunday heard singer China Forbes lament the passing of that band's favorite record store in Portland and note that Arcata is lucky to have two good record stores. Truth is we have three, and if you want them to survive you might consider buying an occasional record or CD from them now and then.

Jambalaya celebrates 34 years in business Friday with a show featuring "special secret performers." Can you keep a secret? An invitation showed up via e-mail today from guitarist Ryan Roberts noting that, "After eight months of group therapy and lawyers bills, The Absynth Quintet has reunited and managed to release their 2nd CD, Kevlar Mariachi Pants . Come join the quintet for their CD release party combined with the Jambalaya's 34th birthday on Friday, Sept. 14."

I should mention that this was preceded by Ryan (who is in A.Q.) dropping off a copy of said CD for a preview. It's playing as I type. It's a live recording, live and lively with that Hot Club of Humboldt-style gypsy-grass sound you know and love, which is to say fast, clean-as-a-whistle pickin' and lots of it -- like fried ice cream: cool and hot at the same time. The eight songs include three each by Roberts and mandolinist Christopher "Bird" Jowaisis , one by banjo man Ian Davidson and a Coltrane cover. Drummer Mike "Tofu" Schwartz and upright citizen bassist Rudy Luera propel the excursions ever forward. Pick up a copy at your local independent record store. Other "special secret" birthday musicians? Dunno, but I'm hoping some of the Starliners show up.

Saturday, Sept. 15, at the Jam it's Chiptunes night, a convergence of blippy digital nerdcore artists from up and down the West Coast. In July, no less an authority than the Washington Post reported that "the first Nerdapalooza concert" was planned for a September weekend in Eureka with "two days of 'geek music' from more than 30 nerdcore, nerdmetal, geekpop and video-game rock bands." That grand plan by Humboldt's own dj[hexWarrior] has been postponed for lack of sponsorship, but he did pull together Tha Fruit Bat from Sacramento (blippy drum 'n' bass), glitchpoppers Wyatt Gurp , K9d/ND from S.F. and vid-game rocker Square Wail from Seattle, who makes music solely on handheld Gameboys.

Friday is also Arts! Arcata night and that means two things: art/music all over town and another Unauthorized Art Studio Party out in the Aldergrove industrial park, this time with music by AfroMassive , DJ Knutz and The Janky Mallets , plus tricks by Shantaram the Magician . I went to one earlier this summer and it was a ball, in part because the lack of neighbors meant the Mallets could pound out a batucada into the wee hours.

The weekend-long Steelhead Music Festival and Fieldbrook Bazaar begins Friday evening at the Fieldbrook Market, with music by Kulica . Saturday there are bands behind the store all day (too many to mention here). The fun continues Sunday.

On the waterfront Saturday at The Vista (in GoFish) it's The Monster Women and Olympia's Old Haunts , whose drummer is Tobi Vail, an original member of Bikini Kill. Yes, "The Vista is back!!" says newlywed M. Woman Courtney, adding "I thought, since it's so close to Halloween and the bands are The Monster Women and The Old Haunts, it would be fun to make it a pre-Halloween show, so dress it up and come in costume!! We will!"

For jazz fans we have saxophonist Phillip Greenlief returning to the Graves Museum Sunday, Sept. 16, for an afternoon show with The Lost Trio. (The trio's 2000 concert there became half of the acclaimed CD, Live at Avalon & the Graves.) Expect "re-imagined pop tunes" from a nearly completed album tentatively titled Solid Gold Hits .

On the wilder side of jazz there's Skerik's Maelstrom Trio , Tuesday, Sep. 18, at the Red Fox Tavern, with Skerik's saxophonics plus New Orleans free-jazzers Brian Coogan from the Stanton Moore Trio on Hammond B3 and keys and Simon Lott from the Charlie Hunter Trio on drums and toys.

I think I've received a half dozen e-mails asking me if I'm going to Earthdance this weekend. The latest came this morning from Kat from Mendo, one of my neighbors at Reggae. She reiterated what I've heard from others writing, "I highly recommend it. I go to a lot of music festivals and events, and this one is by far my favorite -- I love the combination of activism and music, the influence of the wisdom of elders from throughout the world, and the combination of old school hippies meets Burning Man fire youth ..." You know, it's tempting, and the music line-up is good ( Zap Mama , Les Nubians , Medeski, Scofield, Martin and Wood , Ozomatli , ALO etc.), but there are a bunch of things I want to do closer to home, so once again I'll say maybe next year.