Elk in the Surf 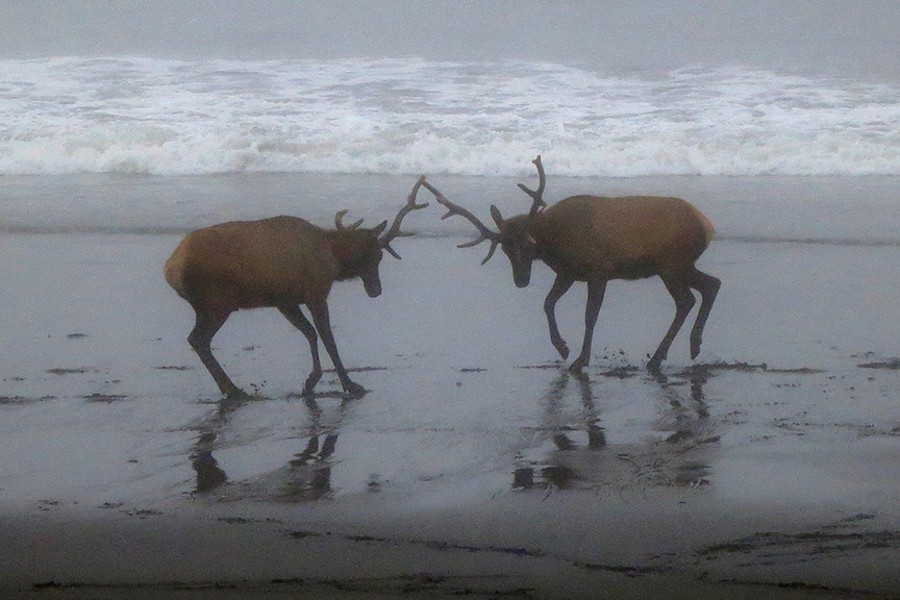 Young bulls play-fight on a foggy July morning at Usal Beach in the Sinkyone Wilderness.

One morning this past July, Louisa and I were sipping coffee in our camper van. We were parked on the remote Usal Beach in the Sinkyone Wilderness when they emerged from the early morning fog like ghostly apparitions — a stately parade of five bull elk on their way to the beach for a morning play-date. They skipped in and out of the surf, chasing and sparring with one another (for a video, youtube.com/watch?v=AeVHWZF6Y0g). Come September and the annual mating season, that play turns serious, even deadly.

Their most distinctive feature is, of course, those daunting male antler racks (the smaller females don't have antlers). Every February or March, the antlers fall off, and within a week or so, new ones start to grow — at the incredible rate of nearly half an inch a day, or a foot a month. Antlers are made of bone-like keratin, which is enclosed in the "velvet," a soft membrane that's thick with blood vessels. In August, the blood supply dries up, and the velvet begins to shed, revealing fully grown bare bone.

Those antlers are put to potentially lethal use during the September-October mating season, when bull elk vie for control of "harems" of female elk. Contests start with loud "bugling," when the males bellow and whistle, both to attract mates and to warn off other bulls. A challenger will approach the harem's alpha bull "bugling, urinating and tossing turf with his antlers" according to a National Park Service fact sheet. Usually, one bull will retreat before serious injury happens, but not always.

Mating is followed by an eight-to-nine month gestation period for the females. Typically, a pregnant cow isolates herself before giving birth to a single calf. Two weeks later, she and her newborn rejoin the female herd. Meanwhile, older males live alone or in bachelor herds, like the group we saw on the beach.

Before Europeans invaded this part of the world, Roosevelt elk (Cervus elaphus roosevelti) roamed in large herds between San Francisco Bay and Vancouver Island, east to the Cascade Mountains in Washington and Oregon. Hunted to near-extinction, their numbers were down to a few hundred by the time serious conservation efforts began in the 1920s. Today, the come-back of these great elk, the second-largest of the deer family after moose, is a conservation success story. In California, for instance, the National Park Service estimates that only 15 Roosevelt elk were living in the State in 1925. Today, that number is well over 1,000.

You don't have to go to Usal, of course, to see Roosevelt elk — it's hard not to spot a few if you drive north on Highway 101! Several prime viewing areas are located in the Redwood National and State Parks, north of Orick. Elk Prairie is right alongside the Newton B. Drury Scenic Parkway (old Highway 101). Check out Davison Road and Gold Bluffs Beach while you're up there. Be careful, though, especially at this time of year when the bulls are in a fractious and lusty mood. Give them lots of space and use a telephoto lens.

Barry Evans (barryevans9@yahoo.com) wonders what it would be like to be an alpha male.