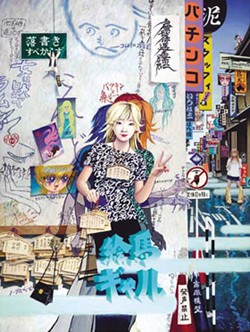 The exhibition filling the Thonson Gallery at the Morris Graves Museum of Art titled "A Bridge to Japan: Orr Marshall Retrospective" is a tribute to the breadth and scope of work by the Eureka-based artist.

Marshall says his path to Japan began in the mid-'60s at Oakland's College of Arts and Crafts where he was teaching after finishing his master's in art at Yale. One of the students in his graphics class was a Japanese woman named Fukiko. Always hungry for knowledge, Marshall was studying the Japanese language at the time and tried out his vocabulary on the woman who would eventually become his wife. A lifetime friendship and partnership resulted from the conversation that ensued.

"She helped me get a scholarship to study in Japan at the National University of Fine Arts," he recalled when I met him at the museum last week. Part of the deal was that they would marry when they got back from Japan. "We did. Then we went back to live in Japan from 1968-'71. My first son was born there."

The retrospective includes just a few paintings done in Japan, but many others show the influence of his immersion in the culture. Modern Japanese imagery fills two large paintings placed at either end of the gallery, "Manga Girl" and "Graffiti Girl." For someone who does not speak Japanese, the paintings cry out for translation.

The almost life-sized "Graffiti Girl" flashes a peace sign as she stands before a wall decorated with graffiti and posters. She wears a wooden plaque covered in calligraphy around her neck and holds similar plaques in her hand; more adorn the wall. Around the corner we see another girl standing in a street lined with dozens of advertising signs.

"I can tell you a lot about this painting," said Marshall. "In general it was the result of my first visit back to Japan after having lived there 32 years earlier. Our son Steven got married in Japan in 2003 and our whole family went to the wedding. Not having been in Japan for so long, it was an overwhelming experience. In a way it was just like the Japan I had lived in years ago - the feeling is the same, but the buildings are much taller and there are a lot more people.

"The thing that inspired this painting was something I didn't used to see: There are quite a few blonde girls, not to mention other colors. The most common is the color you see on this girl [in the alley], a light brown they call `tea color.'"

He admitted that "Graffiti Girl" is not exactly an accurate translation of the Japanese title, " Ema Gyaru ," which is painted in three-dimensional lettering across the piece. Gyaru , "girl," is closer to "gal," and refers to a fashion style that often includes unusual modern makeup and hairstyles.

"It refers to these wooden plaques, which you can pick up at a Buddhist temple or a Shinto shrine for a donation. On one side they have a picture, usually an image of an animal or a symbol or a crest, something related to the particular temple or shrine. The back is blank; it's a place where you can write a wish and hang it on a rack in the temple in hope that it will come true."

The horse is reference to the past when actual horses were donated to the temples. "That eventually proved impractical for the owners of the temples, so the custom gradually switched to a painting of a horse on a wooden plank. Nowadays it's not always a horse.

"I saw them when I lived there years ago, then again when we visited for the wedding. I started reading some of the wishes and one caught my attention because it was so cute, so I wrote it down in a notebook.

"What this one says," he noted, pointing to the plaque around the girls neck, "is, `I want to be a singer when I grow up.' Eventually I put the hair, the style and the plaque and a bunch of other things together. Actually no one would dream of hanging a plaque around her own neck, and it wouldn't be on a city wall, but in a temple, but for my own purposes I played with the tradition."

The alley's "forests of signs" as Marshal described them, are a constant in the urban areas. "These signs, which would ordinarily be for stores and businesses, instead are my own inventions. You'd have to read Japanese to know it, but they are the names of singers and bands -- to tie together with the wish on the plaque. There are more singers names in the graffiti on the wall."

Everything seems to be covered in calligraphy, even the girl's blouse. Marshall explained that the different writing styles reflect the variations seen in Japan. "You can write horizontal or vertical or even diagonal. You can do it in elegant brush calligraphy or scrawled graffiti, in squared-off lettering or elaborate characters. It shows the mixture of traditions you see in Japan from modern styles to ancient traditions."

Pointing to an elaborate bit of text on a piece of paper on the wall above the girl he explained that it is done in a Chinese calligraphy style. "By coincidence, it says the same thing that Vinnie DeVaney on KHSU says at the end of his program, Fogou: Nam yoho renge kyo.' It's a Buddhist scripture of a particular sect. I'm not sure of the exact meaning, but it says something like,The scripture of the sacred, wonderful lotus flower.' Here it's in a highly stylized calligraphy form. I wrote it there, not to get Buddhism into the painting, but just because I wanted to use the style, which is known as bearded calligraphy. I just liked the calligraphy."

A tension between modern and traditional culture is shown in a road sign depicting a stylized silhouette of a Geisha girl with a paper umbrella covered by a red slash. Marshall notes that the sign beneath it reads, "except on regular holidays," one of many puns built into his work.

The show demonstrates the range of Marshall's work: paintings in styles from pop art to a modern take on traditional scroll painting and on to sculpture and animation.

Marshall emphasizes the fact that the retrospective is not arranged in any chronology, rather according to different mediums and techniques he has explored. "And it's not like a series of styles I'm going through or different periods. Many of them are still going on, things I started in Japan 40 years ago that I'm still doing."

Cases hold reels of hand-painted film and preliminary sketches for other works in the show including "Graffiti Girl." Standing in front of one case Marshal explained how the stack of sketches of the girl on tracing paper inspired the multi-colored shadow girls on the wall behind the girl.

"The drawings were dropped at random on top of each other on a table in my studio and it hit me that the arms and heads overlapping would be more interesting than just one figure. As I was working on it, it occurred to me that it could be like the animated title sequence for a film. You pan across a wall covered with graffiti; fingers of fog come in; drawings of the girl against the wall come in and as she moves, different positions appear until the last drawing becomes a three-dimensional live girl who picks up these plaques and hangs them on the wall."

Marshall explained many more details in the painting: the crocodile tear on a sign, the Mt. Fuji traffic cone, the slime monster, Hello Kitty, the bullet train in the distance -- but we only scratched the surface. I imagine that this retrospective does the same. A roomful of work only offers the beginning of the story of this amazing artist.

"A Bridge to Japan: Orr Marshall Retrospective" is sponsored by Tomo Japanese Restaurant, which, not coincidentally, is where you will find Fukiko most of the time (it's her restaurant). A reception will be held during Arts Alive! Saturday, Jan. 4, from 6-9 p.m.

Marshall will also present and discuss his film work in a show titled "Experimental and Animated Films" on Friday, Jan. 12, at 6 p.m. at the Graves Museum. Admission is free. The Morris Graves Museum of Art, located at 636 F St., Eureka is open to the public noon-5 p.m., Wednesday through Sunday.