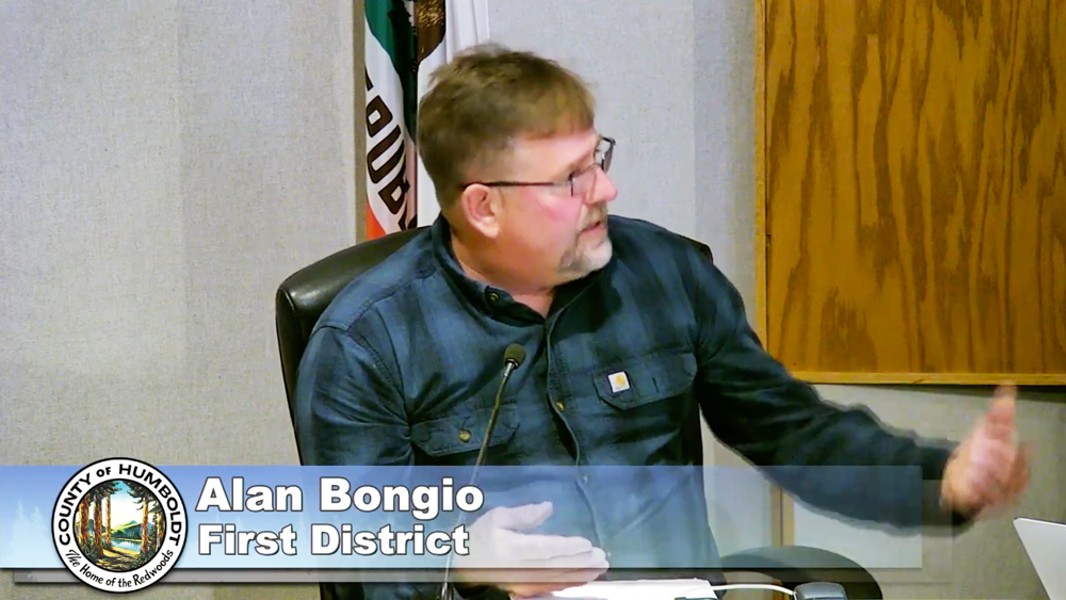 File photo Humboldt County Planning Commissioner Alan Bongio, the focus of pointed criticism and calls for removal since his racist and biased comments at the commission’s Aug. 18 meeting, has resigned to “focus on his family and business.”

Embattled longtime Humboldt County Planning Commissioner Alan Bongio, who was censured by the Board of Supervisors in September for comments made while chairing a meeting in August that were widely construed as racist and biased, has stepped down.

First District Supervisor Rex Bohn, who appointed Bongio to the commission and said in September he would not remove him despite mounting pressure to do so, has indicated he intends to appoint Iver Skavdal to the position.

"Alan Bongio, my planning commissioner for the last 10 years and long time chair of the commission, has stepped down to focus on his family and business," reads an email from Bohn announcing Bongio's resignation. "I wish him the best in the future."

In August, acting as chair of the commission as it considered permit modifications and a new permit necessary for local developer Travis Schneider to resume construction of his family home after violations of his coastal development permit led to a county stop-work order, Bongio was openly dismissive of concerns raised by the Wiyot Tribe and the Blue Lake Rancheria. Repeatedly referring to multiple, distinct tribes as "the Indians," Bongio accused them of acting in bad faith, playing a "game" with cultural resources to extract more concessions out of Schneider and reneging on a deal, though Bongio said he had "another term for it, but whatever."

Tribal officials and others found Bongio's comments deeply offensive. In September, the Board of Supervisors voted unanimously to censure him and ask him to step down as the commission's chair, though Bohn said he refused to remove him from the post, noting he's known Bongio for decades and saying, "I can't fire my friend. I'm sorry."

But the fallout from Bongio's comments continued, coming under increased scrutiny as it was discovered Schneider's permit violations were far more extensive than previously known, with the home under construction twice the permitted size, Schneider having brought in 10 times more fill dirt than allowed under his permit and having begun construction without a required septic permit. In October, Schneider confirmed to the Journal that Bongio had also personally done some pro-bono concrete work on the project in 2019, likely during a period in which Schneider had begun building without a building permit for the project. Bongio failed to disclose his work on the project when it came before the commission in August, though he disclosed that he'd been to the project site and spoken with Schneider numerous times about it.

At the commission's Sept. 1 meeting, after his prior comments had drawn widespread criticism, including from Bohn, Bongio offered a brief apology to "the tribes if [he] in any way offended them." He did not, however, apologize specifically for any of his conduct or comments.

The Wiyot Tribe filed a formal complaint with the county in September, alleging that Bongio's "racist and offensive language" created a "hostile environment" for staff of its sovereign tribal government as they worked to fulfill their consulting duties under federal and state law.

When the Humboldt Community Services District board, of which Bongio has been a member for 24 years since taking over the seat his father, Aldo Bongio, who held it for 34 years, took up an unsuccessful attempt to remove him from his role as board president, Bongio struck a defiant tone. Specifically, he said he'd said his "apologies" for his conduct at the Aug. 18 Planning Commission meeting and was told his "apologies didn't mean anything," but said his "conscience is clear."

In October, the Planning Commission penned a letter of apology to local Wiyot area tribes, stating "unequivocally" that Bongio's comments "were insensitive, racist, inconsistent with the values of the county of Humboldt, biased and understandably may have shaken your faith in the impartiality of this commission."

Bongio, however, remained defiant, though he voted in favor of sending the letter. At the October meeting, Bongio said he was not "trying to make excuses" but then seemingly mounted a defense of his own conduct, saying if the commission does not "ask hard questions" and "delve into things," it would be an "injustice to the county," before seemingly again questioning the integrity of the tribes he'd offended, saying "there's some things that didn't add up that night."

Last month, voters soundly ousted Bongio from his seat on the Humboldt Community Services District Board, electing relatively unknown challenger Julie Ryan with 35 percent of the vote to Bongio's 26 percent.

Nonetheless, Bongio's resignation from the Planning Commission — coming two days after a major earthquake and two days before a major holiday weekend — came as a surprise to many. It also represents a noteworthy change on the commission amid a host of large-scale development projects on the county's horizon, including the Nordic Aquafarms project on the Samoa Peninsula and the prospect of an offshore wind farm becoming a reality. As such, Skavdal joins the commission as some potentially huge decisions loom in the body's future.

A fifth-generation Humboldt County resident, Skavdal is a registered civil engineer who attended Humboldt State and Chico State universities and resides in Ferndale. Skavdal began his career with the local engineering firm Winzler and Kelly, ultimately leading the company as its CEO and investing as an owner. In 2011, the company was acquired by the global firm GHD, based in Australia, and Skavdal remained on as an employee and shareholder, working his way to leading the company's U.S. arm.

Now retired, Skavdal "would like to give back to the community that gave him his start," according to Bohn.

"I am excited as we move forward with offshore wind and Nordic Fish Farm to have someone of his expertise and who has overseen projects of this size and magnitude," Bohn wrote. "I am fortunate to find someone of this caliber to appoint to the Planning Commission and look forward to his contributions."

According to Skavdal's Linkedin page, he still works with GHD as a consultant.

As to Schneider's project — the 20,000-square-foot home under construction on Walker Point Road off the Indianola Cutoff that Bongio advocated so vociferously for back in August — its future remains uncertain. As the wooden framing and foundation work already completed sit bare to the elements, being pummeled by Humboldt County's rain, Humboldt County Planning and Building Director John Ford told the Journal efforts are ongoing to reach a resolution acceptable to Schneider, the Wiyot Tribe, the Blue Lake Rancheria, the county and the California Coastal Commission, which has appeal jurisdiction over the project after Schneider began construction in an area different than permitted and encroached on the required setback from an environmentally sensitive wetland.

"The county has been diligently working to identify an appropriate response and process for what has occurred," Ford said, declining to provide further detail at this time.